Sunday September 27 at Reflections try on a different hat (or jockstrap, as the case may be)

Debbie Diamond lights up the urinals 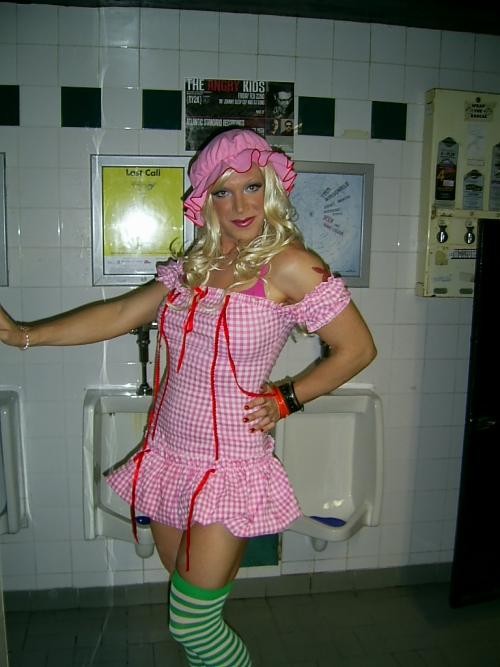 Hissyfit, everyone’s favourite rock and roll drag show, returns Sunday September 27 at Reflections, featuring drag performances by A/V, Big Time Operator (Dead Milkmen cover band with Mark Black), a Smiths tribute band featuring Jason Haywood, The Fat Stupids, The Bad Arts, Get Wrecked, The Wides, The Pinheads and Darby Hall. Hosted by Debbie Diamond ($5/$2 if you’re in drag, 10:30pm sharp start time).“The first Hissyfit was in 2003, it started off as mainly punk and hard rock with bands like The Heelwalkers and Dead Red playing the first one,” says Craig Hamlin, organizer and participant. “Over the next couple of years lineups became more diverse and bands like North of America, the Superfantastics and the Grass played.” It’s strangely compelling to see your favourite bands in a different wardrobe, but Halloween isn’t exactly coming early to Reflections. “It is a unique phenomenon when bands are in drag, it’s like all the inhibitions are stripped away and suddenly performances become more primal and overtly sexual in nature,” says Hamlin. “Add in the cheap thrill of seeing girls dressed as fellas and noticing which boys make the prettiest ladies and you have a night that can't be beat!” There’s really no other game in town if you’re looking for a Sunday night that’s “got the best drag queen in town going crazy with a live band behind her,” says Hamlin. “There’s also punk bands in heels, an ECMA winner fronting a Smiths cover band, dance music from A/V, kids from Truro, and even a Dead Milkmen cover set from award winning author and valedictorian Mark Black.”