Traveling across the country as an exhibit *Defining Moments: Discovering Our Canadian Stories* brings a little national pride from young talent to Parentheses Gallery. 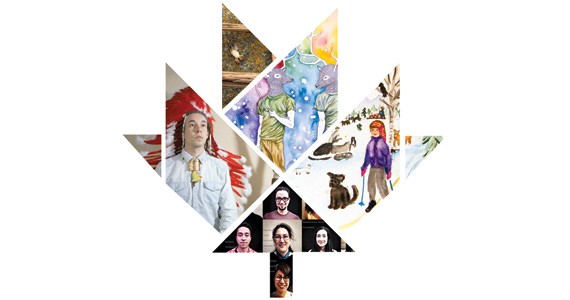 We're Canadian and we're proud. We have moose, hockey, mountains, double-doubles, the Peggys Cove Lighthouse---all those iconic (read: stereotypical) things that make your heart flutter a little when you think of our great nation.

On Friday, a new art exhibit in Halifax will showcase some of that Canadian-ness, perhaps a little more artistically and a bit more in-depth than the Tim Hortons cup you were sipping from this morning.

Defining Moments: Discovering Our Canadian Stories is an art project that aims to help increase youth attachment to Canada. For a contest, youth aged 13 to 30 submitted artwork---ranging from painting to photography to beadwork and beyond---that expressed their individual connections with their country.

"Through art, it allows youth to sort of evaluate what's important to them in a social, geographical and political context, and what they value and take issue with," says project manager Annika Waddell.

"Art does have this extraordinary way of being able to identify those things and share it with other people."

The project, which also involved workshops for youth to discuss the meaning of their Canadian identity, was put on by Canadian Heritage and Taking It Global---an organization that provides information to inspire youth to get involved with global issues.

Although the contest closed March 1, there will be a series of June exhibits geared towards showcasing emerging artists, and they are hitting cities across the country now. The top 26 winners of the contest will be announced on July 1, which will then be followed by a travelling exhibit to display the winning pieces.

Waddell says it's important, especially for youth, to get that dialogue going. "I think in a lot of ways, if youth are able to understand their own identity by exploring their own experiences, then they're obviously more likely to accept those around them and accept those who have different experiences and different identities.

"I know a lot of issues that the youth have brought up have a lot to do with the environment. Either it's celebrating what we have or it's concerns that it won't be there in the future," Waddell adds.

Waddell says ideas of immigration and migration---both in a positive and negative sense---were also hot topics. "Some people feel like they're still being marginalized and others feel that they're so grateful that they were able to move here---they have so much more freedom."

"I suppose in the short term, the idea is just to keep that dialogue going and also for the viewers to be able to better understand what youth are talking about."