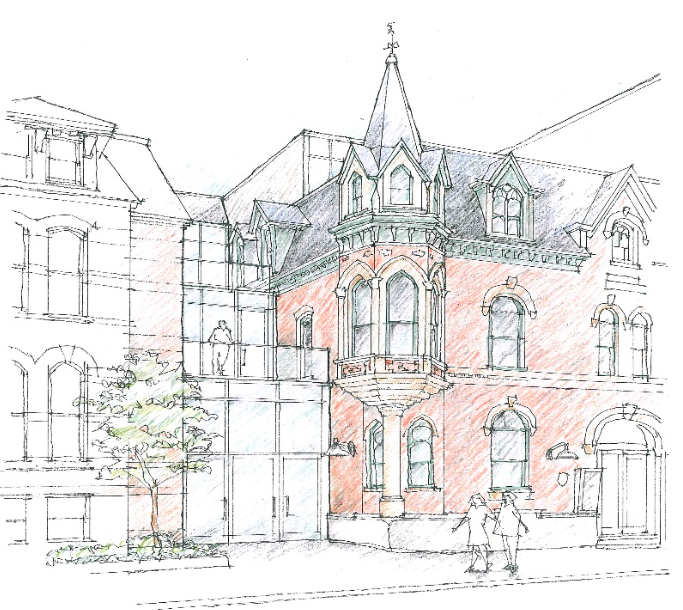 Plans were unveiled tonights at a public meeting held by the Friends of the Khyber and the 1588 Barrington Building Preservation Society to save Halifax's beloved downtown arts incubator.

The not-for-profit consortium has been working with community consultants and architects over the last year on the plans, which include a new accessible elevator, a shared atrium and fire escape with the Neptune Theatre School, expanded office and retail space, several gender-neutral bathrooms and an 80-person multi-use theatre on the third floor in the former Turret Club.  A brand new fourth floor is also being proposed, which will provide a rooftop patio and more rentable office space to offset operating costs.

Joel Plaskett, the Khyber-loving Dartmouth musician who’s helped lead the long fight to make sure the heritage property wasn't sold off by HRM, says the renovations will keep as much of the original building as possible—including mouldings, fireplaces and floors.

“It preserves everything I love about the history of the place,” he says.

But that’s all still dependent on Regional Council's approval.

The not-for-profit is asking council to delay any decision on selling 1588 Barrington Street for one year to allow time to fundraise renovation costs from private and public donors. After which, with council’s approval, HRM will sell the property (likely for $1, the same price the city paid for it) to the preservation society,

A one-time financial contribution will also be asked for from municipal, provincial and federal levels of government. Halifax South Downtown councillor Waye Mason, in attendance at tonight’s meeting, pegged that one-time contribution as in the range of “a couple hundred thousand” dollars.

That’s a much cheaper price than the initial $4-million HRM estimated for renovating the Khyber. It also takes the burden of caring for the deteriorating structure off of the municipality and helps bring about the Barrington Street arts incubator council has repeatedly tried to create.

“Now, we're able to get a renovated building, an arts incubator, the commercial components to this will actually pay tax..that's pretty good,” Mason says. “I think the majority of councillors are going to see the benefit of this.”

The Coast
Friends of the Khyber's Emily Davidson presents some of the upgrades planned for the Khyber's basement.

The 127-year-old municipal heritage building was home to the Heritage Trust and Khyber Arts Society until February of 2014, at which point the municipality terminated both tenants’ monthly leases over asbestos concerns. Council later approved a three-year grant of $45,000 to supplement the KAS’ efforts in finding a new home until renovations could be completed.

Several months later, to the shock and horror of many, the Khyber appeared on a staff report listing surplus municipal properties to be sold off.

After public outcry and some words from Joel Plaskett, council saved the building and gave the Friends of the Khyber six months to come up with a financially-viable formula to save the structure. It appears they’ve done just that.

Friends of the Khyber organizer Emily Davidson says plans have already been submitted to city staff and organizers have met individually with councillors to answer their questions. Plasket says he’s hopeful about council's upcoming decision.

“This is a vetted, year of work with a lot of professionals involved,” he says. “We really feel like it is a good recipe that can work, that recognizes the city has wanted to divest themselves of the building. It honours the fact that they don't want to be landlords, and they don't want to deal with the headache of managing an arts centre.”

Plaskett also urged those in attendance tonight to write their municipal leaders asking to support these plans. The staff report recommending council approve or reject the plans will come up for vote at the end of the month, or the first council meeting of February.