Here's to what Halifax is getting right

Some of our favourite folks tell us what—if anything—is working well in HRM. 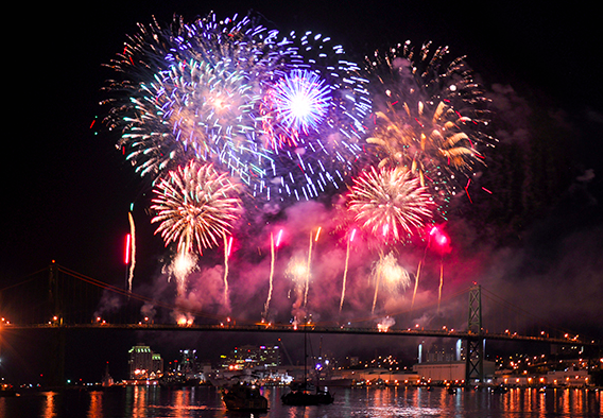 VIA HRM
Constant fireworks were surprisingly not on anybody's list.
Most of the news in 2017 has been spent documenting and/or trying to hide from all the horrible garbage fires happening around us. Here, at the end of the year, we instead wanted to raise a glass of kindness to those who are making this city better—the local points of lights in an otherwise abysmally dark year. Those things that offer some hope. So we asked some of our favourite people: What (if anything) is working well in Halifax? Here’s what they had to say:

“We’ve accomplished getting the message out especially after last year’s 12 homicides. The awareness is at an all-time high now. People talk about how to prevent violence; people are talking to their kids.”
—Quentrel Provo, Stop the Violence

“The Integrated Mobility Plan was a good news story. The question will be if council sticks to it in 2018, and what will the province do to fuck it up.” —Peter Ziobrowski, Action Group for Better Architecture

“There’s lots of interest in different institutions and organization on reconciliation and improving relations with the Indigenous community. I also saw the welcome sign into the city now says so in English, French and Mi’kmaw. A small, symbolic step, but a good thing.” —Naiomi Metallic, chancellor’s chair in aboriginal law and policy at Dalhousie

“Leave Out Violence: Their folks are doing fantastic work with youth who have histories or experiences of violence. This year they have really deepened their work, especially with aboriginal youth in urban and rural settings.” —Robert Wright, social worker

“Low-income bus passes, social issues like the mobile food bus—that’s something the city wouldn’t usually do and it’s nice to see the city taking on that leadership, especially in poverty reduction.”
—Lindell Smith, Councillor

“More and more people are recognizing that politics isn’t just about what happens in City Hall or Province House and are bringing their politics into the streets, the workplace and the home.”
—Chris Parsons, health care activist and Opinionated columnist

“Although it is slow-acting, this city has been active in a lot of important conversations. But what we need is action and complete solidarity with our BIPOC as well as our queer and trans communities. We have created our own safe spaces. We need help from the city to keep them that way.”
—Joee Smith, queer performer

“I would just call upon the arts organizations of the city to reflect on better practices to support community members, especially in light of some challenging times we’ve had. That includes CKDU.”
—Francella Fiallos, CKDU programming and development director

The unacknowledged work that racialized and BIPOC women do (especially our trans, two-spirited, queer, non-binary and differently abled sisters). It’s always important to recognize the importance of our individual privileges and how all of our actions have unintended consequences that we all need to be aware of.”
—Kati George-Jim, Dalhousie board of governors

“I don’t have much to say except that I believe we are having a more open dialogue about systemic racism, which has plagued us for centuries. The more honest communication we can have, the more effective we can be in stamping it out. I am grateful for those in our community who are speaking out and for those in government and industry who are willing to listen and act positively to bring about change.” —Rhonda Britton, pastor at Cornwallis Street Baptist Church