Here are the 12 local books that topped our reading lists in 2022 | Arts + Culture | Halifax, Nova Scotia | THE COAST

From Ann-Marie MacDonald’s 700-plus page comeback to the only World War Two book about Halifax you ever need to read.

When it comes to local reads, 2022 has been one for the books (lol/sorry): From the return of giants of the field (like Ann-Marie MacDonald’s first novel in eight years) to emerging voices (like first-time author K.R. Byggdin’s novel about a queer youth finding their place in the world), there’s been no shortage of stories to stuff your bookshelf. As indoor season approaches, we’re compiling some of the buzziest and best books of this year. Here's a dozen, presented in alphabetical order.

Abolitionist Intimacies by El Jones
Activist El Jones has spent a decade doing prison justice work, so when it comes to imagining alternatives to the current system, there are few voices who can equal her expertise. Here, Jones explores the abolition of prisons through the lens of Black feminist principles (like care and collectiveness). The book begins by tracing the colonizing aspects of Canadian prisons back to its very formations, before exploring how intimacy is controlled and weaponized in places like borders and prisons. Prisoner justice and liberation, Jones argues, lies at least in part through connection, relationship-building and intimacy.

The Affirmations by Luke Hathaway
Halifax-based poet Luke Hathaway had a lot to live up to with his newest release, since his last one—Years, Months and Days, published under the name Amanda Jernigan—was on The New York Times’ radar as one of 2018’s best books. This time around, Hathaway delivers the story of “the love that rewired his being” through lyrical poems that lean into the possibilities presented by small-f faith and transformation.

Ducks: Two Years in the Oil Sands by Kate Beaton
New York Times bestselling cartoonist Kate Beaton’s graphic memoir of her time in Alberta’s oil sands has made an international splash, landing the Cape Bretoner on NPR and Vulture. From the book’s opening pages it’s not hard to see why: Beaton delves into how it feels to take a job for the money, the sexism and misogyny she endured, and how the ethical implications of the work were finally un-ignorable.

Fayne: A Novel by Ann-Marie MacDonald
The heft of Fayne (the book clocks in over 700 pages) could’ve been a deterrent to readers. So could MacDonald’s against-the-trend decision to synthesize the mores of Victorian literature in her new book. Instead it became an instant number one bestseller for the Cape Breton author, who you might recall for her Commonwealth Writers Prize-winning debut, Fall On Your Knees. MacDonald needed to tell the story of Fayne so badly she battled debilitating pain to type the epic. It follows the story of a young girl coming of age in 1800s rural Scotland, living in the shadow of her late, beautiful mother while getting a son’s education.

Low Road Forever by Tara Thorne
Former Coast contributor Thorne cemented her reputation as Halifax’s answer to Fran Lebowitz with this collection of essays on everything from solo travel to the work of Tori Amos that navigates the space between tender and sharp-smart with pinpoint precision.

Halifax’s poet laureate begins with a bit of a thought experiment in her newest: The last forest in Nova Scotia has been preserved as a tourist attraction. Here, Sue Goyette splunks the fictional forest’s imagined website—specifically its comment section—to deliver a collection of bite-sized missives and musings that act as their own multi-voiced paean on the importance of nature.

Sue Goyette's new book Monoculture asks us to value the forest before we lose it: Halifax's poet laureate knows we need nature as much as it needs us—and this collection of poems will help you know it, too.

“This book, for me, is my way of going into how can that [idea of] ‘better’ look? Starting that conversation and holding space. So this book offers you the invitation to sit down and consider,” Goyette told The Coast back when the book was first released. “So you're in a forest thinking, just by reading the book, hopefully.”

Painted Worlds: The Art of Maud Lewis, A Critical Perspective by Laurie Dalton
There are a shelf-sagging number of books on Maud Lewis at this point, so what made Dalton’s entry into the conversation necessary? Simple: After years of Lewis’s personal life being the focal point of discussions on the province’s most famed folk artist, Dalton’s coffee-table-worthy book explores the merit and makeup of Lewis’s paintings themselves. “I felt that a lot of the narration and a lot of the storytelling around her centered around…her tiny house; [Lewis] as an example of the rural poor; as an example of Nova Scotia folk,” Dalton told The Coast in an interview this spring. “I felt that it sometimes lacks a deeper understanding of looking at her paintings as objects of art and also situating them within art history—within the language of cultural history.” 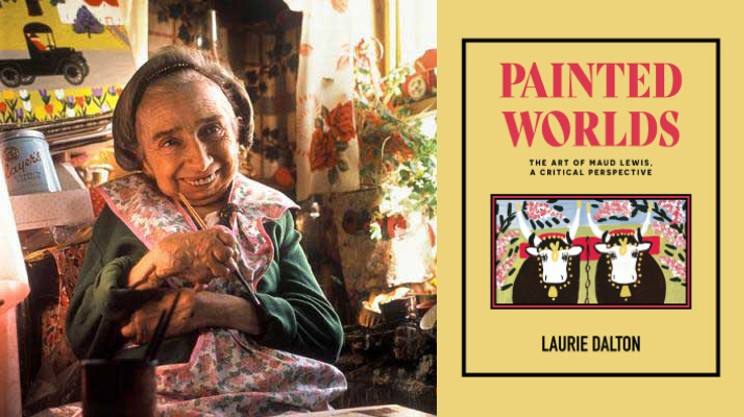 Finally, someone wrote the must-read book on Maud Lewis's artwork: Over 15 titles explore the folk artist's life—but Laurie Dalton's Painted Worlds: The Art of Maud Lewis, A Critical Perspective puts the emphasis back on the paintings.

Painted Worlds sets that record straight, exploring Lewis’s mastery of colour and comparing her use of repeated motifs to the likes of Andy Warhol or Emily Carr.

The Summer Between Us by Andre Fenton
Andre Fenton’s Best of Halifax Readers’ Choice Award-winning YA novel is a stand-alone sequel to his smash-success debut, Worthy of Love. The Summer Between Us follows the amber sunset of adolescence as two teens struggle to balance the expectations of their families with their own dreams. “It's very unapologetic in its own way,” Fenton said of the book in a Coast interview this summer. “It’s kind of a take on the punk rock scene here through the lens of a group of racialized teens who are just trying to make their way through—but also learning to build the confidence to take up space in a scene where they don't always feel welcome.”

Halifax author Andre Fenton's newest novel is the book of the summer: A Q&A with the award-winning writer on why The Summer Between Us should be topping your Goodreads list.

It’s also a fit-for-all-ages luminary of inclusion and representation: Fenton says his works “are the types of books I wish that I had more access to when I was younger. It feels like a responsibility as a writer to fill up that bookshelf of books that you wish you had: An explanation of ideas and issues that you went through.”

Employing her skills as a documentary filmmaker, Hamilton combines reclaimed historical accounts, memories and stories to engage subjects such as intergenerational trauma, racial violence, the silencing of girls and women, and the loss of children," adds the publisher, Gaspereau Press. "Running throughout her work is a yearning for genuine equality and freedom, and a understanding that a better future begins with engaging honestly with our past."

The Volunteers by Lezlie Lowe
Another former Coastie delivered a page-turner in 2022. Lowe’s visceral re-creation of World War Two-era Halifax not only highlights the pivotal role our seaside city played in Canada’s effort against the Nazis, but centres the overlooked, everyday heroes who made it a reality: The mass number of women and girl volunteers who kept the city running during the conflict.

Wonder World by K.R. Byggdin
New voice K.R. Byggdin dropped a novel about a disenchanted queer youth in Halifax during a time when Halifax’s own queer scene was struggling, thanks to a lack of dedicated 2SLGBTQ+ venues. How does one deal with the fallout when their promised land isn’t all it's cracked up to be? Byggdin’s brave protagonist finds out as he reconsiders his relationship with home as he flits between the one that made him and the one he tries choosing.

Where The Silver River Ends by Anna Quon
Quon's novel traces the unfurling life of Joan, a biracial English teacher adrift in Europe after fleeing Budapest for a fresh start. As Joan befriends two strangers in her new city, Quon delivers a deep-dive into biracial identity, systemic oppression and making one's own way in the world.