Capital Health workers trade in their scrubs for blood.

This is not a real doctor or a zombie. He's not even one of the cast, just some undead guy on the internet. 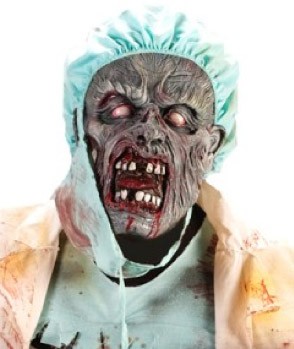 If your doctor has been looking a little undead lately, there’s no need to be alarmed. Might be a mild case of method acting, getting ready for They Came from Eekum Seekum, an original musical put on by Capital District Health Authority staff, family and friends. The small-town lobsterfest turned zombie feast was written and conceived by the bizarro brain of Roy Ellis, Capital Health’s bereavement coordinator. This is Ellis’ second full-out musical production for the health authority—-last year’s sold-out show was a spoof of General Hospital—-and one he’s been preparing for since last year.

In true Guffman community theatre spirit, no one is turned away from the stage, and with 10,000 staff members, Ellis—-a former actor who’s been writing plays since he was a kid—-had to prepare for a large cast: “Thirty-five souls and not all are living,” he laughs. Outside of a few male singers and hired musicians, including members of Gypsophilia, this means that “doctors and dish room workers are equal on the stage,” and new relationships inevitably form: “The process is human building,” Ellis says. The hospital business is a stressful one, which is why the health authority progressively provides the musical with start-up money that will get reimbursed through ticket sales.

As for the tunes, Ellis says think of pseudo-musicals like Moulin Rouge, where new lyrics are put to old melodies, e.g. Donna Summer’s “Hot Stuff” has morphed into “Hot Lobsters.” And of course you can’t have a gang of zombies without a little Thrilleresque dancing. Ellis also brought in choreographer Cynthia Myers to “kick some arse.”

They Came from Eekum Seekum opens tonight and runs until May 8, 7:30pm at Alderney Landing, with a 2pm Saturday matinee ($20, ticketpro.ca). There’s no real gore so it’s pretty family-friendly for those of zombie-coping age.