Charcuterie, the thrifty art of cooking with all parts of beast or fowl, is in vogue. 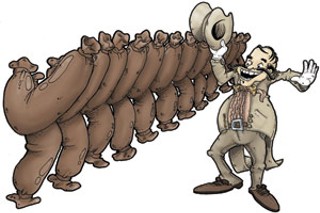 Joel Rousell has a leaping pig tattooed on his forearm. It’s a classy looking pig, discreetly overlaid with a grid of the various pork cuts. The tattoo was inspired by the pig on the cover of Fergus Henderson’s cookbook, Nose to Tail Eating. Henderson is the British chef who reminded the western world to eat the whole animal, not just the pretty parts.

Rousell is the chef at Morris East in Halifax. It’s refreshing to see a local chef so devoted to this culinary philosophy. This culinary philosophy, I should clarify, speaks mainly of charcuterie---a word taken from the term cuiseur de chair, the cooker of meat. This translates roughly three ways: 1. In France, charcuterie is the name of the shop that sells 2. charcuterie, which includes dried salamis, duck, goose or chicken liver patés, terrines, mustards and pickled vegetables. When some, or all of these items are plated, it’s called a 3. charcuterie platter. The French version of antipasto, if you may.

Rousell first fell in love with the stuff while working at Toronto’s Avalon restaurant under chef Chris MacDonald, where offal, sweet breads and charcuterie were a mainstay on the menu. Montreal chefs have been serving it up for, well, forever, but it took a while for the tradition to gain momentum in the rest of the country. However, times are changing. The National Post listed charcuterie as one of the top food trends of 2008. It seems odd, I know, for such an old tradition to suddenly be a trend, but no matter. Like vinyl records and eating locally, it’s back, and it’s about time.

“Halifax diners might take a little longer to catch on,” says Rousell, freshly back from a charcuterie binge in Montreal. “People are afraid of liver, of fat, of game. When you mention it, they think it’s freaky and usually run for the hills.” But it’s the liver, he says, that gives paté its divine texture. You can’t taste it; you wouldn’t even know it’s there. But Rousell doesn’t want to hide his food. When he left Toronto, he opened Ketch Harbour House on the Eastern Shore, where he served a five-course tasting meal. Every meal included a non-negotiable meat plate. Once diners tasted what was on offer, the response was always positive. At Morris East he’s making his own bresaola (air-dried salted beef fillet), fresh sausages, pancetta and patés. In the new year there’ll be a revolving terrine list on the menu. “It’s so easy---the local, organic heritage breeds, like Berkshire pork, are great in Nova Scotia.”

I’m not ready to get a tattoo, but I will dive into the whole animal in 2009. I’ve asked Santa for charcuterie, Michael Ruhlman and chef Brian Polcyn’s cookbook designed to show home cooks how to make everything from bacon to rillettes. In a recent interview (on Toronto food blog, Gremolata.com) Rulman said, “one of the things I liked about learning charcuterie is it taught me so much about the way food worked, how bacteria worked, how salt worked, how protein and fat worked. If more people understood the fundamentals of charcuterie, they’d know how to cook everything; they’d know how to shop better, how to eat better.”

Understanding the fundamentals of anything creates an appreciation for the final product. Appreciation promotes savouring. Savouring slows things down. Slowing down means eating less, and wasting less too. Using the whole animal–--not just out of need but for want–--is economical. Disregarding chicken livers is like tossing out the skin of the apple. Or the stalk of the broccoli. Or the rind of a parmesan. Who said you can’t make a silk purse out of a pig’s ear anyway?