This weekend movers, shakers and beer-makers from across the country are in town for the CBAs’ 16th year. 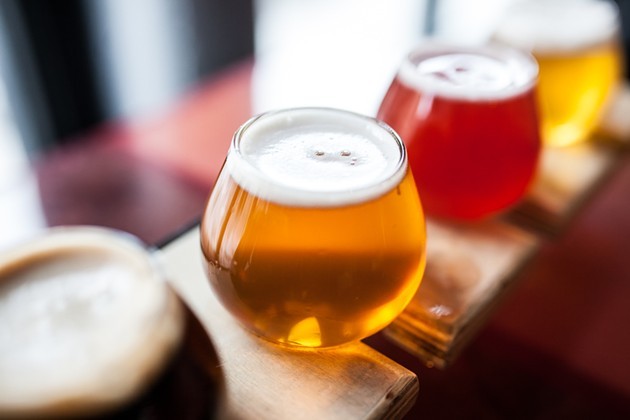 Riley Smith
If you’re wondering why the Canadian Brewing Awards are such a big deal, consider the numbers.

Over six days earlier this year, 48 judges weighed in on 55 categories and nearly 2,000 entries representing every province and territory (save for two) to land on the winners of the 16th annual industry awards. Those 48 folks were Beer Judge Certified Program experts, who blind tasted the entries and stuck to what CBA president Rob Engman calls “a fairly empirical,  scientific method” to assure every entrant the best shot at being judged objectively. The road to handing out this hardware is serious  business.

“The first CBAs we had when we took it over, there were 84 entries and they were primarily from Ontario. It wasn’t truly a national competition,” says Engman, who took on the Canadian Brewing Awards (and Taps magazine) about 14 years ago. “That tells you about the growth.”

The event’s snowballing size has helped it make many changes and developments over the years—2018 marks its first time using an electronic scoring system as well as the inaugural Canadian Cider Awards, which will take place later this summer—and pushed it to take the show on the road. This is the seventh year the conference has been travelling across the country (before 2011 it lived in Toronto, permanently) and its first time in  Halifax.

“The scene is so developed right now I felt proud to show it off and knew that there were plenty of breweries that would pick up the mantle and run with it, too,” says Garrison Brewing’s Brian Titus, who Engman credits as leading the charge to bring the event to town. “When it was first whispered in the ear of Rob, it was about two years ago. Tata Brewing Company was at the CBAs too and we literally started chanting ‘Halifax 2018!’ People laughed and joined in, but we were  serious.”

Flash forward two years and Titus, with the help of many of his Nova Scotia brewing comrades, has helped Halifax earn its spot as city for the event, which will open with a reception serving exclusively beers made  here.
On top of the awards, the CBAs offer a suppliers’ exhibit floor, educational seminars, networking opportunities up the wazoo and a keynote address from Craft Brewers Association of Nova Scotia president (and Boxing Rock boss) Emily Tipton. And Engman says something historic will also go down this weekend: The Halifax Summit.

“What’s happening amongst the craft brewers, they’re realizing that if we are to thrive and continue to grow it has to be at the expense of the foreign-owned guys. The Canadian craft brewing industry doesn’t have a national association, so we’ve organized the summit and invited representatives from every provincial association and guild to come to a meeting and help us launch a national association to represent craft brewing on a federal level,” he says. “It’s the beginning of something that’ll take on a much larger life in the coming years, and hopefully create some change at a federal level.”

That spirit of collaboration seems to be at the core of this celebration of Canada’s independent brewers and that’s something Titus can’t wait to get a taste of. And share a taste of. He says everyone who attends the awards on Saturday will get a can of the CBANS community brew, Made Here By Us, made with Nova Scotia ingredients and a Cape Breton sourced yeast strain.

“Twenty-eight breweries worked together on that,” Titus adds. “It really shows the spirit and craftsmanship coming out of this  province.”