Happy ours: A history of local gay bars

A walk back in time, down the rainbow-brick road. 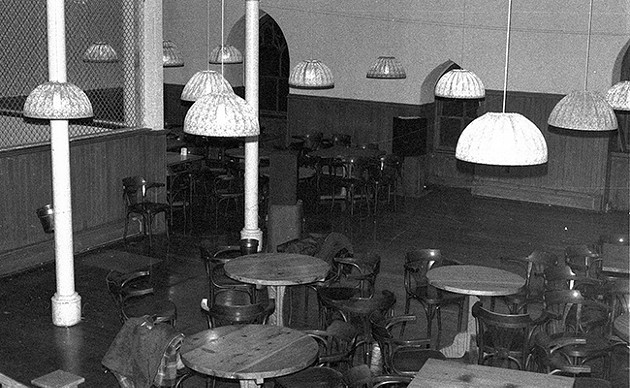 ROBIN METCALFE
A look inside The Turret on a rare quiet night.
Halifax is a city with a vibrant history, and that extends into its queer culture. Since the first gay bar opened in 1971, Halifax’s queer community has found a home in nightlife.

The first “officially gay” gay bar in Halifax was Thee Klub. It opened in 1971 in the Green Lantern Building on Barrington Street. Details about Thee Klub and other historical venues can be found on the gay.hfxns website, where the majority of information in this story was sourced.

Gay bars weren’t always about big nights out—they were also a tool social change. The Gay Alliance for Equality opened and operated The Turret bar on the third floor of the former Khyber building. The money earned at The Turret went to fund the ’s social justice work in the early days of the queer rights movement.

The Turret was succeeded by Rumours, located in what is now the Global Halifax headquarters on Gottingen Street. Rumours closed in when the GAE—renamed the Gay And Lesbian Alliance—went bankrupt.

It was in the ’90s and early 2000s that bars started to cater to specific subcultures in the queer community. The Eagle’s Nest was known as a leather fetish bar, while Reflections catered to a younger crowd. Barrington Street’s Sub Rosa was a short-lived archetypal rave spot.

The face of queer bars has changed a lot over the years, swelling and shrinking in response to changes in the community. The Company House opened in 2009 as a queer establishment run by women, for women. Just down the road is Menz & Mollyz, which along with Reflections is one of two contemporary gay bars in the city.

As the queer community became more accepted in modern society, crowds at gay bars have diversified. The Company House and Menz & Mollyz have become prominent performance venues, and Reflections is still a popular mainstream bar that maintains its roots in queer culture.

Here’s a look at some other historical LGBTQ+ bars and clubs that have called Halifax home.


: The Stockade
Before there were specifically “gay” bars in Halifax, queer people had to rely on after-hours clubs. The Stockade, at 2828 Windsor Street, became known for its DJ nights and drag performances.

1971: Thee Klub
Halifax’s first official gay bar. Thee Klub featured a $1.50 cover, was only open two nights a week. For its grand opening, patrons could get in for 69 cents.

1976-1982: The Turret
The Turret was a bar owned and operated by the Gay Alliance for Equality (later the Gay And Lesbian Alliance) in the former Khyber building at 1588 Barrington Street.

1982-1995: Rumours
Rumours the successor to The Turret. It closed when GALA went bankrupt in 1995. Currently, the building is home to the Global Halifax studio and offices.

1996-present: Reflections Cabaret
Reflections opened in late 1996 by Beverly and Paul Wilson. It is now the oldest gay bar in Halifax still in operation.