Relative Happiness is a sweet low-budget local film about a woman we all know. 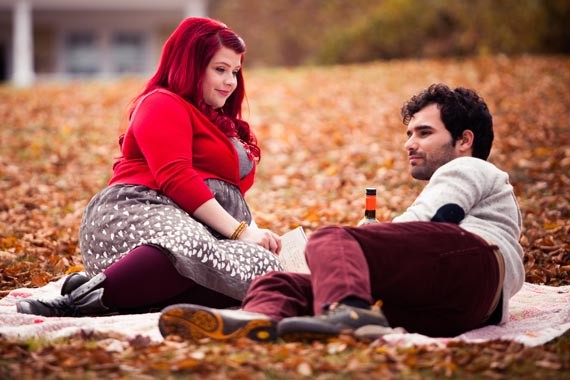 Lexie Ivy is 30, a small-town business owner, fashionable and eccentric, funny and smart. She's also the single, overweight one of a trio of sisters, a redheaded sheep sticking way out amongst a family of fantasy blondes.

"Flawed yet lovable" is how director and co-writer Deanne Foley describes the protagonist of her second feature, Relative Happiness, a 2014 Atlantic Film Festival highlight shot in Halifax and premiering theatrically Friday at Park Lane, with other cities to follow in April. "She feels like an outsider in her own family, but it's all in her mind," says Foley from her home in St. John's. The film opens with Lexie (played by the Australian actor Melissa Bergland) struggling to fit into her bridesmaid's dress, bra out to the world and her oblivious dad; later she struggles, to comedic effect, with a yoga workout and makes a series of fat jokes at her own expense.

But no one in the film, from her parents, sisters to either of the men who show up as potential love interests, ever resorts to name-calling, backhanded compliments or sidemouthed insults at the hero's expense. "This movie is not about making fun of a fat woman—we don't really touch on it in a way, she doesn't have these conversations or we don't see her trying to lose weight," says Foley. "She accepts who she is but at the same time struggles with it, which I think we do as women. Every woman in the audience has struggled with putting on a dress and it not fitting right."

Foley struck gold in the casting of the sharp-but-warm Bergland, who had been in Los Angeles for just two weeks before landing her first film audition, for Relative Happiness. "Initially we did look in Canada—let me say there are so many brilliant actresses in Canada—but she also had to be plus-sized. It wasn't an easy task. Every actress who becomes successful drops 30 pounds," says Foley. "We ended up hooking up with a US casting agent, Nancy Klopper. We had really hard dates—we were shooting in October, and so many US actresses are shooting television at that time. Nancy was like, 'Let's discover someone new,' and I felt like that was really exciting thing to do."

"I loved watching her, she is so smart and together and her instincts are perfect. She's very sure of herself without being arrogant," says Susan Kent, who plays Lexie's best friend Susie, on a break from shooting This Hour Has 22 Minutes. "What you see on the screen is really what she's like in real life. When you don't know someone and the first thing you do is pretend you have this history with each other—we were just cracking each other up. We got along so well. I love when that happens—they yell 'cut' and you're still goofing around."

Relative Happiness is based on Lesley Crewe's 2005 debut novel from Vagrant Press. Crewe adapted her own screenplay, then Sherry White (Orphan Black) took a crack. Years later—the director estimates six in all—Foley and Iain MacLeod, who'd written her first feature, the 2012 boxing drama Beat Down, banged out the shooting script.

"The script is very different from the novel," says Foley, "which is this really beautiful family drama inlaid with comedic moments. Iain and I took the script and turned it into more of a romantic comedy."

The romantic elements appear when into Lexie's life, as her sister's wedding careens ever closer, drops a handsome bohemian named Adrian (Johnathan Sousa). He hugs her on sight, gamely attends family events with her, takes her on nature walks and talks a bunch of free-spirit bullshit ("I related to that living in Newfoundland," says Foley, "you wanna have a whirly kind of guy"). If Adrian floats above it all, closer to earth is the saltier Joss (Aaron Poole), a carpenter fixing the roof of Lexie's bed and breakfast. "His performance is really honest and subtle," says Foley of Poole. "We all know romantic comedies—we know the formula, we know he's the guy she's going to end up with, but I hope the way they do is surprising."

Foley, who lived in Halifax from 1998 until 2002, shot the movie here in just 16 days in the fall of 2013 on a million-dollar budget. There's also a distinctive vibe of her native Newfoundland in the film, thanks to the casting of Kent, Mary Lewis and Joel Thomas Hynes, who plays Kent's boyfriend.

"I think people really get a kick out of casting us opposite each other because it's like Boris and Natasha. I'm like Sweetums from The Muppets—I'm a tall wiener girl and he's feisty, smaller than me," says Kent. "They always put me in heels to get a charge out of the difference in our height. We know each other so well it's easy, there's some kissing and stuff like that, and it's no big deal."

For a low-budget indie Canadian film, Relative Happiness looks terrific, thanks in great part to some crisp photography from Christopher Porter, which captured a lovely east coast autumn. "We had really big scenes, we shot on water, there's a wedding, there's a funeral, there's a big camping scene," says Foley. "It was a big story, it was very ambitious. I've made two features around the same budget, the $1.3-million mark. I don't even want more money, I would just love to have 25 shooting days. There was no money for overtime. It was shot in a way like a television show, which I learned directing second unit on Republic of Doyle. Four takes is self-indulgent. We all knew we were against the clock in a way. But it was an A-list crew, and there is absolutely no way I would've made the film if it weren't for that crew."

While the CGI-laden fantasies Cinderella and Insurgent dominate the multiplexes this week, a little Canadian movie offers up something special: a woman we all know. "We're all tired of seeing size-two women in lead roles," says Foley. "Melissa was so delighted to be given a real role—Lexie Ivy feels like she could be my friend."

Rachel Getting Married (2008): Jonathan Demme's searing family drama stars Anne Hathaway as a selfish recovering drug addict, Debra Winger as the mom she has a complicated relationship with, and Rosemarie DeWitt as her sister who wants to get married in peace.

Bridesmaids (2011): Remove the raunchy elements and you've got the friendship between Kristen Wiig and Maya Rudolph, reminiscent of Lexie and Susie. Wiig's also got a pair of disparate love interests, Jon Hamm and Chris O'Dowd.