Street trees save us millions of dollars. 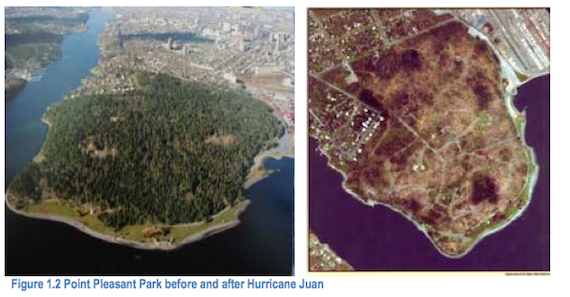 While the benefits of street trees are obvious---shade from the hot sun, or a perch for chattering starlings---the most dramatic benefits are not so obvious. According to the city’s urban forest master plan, each year, the urban forest saves $2.1 million reducing stormwater run-off, $9.6 million mitigating air pollution and $12.4 million reducing energy costs by shading buildings. Trees are the only form of city infrastructure that actually increases in value over time. Yet, as many of our beautiful centenarian elms and maples become geriatric, it’s time to give thought to keeping them alive, and preparing for their demise. There is also space to add 90,000 street trees.

While about 15 Canadian cities have urban forest plans, some for decades, Halifax only got around to talking about a plan in 2001. Even then, political will lacked---until Hurricane Juan struck. When Point Pleasant Park became a graveyard, skeletons of white pines jutting into the sky, Haligonians began to realize that we could lose something we took for granted. In the concrete jungle, healthy trees don’t simply grow themselves.

In 2006, the planning process began in earnest. The city worked with Peter Duinker at Dalhousie University to lead a research team to determine the city’s needs and help develop the Urban Forest Master Plan. But it wasn’t until 2012 that the plan was adopted by council.

The UFMP is arguably the most comprehensive urban forest plan in Canada, identifying 110 unique neighborhoods, including their historical context and ecological and social needs. With provisions for adaptive management and monitoring, it is the only urban forest plan to adopt the Canadian Standards Association’s national standards for sustainability.

The plan launched last spring with plantings in five neighbourhoods, and since mid-January, some streets have been briefly closed by pruning trucks. Unlike past years, this isn’t a reaction to a storm or complaints. It is the start of HRM’s first ever preventative pruning program, intended to keep our mature trees healthy for as long as possible.

Like any work funded by tax dollars, the UFMP has its critics. With economic pressure to reduce HRM’s budget, it’s hard to know what the fate of the plan will be, particularly since it is still in the pilot stage. Initiatives like this, with value expressed in long-term savings rather than short-term revenue, are often first on the chopping block. But Halifax can’t afford to continue with the status quo: simply reacting tree-by-tree to the last storm or disease outbreak, while the rest of the urban forest ages and dies.

“Trees are our unheralded allies,” says Duinker. “They affect us all so deeply and positively in ways we don’t even realize. They deserve our attention, and our care”.