Council agrees the advice it was given 15 months and half a million dollars ago was correct after all. 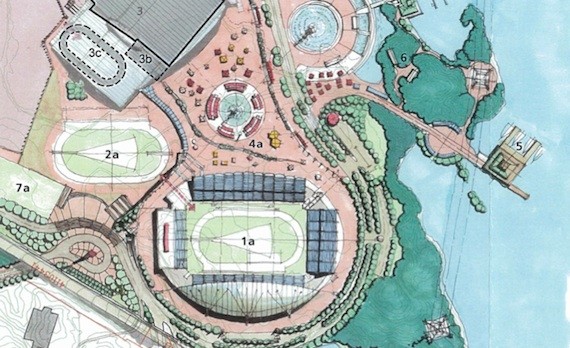 This is the stadium that was proposed for Halifax's Commonwealth Games bid-- also at Shannon Park.

On December 7, 2010, Grant MacDonald, addressed the Halifax city council. MacDonald is the director of Major Events & Community Partnerships at Trade Centre Limited, the provincial crown corporation that has expertise in major sporting and concert events, and council had asked MacDonald to research the possibility of the city bidding on the opportunity to become one of the Canadian Soccer Association’s host cities of the 2015 FIFA women’s world cup. In order to successfully win the bid, the city would need to commit to building a stadium.

MacDonald, the public official in Nova Scotia with the most knowledge and expertise with hosting sporting events, had one piece of advice: Don’t do it. “Based on timing constraints, Halifax [should] notify CSA that it will not continue as a Candidate Bid City,” reads MacDonald’s report to council. “Timelines do not allow for proper due diligence on venue feasibility, public input or funding partnerships.”

Council, however, rejected that expert advice, and voted to chase the bid, and the stadium. It would go on to form a committee to research the possibility of a stadium, and keep anyone who at all questioned a stadium off the committee. It would spend $93,000 for a stadium study, then $275,000 for a second stadium study. It would authorize $100,000 worth of staff time for chasing the stadium. And now, 15 months and nearly half a million dollars later, council voted Tuesday 22-1 that, yep, sure enough, just as MacDonald had predicted, a stadium is too iffy of a project at this time, and there’s no chance of any funding partnerships for the FIFA bid. The stadium dream is dead.

There’s a polite fiction that the stadium studies can be brushed off and used for some future stadium that will one day magically appear at Shannon Park, but at least one councillor called bullshit on that notion. “That’s just a fig leaf used to justify the expense of the studies,” said councillor Jackie Barkhouse Tuesday.