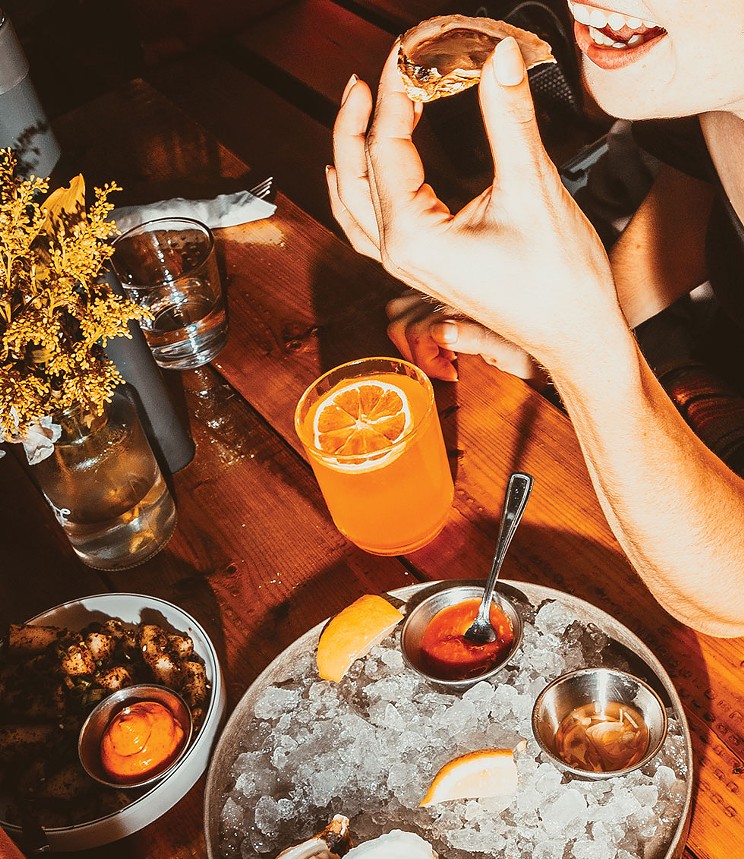 25 restaurants, bars and cafes that opened or refreshed in the last year.

With vaccine optimism high and COVID case counts low, it’s time to think outside the takeout box. To whet your appetite for dining with strangers, here’s a selection of 25 restaurants, bars and cafes that opened or refreshed in the last year.

Dear Friend - In downtown Dartmouth, the illustrious cocktail garden at Dear Friend awaits you and your crew. With a choice between two cocktails on tap and many more shaken or stirred, plus nibbles from fried pepperoni to fresh oysters (pictured above), this enclosed patio with vintage vibes is a great place to celebrate happy hour in style. 67 Portland Street

Sapori Italian Street Food - The Queen's Marque luxe apartment building isn't quite finished, but this Italian market and casual eatery is already up and running, offering pizza, pasta and more. When Sapori first opened back in April, owner Beppe Giardino told The Coast "in the big piazza basically, our food, you can grab it and walk around like you would in Europe." 1741 Lower Water Street 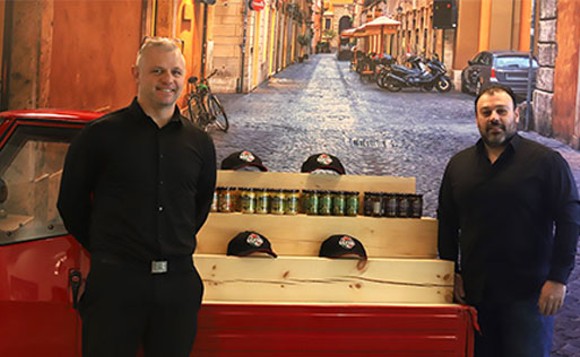 Jekyll & Hyde - A bar that's as mysterious as its namesake, this north end spot first opened in March, and its small front patio is great for people-watching in the Hydrostone while you snack on wings and nachos, or slurp a bowl of noodles. 3061 Gottingen Street

Holy Moly Bubble Tea - Dartmouth dwellers have even more options for boba since this spot opened in February. Grab an iced tea or milk tea for your walk through the Dartmouth Common, and pick up some Pocky and other imported snacks while you're there. 114 Woodlawn Road

7 Peppers Grill The longtime Quinpool falafel favourite has moved up the road because of impending development at its old location. Owner Hekmat Ani told The Coast in January that "We are in so [much] stress right now to open with COVID, but hopefully our customers don't leave us." 6169 Quinpool Road

Vines Fusion & Grill - Not to be confused with The Vines, also in Dartmouth, this "East meets West" fusion spot pairs Italian and Indian food for dishes like artichoke lobster masala dip, and both pasta and biryani for whatever your mood is that day. 73 Alderney Drive

The Osney - This cute cafe brings north enders their morning latte and afternoon sandwich, with pastries often baked in-house and breads, meats and more coming from other local vendors and farmers. 5783 Charles Street

Bedford Neighbourhood Pub - Who said you have to go downtown for great pub food? This Bedford Highway bar will serve the chicken sandwich of your dreams while you listen to live music on Saturday nights, or bask in the sun on it's newly expanded patio. 1658 Bedford Highway

Black Sheep - Moving from Dresden Row to the Brewery Market means Black Sheep has almost three times the space and a new rooftop patio, something that's especially important during COVID times. The renovation took six months, said co-owner John House when it opened in February of this year. "The kitchen we literally tore it back to the original brick from 1860." 1496 Lower Water Street 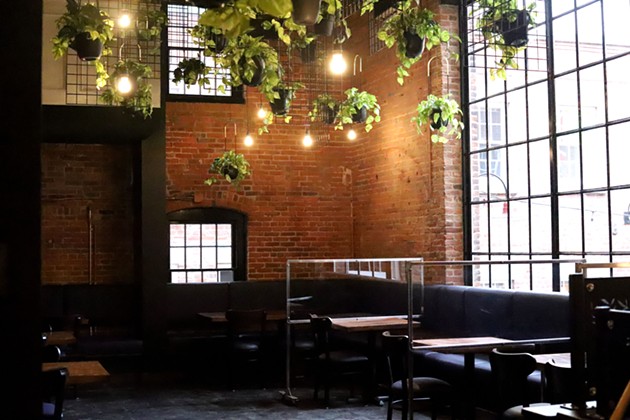 the coast
The re-design changed a lot of things, but kept the exposed brick from the 1800s.

Chicking - A wide variety of Korean fried chicken and chicken burgers that will have you craving more, Chicking first opened its doors in October and since then has gained a loyal following of fried-food fanatics. 604 Bedford Highway

Peace by Chocolate - The Hadhad family's latest storefront is a must visit for both tourists and Haligonians spending a day on the waterfront. The shop, with its aquamarine stone-lined archways and marble countertops, opened in March in the Queen's Marque building, selling artisan chocolates and small-batch sweets. 1741 Lower Water Street

Hungry Bowl - This smoothie-centred spot opened in late June near the Halifax Common. The packed rice bowls, fruit-filled smoothie bowls and coffee and baked goods are perfect for bringing to a picnic lunch. 5689 Cunard Street

Los Toros - This authentic Spanish spot opened its doors in January where Stayner's Wharf Pub used to be, and the patio near the ferry terminal made its debut this spring. It's a great spot to sip wine from Almansa or Rias Baixas, and enjoy seafood tapas while watching the ships come in. 5057 George Street

Sidekick Cafe - A new north end cafe that opened in January, Sidekick is a go-to for morning coffee or afternoon drinks, as well as fresh bread and treats from Boulangerie la Vendéenne, with a sweet little patio to enjoy them on. 2851 Agricola Street

TAPestry Beer Bar - Lower Sackville got a beer bar in mid-June when TAPestry came to town, offering local ales, cider and even wine. The brand-new spot has up to 20 taps to cater to any style of brew you want to try this summer. 833 Sackville Drive

The Maxwell's Plum - The classic downtown watering hole reopened in June under new ownership. If you're looking for pre-pandemic Halifax nostalgia with a new menu and renovated interior, The Plum is waiting for you. 1600 Grafton Street

EDNA Restaurant - The Gottingen Street brunch spot is back from a COVID hiatus that lasted over 12 months. Four staff have taken over the popular restaurant, and with EDNA now taking reservations, it's even easier to snag a spot inside the cozy dining room. "We have had incredible support," co-owner Heather Townsend told The Coast in June. 2053 Gottingen Street 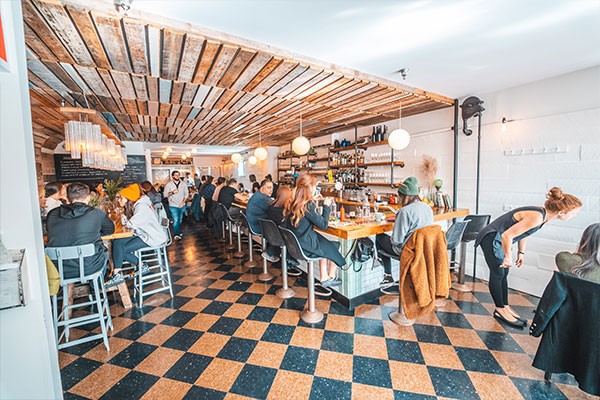 Daniel Dominic
What a typical Sunday morning brunch at EDNA looked like in the before times.

Trattoria de Claudio - An authentic Italian restaurant that opened in March, chef Claudio Pontorno serves lunch, dinner and—perhaps most importantly—during that in-between "aperitivo" period when you really just want an Aperol spritz in your hand as you relax under a patio umbrella. 1569 Dresden Row

Serpent Brewing - With a beer garden aptly named "Eden," this new Spryfield oasis serves up sinfully delicious brews made on site. Carry in your own food—there are restaurants nearby—and eat it to eat under the patio lights. 16 Dentith Road

Hermitage Halifax - A relaxing spot on the waterfront, Hermitage opened its doors last October. With an on-site sommelier and elevated menu, it's a perfect place to escape the city without having to actually leave town. 1460 Lower Water Street

Famous Curry Garden - Authentic Indian food can be found at this former ramen spot. Since opening in April, it's expanded to the back patio, a colourfully decorated spot to try the tandoori chicken or share some crispy samosas with your pandemic-bubble buds. 5687 Charles Street

Masala Delight - Masala Delight is not just a food truck anymore, but also opened a permanent restaurant on Inglis Street in April. Owner and operator Libu Babu told The Coast at the time that "the menu is small right now, but we are planning to expand it." 5361 Inglis Street THE COAST
Masala Delight's masala dosa is best for eating in, says Babu, as it gets soggy during transport.

Tipico Pasta Restaurant - From bolognese to shrimp linguine, this new north end Italian restaurant will satisfy your need for carby, cheesy goodness. Grab a table on their plant-lined front patio and sip a glass of wine as the sun sets and the twinkle lights turn on. 3450 Dutch Village Road