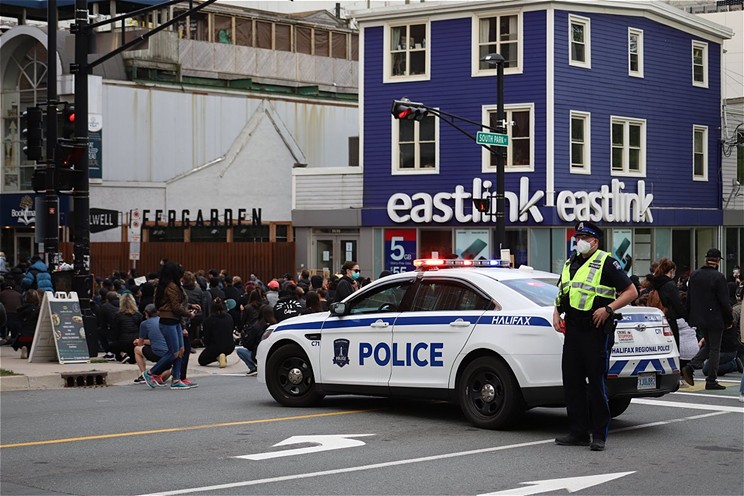 Victoria Walton
The committee for defining defunding doesn’t have the power to direct the board to make changes.

Defining defunding police committee gets important approval from police board

With approval from the board it can finally get to work.

Halifax’s Board of Police Commissioners gave another green light to the committee that’s tasked with figuring out what people in Halifax think “defunding” the police should mean. After first deciding it needed an external committee to develop a definition for defunding the police in August, the board’s been slow to let it start working, but now things should start rolling.

The defunding definition committee, chaired by professor and poet El Jones, provided its terms of reference and scope at Monday’s BoPC meeting.

The terms of reference reads: “Following the death of George Floyd on May 25th, 2020 in Minneapolis, a global movement calling for rethinking and reconstituting police and their role in public safety, resulted in protests and demonstrations with a rallying cry to defund police. In Halifax, the Board of Police Commissioners (BoPC) sought to define defunding and on September 21st, 2020 voted to commission El Jones, poet, professor and activist, to develop a proposal and recruit a committee to recommend a definition that the BoPC could consider.”

Commissioners made sure to state that this report would be considered by the board of police commissioners, but the report alone does not have the power to direct the board to make changes.

The committee will review research relevant to policing, board policy, municipal precedents and current literature, and most importantly, engage with the public through its own diverse membership, likely virtual public hearings and a community survey that Jones wants to ensure reaches a wide range of perspectives and opinions.

This committee and its forthcoming report is just one of a few moving pieces that came out of a summer of activism from people living in Halifax demanding more accountability from police.

Also at Monday’s BoPC meeting CAO Jacques Dube told the board that he’s holding back on kicking off the work that will come out of Waye Mason’s motion from the summer. That motion asked staff to come back with a plan for a review of enforcement delivery and role of police agencies in HRM, suggesting the review could "examine the potential for shifting or creating programs for civilian delivery of non-core police functions." Dube says some things related to that work are under way in the background, but the work of the defunding definition committee will happen first.

The defunding definition committee’s work has already been delayed in large part due to confusion and miscommunication between the board and its chair and legal counsel last fall, but this approval means Jones can finally get things rolling and start engaging with the community.

Who actually has authority to then make real changes based on the results of the report has been debated within the board itself and among regional council. Authority to change policing in Halifax appears to rely heavily on interpretation of the rules. Council and the board was told in 2019 that HRM had no jurisdiction to stop the purchase of an Armoured Rescue Vehicle. But when worldwide protests against police brutality broke out, the purchase was retroactively cancelled. Which is to say, anything is possible if enough people are moved to speak out.