Halifax's Board of Police Commissioners dips a pinky toe into the defund the police discussion | City | Halifax, Nova Scotia | THE COAST 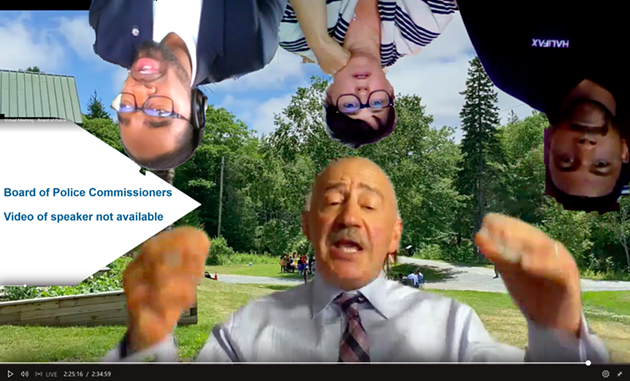 Caora McKenna
Today's Board of Police Commissioners meeting got a little wild.

Halifax’s Board of Police Commissioners got as far as discussing that it wasn’t quite ready to discuss the idea of defunding the police at its first meeting since the death of George Floyd sparked criticism of the way police operate in our communities worldwide.

Technical difficulties preceded the meeting that barely made it through the first of 13 agenda items.

Bookended by a presentation from HRM’s public safety officer Amy Siciliano and manager of the Youth Advocate Program DeRico Symonds was a motion intent on setting a definition for the Board of what defunding the police means.

Defining key policy terms is a common first step for moving things forward, but if we learned anything in the affordable housing debates, managing the expectation of people’s preconceived definitions and settling on something everyone is happy with is a mammoth task–up there with the proper way to load a dishwasher.

The motion, written by city staff in the clerk’s office and shown on the agenda the day before the meeting, proposed:

That the Halifax Board of Police Commissioners adopt a definition of defunding the police that supports a role for policing in HRM that includes:
•    Police performing policing functions
•    Appropriate resources to perform non-police functions
•    Investment in resources that have been proven to support community risks and promote crime prevention.

Many spoke out to criticize the motion, saying it missed the mark.

Tari Ajadi, a member of the Nova Scotia Policing Policy Working Group—a consortium of folks who work towards shifting and changing police and criminal justice policy with the end goal of abolition—says that the language is vague: “Police performing policing functions is circular, it doesn't tell me anything about what the police can and cannot do.”

“The second thing,” says Ajadi “is it doesn't actually address what we talked about when we're talking about defunding the police.” Like decriminalizing of unnecessary and harmful laws and bylaws that criminalize Black, Indigenous and poor people, redirecting funds from police things that actually provide community safety.

The commissioners agreed that this definition wasn’t right, but a process for figuring out which definition to use could prove elusive.

Commissioner Carole McDougall put forward a new motion: that the board appoint a community advisory committee to provide a definition of defunding the police, keeping the previous points from staff’s motion for the sake of discussion.

The subject—as well as all the other agenda items—will be discussed at the next meeting on May 20.

Commissioner McDougall took a moment at the beginning of the meeting to highlight all of the correspondence the board has received. She listed seven pieces of correspondence about de-escalation, 10 in support of body cameras, one against body cameras, five asking for a better system when it comes to the police investigating the police, 26 pieces of correspondences about the ARV (which council reversed the purchase of in its final budget talk last month), six about demilitarization of the police, 20 about defunding the police, nine asking to keep the initially suggested cuts to the police budget (didn’t happen), seven more talked about training, 23 asked that funds be directed to community supports like housing and mental health, one on a gun trade-in programs, 15 for an anti-racist strategy that reimagines public safety and more that asked for an African Nova Scotian justice institute and one about an African Nova Scotian policing strategy.

“We're supposed to be reflecting the needs and values of our communities, and it was clear in those letters,” said McDougall. “It’s really important for us to pay attention.”

Commissioner McDougall's motion—if it passes at the next meeting—would move towards getting community input on the definition of defunding the police, but Ajadi says that he and the policing policy working group have been asking to present at the meetings to contribute to the discussions and calling for public hearings on the issue to no avail.

"There's a whole host of ways that they could do what they're claiming that they want to do," says Ajadi talking about getting community input, "without going the whole route of setting up a new committee with a new terms of reference and everything else."

In their presentation, Siciliano and Symonds talked about defunding the police as an act of reimagining public safety, reallocating resources and focusing on prevention.

Siciliano says that a common theme in the Canada-wide reports that look at policing, from the 1996 Royal Commission on Aboriginal People to the National Inquiry into Missing and Murdered Indigenous Women and Girls, is that “most who come in contact with the criminal justice system are marginalized or vulnerable. That the criminal justice system as a whole disproportionately harms Indigenous and Black communities and those experiencing mental health issues—and that the system is not equipped to support vulnerable people (nor should it be.)

The board did not hear from Halifax’s Police Chief Dan Kinsella or RCMP superintendent Janis Gray on the issue at today's meeting.

The whole thing was notably peculiar, with a peculiar motion whose origins couldn’t be tracked further than “the clerk’s office,” peculiar technical difficulties and (to be generous) peculiar behaviour from commissioners.

Overall, not a promising indication of what defunding the police in Halifax will look like going forward.