Are shrinking art spaces contributing to a cultural void in Halifax, or does necessity breed invention from the city’s most creative? 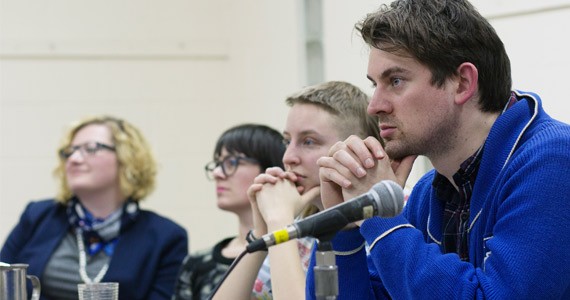 Alyson Hardwick
The “Art Evicted?” community roundtable proved the resilience and good will of the art community.

"Now that the Khyber's closed I don't know where my next show will be. I had a show scheduled there but now I have to find another space. I'm having trouble with that," said multimedia artist Jesse Mitchell. When The Coast interviewed Mitchell earlier this year, he was struggling after the sudden closure of what is arguably the city's most prominent community art space.

Community art spaces on the peninsula have been dropping like flies. Some think the city is apathetic to the cultural cause. There are concerns that cutbacks and rising rents are contributing to the end of community art spaces. This situation raises an alarming question: Is there no room for art?

In December, Eyelevel Gallery moved from a storefront space on Gottingen Street to a small office space on Cornwallis Street. The not-for-profit artist-run centre seemed to be shrinking in a worrisome way.

In January, The Khyber Centre for the Arts was evicted from its heritage home on Barrington Street. The city said ongoing construction next door was potentially disrupting some nasty asbestos in the walls of the 125-year-old building.

In February, Roberts Street Social Centre disbanded after leaving its temporary residence on Creighton Street. The volunteer-run collective searched in vain for an affordable space to house their parent project. Anchor Archive Zine Library and The People's Photocopier found a comfortable home at the back of Plan B Merchants' Co-op but other projects, like Ink Storm Screenprinting Collective Studio, are in storage while volunteers continue to hunt for space.

Last week, Seeds Gallery closed. The not-for-profit gallery and shop was the only space on the NSCAD campus dedicated to showcasing and selling student and alumni work. Operating at a loss, the gallery became an unsustainable drain. NSCAD's board of governors decided to shut the space.

At first glance the landscape looks grim, but as with art itself, sometimes things are not what they seem. When you look closely, or change perspective, entirely new aspects come into the light.

"I'm cautiously optimistic for the future," says Max Haiven, NSCAD professor and organizer of the recent "Art Evicted?" community roundtable. Haiven invited representatives from the creative community to speak about Halifax's changing art scene. Approximately 90 students, professionals, activists and media-makers crowded into a room at Bloomfield Centre to listen and respond to panelists. Haiven organized the roundtable to foster a frank and honest discussion about the problems facing community art spaces in Halifax. "Rising property prices, gentrification and a certain level of apathy and lack of support from all three levels of government are really putting a lot of pressure on these sorts of initiatives," he explains.

It's not all socioeconomic doom and gloom. Haiven wanted the discussion to be optimistic. Haiven says, "one of the goals of this roundtable is to talk about some of the exciting and bold new initiatives and also dream, together, of proactive grassroots ways to change the situation."

The artists who run Eyelevel have long considered a move away from a traditional gallery space–rising rent was simply a catalyst for change. Belcher has successfully made the shift to a "nomadic" model, and says, "without the constraints of a single gallery space, the creative potential for our program is blown wide open."

As a nomadic gallery, Eyelevel isn't limited to traditional exhibitions. Eyelevel has hosted performance series in outdoor spaces, screened videos in unexpected locales and partnered with other organizations to present Art Boat, a creative boat-building project on the Halifax waterfront.

From Eyelevel's small office in the north end, Belcher hopes to offer more than she could through a traditional gallery. Belcher says, "we hope to activate more locations for art in this city, focusing on programming and audience rather than on space."

While the nomadic model is working wonders for Eyelevel, brick and mortar is still on the minds of other art custodians.

Daniel Joyce, artistic director for the Khyber, met with councillor Waye Mason and mayor Mike Savage on Thursday, March 6 to discuss the future of the iconic Barrington Street location. Joyce says the meeting went well and both men seem dedicated to renovating the building and preserving the institution–but don't lower your paintbrushes and picket signs just yet.

The community should continue to pressure the city because there is no official deal. "The fight's not over for the building," says Joyce. "We still don't have anything in writing and that's what we really need–although things are going in that direction. It's still up to the cultural community to assist the Khyber Society to make sure the building will continue to be and to suit community purposes."

In the meantime, Joyce is looking for an interim home on the Halifax peninsula: "We're looking at spaces but I don't want to say where just yet."

The Khyber is not the only arts organization seeking space. Anna Leonowens exhibitions coordinator Melanie Colosimo had a frustrating journey trying to find an affordable space for a new project called Platform Halifax, a branch of Platform Stockholm, an arts organization based in Sweden. Colosimo plans to employ the Stockholm model to create a more sustainable space for artistic production. With shared studio, gallery and event space, Platform may be a solution to a variety of problems; it's a for-profit business but part of the profits are slated to go back into the organization. Platform won't be on the Halifax peninsula–the space will likely find a home on the Dartmouth waterfront. Colosimo says, "since we couldn't find anything in Halifax we went to Dartmouth and we found something almost immediately."

Emily Davidson, a Roberts Street representative, spent the last two years searching for new digs and came up empty–she says Halifax rent is erroneously inflated. Davidson explains, "there are plenty of spaces available that stay on the market for long periods of time but landlords and property companies seem to prefer to keep prices high and spaces vacant instead of lowering rent to what the market can actually bear."

Davidson cites gentrification and says the city and developers trade on the cultural capital artists produce, then leave artists out of the deal. Artists are the foot soldiers and casualties of the same cycle. Creative types establish themselves in neglected urban areas, invest in the neighbourhood, encourage popularity, and soon find themselves priced-out by developers with business on the brain and dollar signs in their sights.

Davidson envisions a solution that affects developers but places the onus on the shoulders of the city. "HRM should enact a penalty so developers, landlords and property companies would have more incentive to reduce commercial rental prices."

Colosimo says artists need to stop the cycle of gentrification by working with developers. "The challenge is that there is not enough municipal or government money to support the arts," says Colosimo, "so we need to look beyond and find new partners."

Partnership and financial support can make or break community art spaces. A sustainable nomadic model like Eyelevel could put more funding to good use and many traditional spaces need more money or less costs just to survive.

A tall glass of hope for the future arrived in the form of Will Perkins, a volunteer with Imagine Bloomfield. Perkins announced that Bloomfield will be redeveloped with housing, studio, gallery, retail and event spaces tailored for low-income artists and community members. Perkins says, "the Bloomfield project is finally happening even though it's been delayed many, many times."

Haiven remains concerned but positive about the future. Haiven says, "these spaces have been surviving with extremely little support for many years, so there is a great deal of resilience and good will, which I think is actually really quite special."