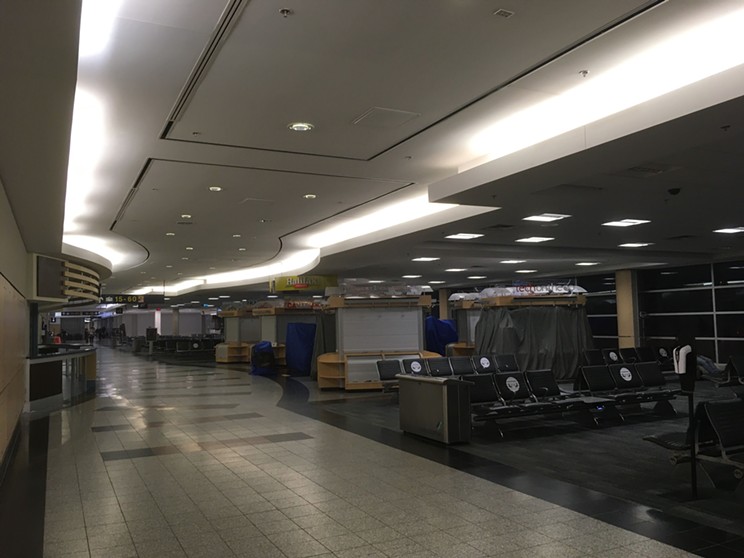 The Coast
US flights are allowed to land at Halifax Stanfield, but the airport is still only operating at about 30 percent capacity compared to pre-pandemic numbers.

Flights from the US have been allowed into Halifax Stanfield since August 9.

Correction: When first published, the story said 70 percent of airport concessions are open, but in fact 70 percent are still closed. The text was changed to reflect that on August 25.

Two weeks ago today—on Monday, August 9—Halifax Stanfield International Airport reopened to receiving international flights, thanks to the federal government’s change in regulations that now allow fully vaccinated Americans to enter Canada. But despite getting the OK to land, no US flights—even those from popular destinations like Newark and Boston—have landed yet.

“There have been zero. The airlines require a little bit of time to get their schedules in place, get their staff back, and sell tickets for these flights,” says Leah Batstone, communications representative for the Halifax International Airport Authority. “So although the rules changed, the airlines would typically need a couple of weeks just to be able to get themselves ready for the change.”

Weddings and waiting in Nova Scotia's marriage biz: COVID messed with wedding travel, parties and even kissing, but people are ready to say “I do” again.

Airport traffic is on the rise in terms of domestic flights. “It's kind of an exciting time, because we're starting to see an increase in the activity there after having basically no activity for the past 16 months,” Batstone says.

The airport is still at only approximately 30 percent of its full operational capacity, although that's way up from the low point of the pandemic, when the airport was running at just two percent of capacity. About 70 percent of concessions and amenities at the airport have not reopened yet.

“We are connected to 16 different destinations at this time, but that's down from about 46 pre-pandemic, so you can see the contrast there,” Batstone says. “And then as well, we're at about 60 flights a day, that's arriving and departing and that's all to domestic locations. But pre-pandemic, we had about 200 flights a day.”

The August 9 change technically only allowed only US flights to fly to Halifax with fully vaccinated passengers. Halifax Stanfield will open to fully vaccinated people from the rest of the world when federal regulations change again on September 7.

“I think it's to give some spacing between [changes],” Batstone explains. “To get used to the increase in travellers and some of the new measures that are being put in place to screen these travellers when they're coming.” Those changes are still being worked out by the Canadian Border Services Agency, which Batstone says is in charge of who’s getting tested on entry into the country.

The first scheduled international flights will be between Halifax and Frankfurt, Germany via Condor Airlines on September 9. “It will be an eight-week fall service between Halifax and Frankfurt, and it'll be flying two times a week,” Batstone says. “There's a lot of longstanding connections between Germany and Nova Scotia, there's a lot of German property owners and family members, who we're hoping are excited to come back to Nova Scotia.”

Snowbirds in the Maritimes will also likely be able to head south to Florida and the Caribbean this winter.

“When looking at US flights, we're mostly seeing service to Florida because it's leading into the time of year where people are going to start heading down south,” says Batstone. “So there's a couple airlines bringing service back to Florida on October 31st but really, it's November and December.”

Service to cities like New York and Boston will also start up around the same time, Batstone says. Many airlines are looking at not just COVID regulations but also demand when deciding to return to a location. And Batstone says the Hallifax airport is “nowhere near” the 4.2 million passengers a year it saw in 2019.

“Having people travelling and feeling comfortable travelling and going ahead and booking flights is really helpful for us,” she says. “Because it shows that there's an interest in it and it just helps the airlines have some confidence that they're ready to bring the services back.”

While testing requirements for international travellers landing in Halifax are still being worked out by the feds, Batstone seems hopeful for the rebound of air travel in the coming months, something that at this time last year seemed as likely as pigs flying. “We're definitely in a better position now than we have been at any other point during the pandemic. However, it's still far from where we were before.”

What to do in Five Islands, Nova Scotia

What to do on Nova Scotia’s south shore

What to do in Ingonish, Cape Breton