Shopping and seeing the sites in downtown Halifax. 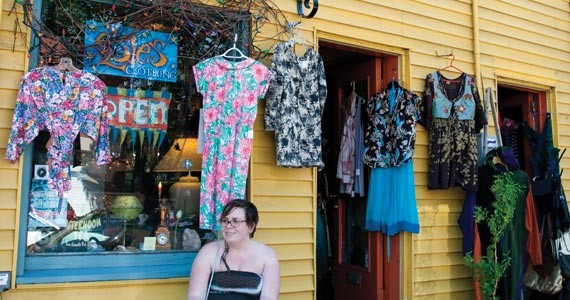 Start on Halifax's biggest shopping street, Spring Garden Road. At the corner of Dresden Row, Jennifer's of Nova Scotia, you can find your salt water taffy, your tartan and your Nova Scotia crafts and whatnots. Across the street is Life Salon Spa (5520 Spring Garden Road), if you're feeling it's time for a mani or pedi. A little further down on the right is Mills (5486 Spring Garden Road), a good spot for cosmetics and accessories, with a number of independent fashion boutiques upstairs. If you're hungry there's plenty to eat on Spring Garden too, with no bad choices to be made.

The next intersection is Queen Street, where turning left you'll find a collection of great indie fashion boutiques, including The Clothes Horse (1530 Queen Street upstairs), Encore (1528 Queen Street) Elsie's Used Clothing (1530 Queen Street) and Put Me On Consignment (1532 Queen Street). Head across the street at Port of Wines (5431 Doyle Street) to pick up some Nova Scotian wines and ice wines.

Wander down to the bottom of Spring Garden to St. Mary's Basilica (1508 Barrington Street), the Catholic cathedral with spires and facades made entirely from granite, and boasting the tallest granite spire in North America. They say the building took 79 years from the beginning of construction to being consecrated just before the turn of the 20th century. Across the street is the towering Aliant Building, a cement monstrosity, but it does have glass elevators. Take one up to the passport office on the 15th floor and check out the view.

If you head down a block on Prince Street toward the water, at the corner of Hollis is the Halifax main branch of Scotiabank. Architect John M. Lyle designed the building, which opened in August 1931. It's worth going in for a look at the main room, with it's gorgeous decorative ceiling and fixtures.

Walk north from there and half-a-block up to Granville Street, and you'll pass Thumpers (1813 Granville), one of the city's premiere hair salons, and arrive at the home of the Nova Scotia College of Art and Design. There's a student watering hole, The Split Crow (1855 Granville Street) and Anna Leonowens Gallery (1891 Granville Street), named after NSCAD founder and famed heroine of film and musical theatre productions The King and I, where NSCAD students and faculty show work.

You'll notice a raised pedway a little further north. That'll take you to the Casino Nova Scotia (casinonovascotia.com), if you'd like to wager a few quatloos or check out some music in the Schooner Room. But if you'd like to see some authentic Nova Scotian homes, it's only 15 minutes to walk from Granville, up Duke Street, turn right at Brunswick and left at Portland Place and up to Gottingen. Then keep walking up the hill on Falkland to see some cool classic and modern houses at the corners of Creighton and then Maynard Streets.