COURTESY IT’S MORE THAN BUSES
As opposed to the colour-crazy map Halifax Transit stands behind, this snippet from It’s More Than Buses’ proposal shows what an elegantly composed bus system could look like. High-frequency routes leading to and from major transfer points keeps it simple.

A good transit map is identifiable, elegant. It's why you can probably picture Montreal's or London's in your head, but still not know which of Halifax's buses go over the bridge. The map's not the real problem, though. Halifax's cobbled-together transit system is hostile and unusable. The city, and the public, want to dismantle the cacophony of routes polluting HRM and introduce a high-frequency transfer-based system instead. Halifax Transit has one chance not to fuck this up.

Back in January, when then-Metro Transit began the overall system review that's currently underway, the goal was firm: Build a simpler, more reliable service and give transit the increased priority in HRM's transportation network that it deservedly needs. Transit in Halifax hasn't been reviewed since the '90s. To blow that all up and start fresh is an exciting prospect, and why it was disheartening to hear Transit announce last week the review was delayed, and being scaled back. A transfer-based system, they say, can't work across the entire network.

Sean Gillis hopes the transit authority isn't getting cold feet. His advocacy group, It's More Than Buses, believes Haligonians would happily trade a greater trip length for increased frequency. "Right now, more than 40 percent are already transferring within this network that wasn't designed for transfers," Gillis says. "It's a trade-off. Some people might get longer trips, or trips they choose not to take, but with a transfer network in the right place, the added frequency you get out of that makes so many more trips possible and desirable." 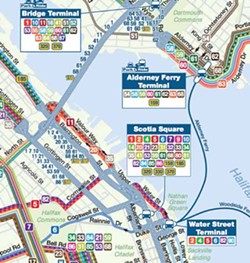 The grassroots IMTB organization, a partnership between Fusion Halifax and the Planning and Design Centre, has been working since 2011 to develop its own proposal for a redrawn transit system which offers high-frequency, on-time service to major areas within the municipality. Gillis believes Halifax Transit can get down to 10-minute service on major corridors, with other ancillary routes moving to 15-minute service, all while utilizing only 75 percent of Halifax Transit's currently allotted resources.

"They're all just a bunch of routes clumped together," says Gillis. "Our main position is take all of this duplication away and redeploy it somewhere useful."

Manager of planning Dave Reage says Halifax Transit isn't altogether abandoning high-frequency corridors, but deduced a total switchover wasn't possible. The delay in those plans, which were to be announced in October but now won't be out until January, apparently comes from the unparalleled scope of the project.

Reage calls it a "game-changer," and he's right. This is a turning point for the city. Easy, reliable transit service is a public right that any functioning city should offer.

It's More Than Buses will unveil its plans tonight, September 18 at The Bus Stop Theatre on Gottingen from 7-9 pm. Halifax Transit will release its initial draft network design in January, with a final plan tentatively set for October of next year. a