New automated announcement system will require something easier to understand than the current numbered garbage.

via Chris Grady (Hfx_chris) at Wikipedia.
Too many numbers, bro.

Next stop; to be determined. Halifax Transit is currently in the midst of figuring out how best to identity the municipality’s 2,700 bus stops, as the transit authority gets ready to implement an audio stop announcement system in the new year.

The upgrade is one of several features Halifax Transit is looking to introduce in 2016, most of which were detailed on Tuesday at HRM’s committee of the whole. The new automated system will announce and display upcoming stops to riders, which means that all of Halifax Transit’s 2,700 stops will need actual names.

Currently, Halifax Transit uses a numbered system to identify bus stops. The southern stop in front of the Central Library, for example, is 8327. The numbers are also route specific, which is why the Bridge Terminal has 16 different stops ranging from 7601 (for the 52 and 62 buses) to 7617 (for MetroX). 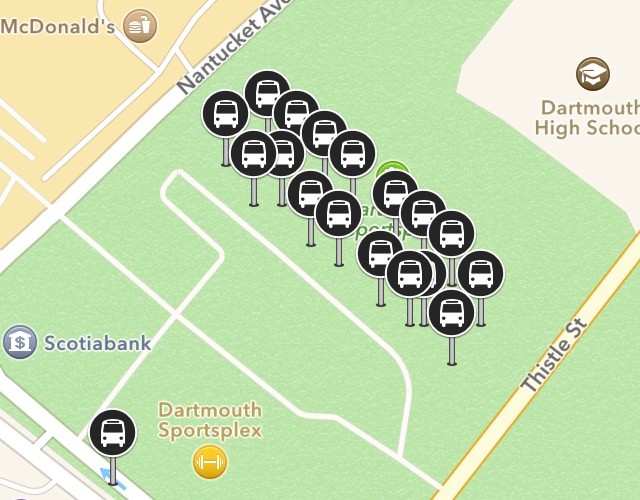 via Transit 360
The stops listed at the Dartmouth bridge terminal.

Obviously, announcing bus stop bingo numbers isn't of much use to passengers anxious about missing their stop. So Halifax Transit staffers are trying to devise a new naming system that's slightly less inscrutable. It’s been a challenge.

“That is the most difficult thing about this, the stop pronunciation,” outgoing Halifax Transit director Eddie Robar says. “We have to assign all of our 2,700 bus stops with a consistent naming convention." 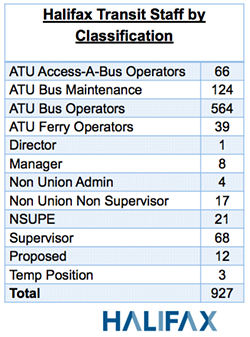 Because HRM isn’t built on a grid system like some other bigger cities, stop names can’t be based solely around intersections. Robar says the final system will likely be a mix of relevant civic addresses, intersections and local landmarks.

“If we’re sure they’re going to stay landmarks,” he adds. “You know, businesses close and open, so we've got to be very careful about what we use as those points.”

Not just that, but the computer-voiced system will have to learn the local nomenclature. Otherwise, “Agricola” could easily become “Agri-cola.”

“You have to work through all those nuances.”

At least one city councillor at this week’s committee of the whole didn’t really see the need for the costly new system. Matt Whitman questioned why bus drivers couldn’t just call out the stops themselves.

“When I’m on the bus, I could do it,” the deputy mayor half-joked.

Having drivers shout stop names, of course, would be useless to any passengers who are hard of hearing. The new system's LED display screens will be at least handle that much. But Robar also points to the many, many problems Toronto’s transit commission had when it implemented a similar policy several years ago. The TTC received multiple human rights complaints and drivers were routinely fined as they struggled to memorize and clearly announce thousands of stops. 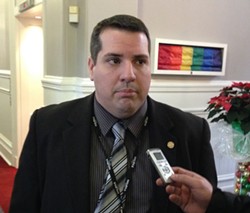 The Coast
Halifax Transit director Eddie Robar speaks with reporters at City Hall on his way out the door. Robar is leaving Halifax to run Edmonton’s transit authority.

"How do you have all this in your head?” Robar asks. “These drivers don't just drive one route. They drive multiple different routes a day. That is extremely difficult to even ask them to do that, and that has been proven time and time again in other jurisdictions.”

The automated stop announcements will be tested over a period of six to eight weeks before being wired into all of Halifax Transit’s fleet. Robar says that process will take up most of 2016, and won’t be fully completed until April 2017.

Other major upgrades Halifax Transit is hoping to implement next year will include publicly-available, real-time bus location tracking and automated passenger counters. Down the road, the transit authority is also planning for renovations to both the Halifax and Woodside ferry terminals, as well as examining a shift to alternative fuels (including compressed natural gas and electrical).

The new year will also finally produce the consultation report on Halifax Transit’s Moving Forward Together plan, which will dramatically blow up and rebuild the city's bus routes and schedules. Initial proposals for that plan drew criticisms from both communities angry that longtime routes were being redirected, and those who felt Halifax Transit wasn’t being radical enough.

Robar says more than 20,000 comments on the proposed changes were received during last winter’s public consultation process—four times the feedback they initially expected. Those comments are being analyzed now, and will be incorporated in the final report's recommendations.

Halifax Transit ridership is down 1.47 percent this year, but revenue is up by 2 percent. Robar pins that on the fare increase from 2013. He predicts next year's revenues will be down due Big Lift construction. “We’re cutting our service off on our main corridor every night.”