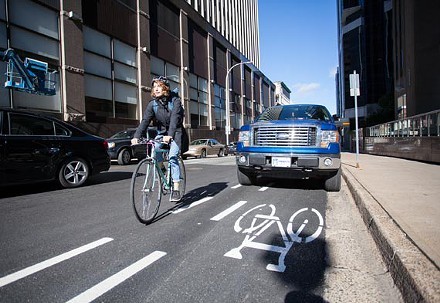 JORDAN BLACKBURN
The unprotected, painted bike line on Hollis Street.
The city’s new active transportation priorities don't have a lot of traction when it comes to improvements for the Hollis Street bike lane.

On Thursday HRM's Transportation Standing Committee voted to continue the ongoing planning process for a permanent, protected “all ages and abilities” bike route in the downtown, which will either enhance or replace current lanes on Lower Water and Hollis Streets.

But it'll take another 18 months, at least, before anything is ready to be installed. Meanwhile, no interim safety measures are going to be added to the perilous Hollis Street bikeway.

The much-anticipated IMP was unanimously endorsed by council earlier this week—a move hailed by active transportation advocates as a culture shift towards improving walking, cycling and public transit in HRM.

Included in that vote was an amendment to move up the target date for a completed Halifax bike lane network to 2020.

If the city wants to meet that ambitious goal, Lane says it needs to start prioritizing what’s needed now, rather than waiting for what’s going to happen tomorrow.

“The issues that people are experiencing on that lane are very real today,” she says. “We have to do better than telling them to wait for years when it comes to their safety.”

Delayed for years, the Hollis Street lane was finally installed in the summer of 2015 and has since earned a reputation as one of the most dangerous in the city.

According to HRM staff (and social media evidence), it’s routinely and illegally blocked by parked cars and delivery trucks. Cyclists have to suddenly merge from the left into south-bound traffic full of trucks headed for the container terminal.

The cycling coalition—and municipal staff—say the current configuration isn’t safe even for the most experienced cyclists. Which is why Lane wants an interim solution now, rather than waiting another two years for a permanent, protected bike lane downtown.

“It’s treated like an option, not an imperative,” she says. “It’s almost like they put off what we can do today for what we can do tomorrow...I think we really need to flip that on its head.”

Lane says installing plastic bollards, such as those already in place on Rainnie Drive, could be done in a couple of months. The $30,000 cost could also be accommodated within the Transportation and Public Works department's capital budget.

Municipal staff warn it's not that easy, though. Thursday's report says there would still likely be two breaks in the barriers to accommodate a hotel loading zone and construction site. The bollards would also have a severe impact on the loading vans, deliveries, couriers and other vehicles currently using the lane (often illegally).

Area councillor Waye Mason calls the decision to hold off on an interim solution disappointing, “but not necessarily critical.”

Speaking at Thursday’s meeting, Mason predicted staff will likely come back from current public engagement sessions favouring a bi-directional protected lane along Lower Water Street. While waiting for that report, the deputy mayor suggests staff should focus next year on installing what bike lanes they can elsewhere in the city.

“I’m OK putting a pause on this as long as I know other things are happening in the next construction season,” said Mason. “I really think that it’s very important that we actually construct these bike lanes next year.”

Lane says Mason's comments are disheartening, however. Residents are putting their lives at risk every day on Hollis Street for something that has an easy fix and council, she adds, has a “nonchalant attitude” about the matter.

“The moment it comes to do something...they’re just kicking that can down the line.”

The staff report on a permanent north-south bike route downtown won't be completed until at least late winter next year. By the spring, it’ll be a year-and-a-half since the last bike lane was installed in HRM.