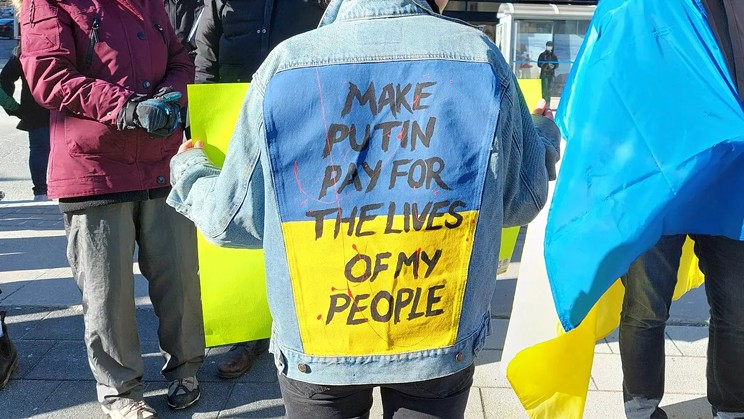 Oriol Salvador / The Coast
One of the protesters during the rally in support of Ukraine on Thursday, Feb 24.

The Nova Scotian chapter of the Ukrainian Canadian Congress organizes a call to action this weekend in Halifax.

Wednesday evening’s news shifted the global focus to Ukraine. After months of threats, Putin triggered the Russian invasion of Ukraine. Explosions were reported in Kyiv and other cities, while HMCS Halifax is being deployed overseas to join other NATO forces in the Mediterranean region.

Locally, the Nova Scotian chapter of the Ukrainian Canadian Congress has been mobilizing since January to draw local attention to the issue, as reported by The Signal.

Now, with the world watching they are mobilizing for a call to action at the Halifax City Hall in Grand Parade on Saturday, February 26, at 4pm. Their demands are to show the strength of the Ukrainian community in the face of Russian aggression, and demand sanctions for Russia. Organizer Stas Serebriakov says the message is not just about stopping Putin, but “giving a chance to Ukraine to live, to leave Ukraine alone.”

Serebriakov shared that choosing the Central Library as the location for a first protest on Thursday is not trivial. “Libraries are a place for history and wisdom, we should take the lessons from the past that evil must be stopped and taken into accountability, or it will act again.”

The Ukrainian Canadian Congress asks everyone to show their support for Ukraine this Saturday with Ukrainian flags and banners.

What you need to know about the Emergencies Act in Canada