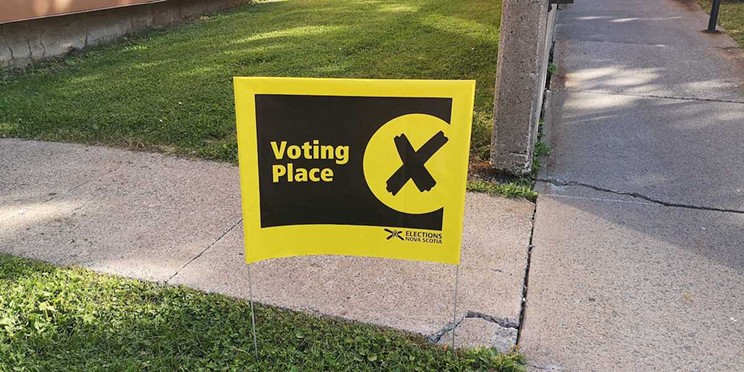 The Coast
Election day is here! Come back for Halifax results after polls close at 8pm.

Your guide to candidates and winners for core HRM now that Tim Houston is premier.

Happy post-election, Nova Scotia. After an interesting 31-day campaign dominated by talk of health care, rent control and sexism—not to mention a federal election call arriving at the tail end of the provincial campaign—the province elected a Progressive Conservative government. Tim Houston will be Nova Scotia's next premier.

For the best look at election results in the 55 ridings across the province, turn to CBC Nova Scotia. At The Coast, our focus is on the following 13 ridings that make up the urban heart of Halifax Regional Municipality. This story will be updated Wednesday morning following final results. Here's what we know so far:

Claudia Chender, the incumbent NDP MLA, won the Dartmouth South seat handily, by about 1,570 votes. She beat the PC’s Christopher Curtis and Skylar Martini, who represented the Greens.

Robyn Ingraham was the Liberal candidate for this riding before withdrawing from the race. Ingraham said in a statement she was asked to blame her mental health for her exit, but in reality the surfacing of boudoir photos made Liberal “higher ups” worried. Ingraham said she was sent two prepared statements from the Liberal party to announce her departure from the race. In order to fill the vacancy, the party nominated Liberal caucus staffer Lesley Mackey to hold the banner.

Incumbent NDP Susan Leblanc won the Dartmouth North seat. She was up against the PC's Lisa Coates, the Liberal’s Pamela Cooley and the Green’s Carolyn Marshall.

In Preston, lawyer Angela Simmonds won under the Liberal banner. She beat the NDP’s Colter Simmonds, the founder of We Will Win Youth Association, and PC Archy Beals. Beals is a student advisor at Nova Scotia Community College and advises through the school’s African Canadian Support program.

With three Black contenders in Preston this year, it’s believed to be the first time any of Nova Scotia’s ridings have had an all-Black slate of candidates. After 18 years representing one of Canada’s oldest and largest Black communities, fisheries minister Keith Colwell retired. Colwell won the seat held by city councillor David Hendsbee in 2003. The area has been represented by a white MLA since 1999.

With Liberal immigration minister Lena Metlege Diab moving towards federal politics, new candidate and firefighter Ali Duale won for the Libs in the Armdale riding. By a margin of about 450 votes Duale beat NDP candidate Julie Melanson. She's president of Halifax Recovery Society and you may have seen her on TikTok. Representing the Progressive Conservatives was teacher Richard MacLean. The Green Party’s co-president and past federal interim leader, Jo-Ann Roberts, was the fourth candidate in Armdale.

With 28 of 35 polls reported, NDP Lisa Lachance appears to have beat incumbent Liberal finance minister Labi Kousoulis. Kousoulis was the runner up in this winter's Liberal leadership race. Lisa Lachance has worked for the federal government on policy, finance and international human rights. Lachance was up against Sheri Morgan, the PC candidate focused on improving access to urogynecologists. Morgan attracted attention with her campaign signs which featured a V-shaped hand gesture and read #VaginalHealth. Noah Hollis, a recent grad from Carleton University, is standing for the Greens.

Liberal party leader Iain Rankin lost his job as premier, but he still kept the MLA seat in his home community of Timberlea. He was up against Bill Healy for the PCs, Raymond Theriault representing the NDP and Harry Ward for the Greens.

The Cole Harbour voting district looks very different this year due to changed boundaries for this election, which added the Cole Harbour-Dartmouth riding. In the new riding, retired HRM city councillor Lorelei Nicoll won under the Liberal banner by a margin of over 1,000 votes. She was up against health care worker Melody Pentland for the NDP and real estate agent Karina Sanford, who ran for the PCs. The Greens were represented by Rana Zaman, a social activist.

With files from Raeesa Alibhai