Halifax Regional Police is all-in on body cameras, but police board isn't so sure 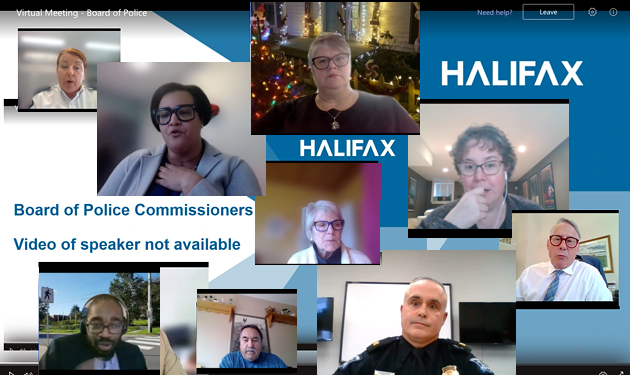 Caora McKenna/ HRM
Councillor Becky Kent joins the board of police commissioners for her first meeting since being appointed after being elected.


Halifax’s board of police commissioners didn’t make it through all the items on its agenda again this week, and all the things that did get discussed also got deferred. So technically there's nothing concrete to report but there are things worthy of reporting nonetheless.

The commissioners voted to defer a decision on body-worn cameras to their next meeting, asking for more information from HRP after what was supposed to be a pilot-project feasibility report was presented as a five-year all-in plan.

Former commissioner Tony Mancini asked for the report in July, noting that the last time HRP had looked into body-worn cameras in 2017, one main reason not to go forward with the project was the price. He guessed that it’d be cheaper to implement now with advances in technology.

That part is true. The 2017 pilot project proposed 50 cameras with a $7.52 million price tag over five years. Inspector Greg Robertson said in his presentation this week that a total rollout of 300 cameras would cost $3.71 million over five years.

The 2017 decision to abandon the cameras was the result of two reports, one of which was a literature review done by HRP’s research coordinator Chris Giacomantonio. “While the technology may have some value,” wrote Giacomantonio in a memorandum to then chief Jean-Michel Blais “the evidence to date does not justify the expenditure, especially when taken in consideration of other ways to spend a similar amount on policing or public safety initiatives in HRM.”

The report presented this week—only ten airy pages long—didn’t acknowledge the earlier findings or present any new ones to justify HRP’s change in opinion, mostly citing that other places in Canada are doing it as justification.

At the meeting, chief Kinsella said “The majority of police services who did run a pilot are in fact in full deployment now,” adding that “we believe that body-worn cameras have a strong potential to improve transparency, civility and training opportunities, evidence and opportunities to build trust.”

Harry Critchley, vice-chair of the East Coast Prison Justice Society and member of the Nova Scotia Policing Policy Working Group, says that if improving transparency and accountability is the goal, there are things HRP could do other than spend $3.7 million on cameras, like putting money towards helping people who are up against the Nova Scotia police review board get access to decent legal representation.

He also says the notion that cameras are inherently unbiased "just isn't the case." As proposed right now, officers would be in charge of turning on their cameras when they are participating in an investigation. “So the footage itself may not be biased, but that doesn’t necessarily mean that when we get that footage isn’t biased,” says Critchley.

Police would also be in charge of how that camera footage is used and when it can be accessed by citizens. Police would be at the releasing end of a freedom of information request should someone want the footage of their own incident with police.

Critchley also says that though some Canadian police forces have turned their pilot projects into full-on rollouts, some have not. Both Edmonton and Montreal decided to discontinue the use of body-worn cameras, with Edmonton's police service reporting no statistically significant evidence that body-worn cameras reduced police use-of-force.

Most commissioners, including District 3’s newly-elected Becky Kent—who replaced Mancini on the board of police commissioners in council’s latest rejig of positions—said the board needed a bit more information before it could approve the new tool and its significant price tag.

Critchley agrees, mentioning the affordable housing projects HRM just approved last month. For $3.9 million, Adsum Women and Children will build 25 units of affordable housing. “It’s on that scale of project,” he says. “It's not one that we should be making based on our knee-jerk reactions.”

Councillor Lisa Blackburn shared those reservations, saying it was important to her that good policy was in place around the use of body-worn cameras before there was funding approval. Councillor Lindell Smith wanted to know what other academic research was out there about the cameras, and how that fits into the context of this decision.

Kinsella said the data just isn’t there. But Critchley says there is plenty, and it’s been circulated with the board and HRP already. “In 2019, researchers from George Mason University conducted the most comprehensive literature review to date of the research evidence base for body‐worn cameras (“BWCs”), examining 70 empirical studies of BWCs covering the impact of cameras on officer behaviour, officer perceptions, citizen behaviour, citizen perceptions, police investigations, and police organizations,” reads a letter sent from the Nova Scotia Policing Policy Working Group to the board in July.

The report said that “Although officers and citizens are generally supportive of BWC use, BWCs have not had statistically significant or consistent effects on most measures of officer and citizen behaviour or citizens’ views of police. Expectations and concerns surrounding BWCs among police leaders and citizens have not yet been realized by and large in the ways anticipated by each.”

With the recent calls for defunding the police and the board currently putting together a working group to reevaluate how police resources are spent, councillor Smith wondered if there was really any urgency to get this rolling now.

With that, the board left the issue at a deferral, asking HRP to do some more research and come back with a plan for the policies that will guide how the cameras will be used and the footage stored and released. Ideally, it will cite some of the many articles Smith said they can easily find doing a Google scholar search. (Smith also asked his Instagram following for their thoughts and got a ton of responses that highlight some of the different perspectives on the issue.)

The board also discussed HRP’s proposed budget for the 2021/22 year. It’s a 2.8 percent increase from last year’s Covid-cut budget. It’s mostly increases in compensation. The municipality's chief financial officer Jane Fraser said that HRP and HRM are in contract negotiations right now, but the department was given a target of just over $86 million, and HRP is asking for an extra $270,000 on top of that to employ someone to tackle the backlog of court dispositions (for $85,800), someone to make videos of training modules (for $101,200) and $60,000 for Journey to Change training—which comes out of the Wortley report on street checks and is about diversity and inclusion.

After discussing but making no official decisions about increasing funding to police, the board discussed logistics about its committee to look at defunding the police. Talk of using the board’s yearly budget to provide some honorariums for committee members was also deferred.

In a habit of not getting through all its agenda items and deferring things for many months at a time, councillor Smith asked if the board should schedule a second meeting for January. He got no direct answer.