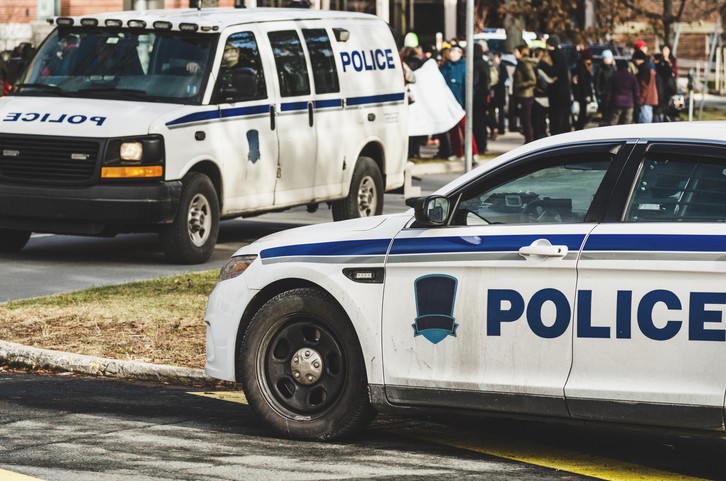 Stock
HRM told the BOPC that HRP can have almost $1.4 million in new funding—less than the nearly $2 million HRP wanted, but far from defunding the police.

he back-and-forth budgeting process between city hall and the Board of Police Commissioners sends a $1.4 million increase to the BOPC this afternoon for approval.

To really understand the police budget means starting with the acronyms, not the numbers. HRP—the Halifax Regional Police department—wanted more money in its budget this year. HRP told its governing Board of Police Commissioners, the BOPC, which agreed with the department, so then the BOPC went to its higher power: HRM, the Halifax Regional Municipality. HRP and the BOPC asked for an increase of $1.98 million in HRP’s 2022-23 budget, but the HRM budget committee recommended a slightly smaller increase of just under $1.4 million instead, which the BOPC is discussing today. (UPDATE: The BOPC voted to accept the increase.)

How did we get here?

In late February, 20 residents told Halifax’s budget committee they didn’t want to see the proposed $1.98 million increase in the police budget get approved. Speakers from the public all expressed the same sentiment: the police should have less money, not more. “How will HRP be held accountable with two million extra dollars?” asked District 7 resident Carmel Farahbakhsh. Halifax sociologist Hailie Tattrie said, “the last thing that police need is more funding.”

Resident and advocate Sakura Saunders told the board that a “large portion of the population” has lost trust in police recently, including herself. Saunders cited incidents including the arrest of a Black mother in front of her young children, the arrest and assault of a Black teen for being outside of Bedford mall, years of racist street checks, the death of Corey Rogers in HRP custody and the incidents at the Halifax Memorial Library grounds August 18 as examples.

Requests to defund the police were repeated over and over, up to and including the final resident who spoke, Nancy Hunter. “We cannot support an increase that is totally unjustified,” she said.

But after lunch, it was HRP’s turn to make its pitch for a budget increase. “We’re going to provide some background on the ‘crime severity index,’” said HRP chief Dan Kinsella, before launching into a lengthy slideshow presentation that boiled a whole city’s worth of malfeasance into a simple number. Back in 2010, Halifax’s crime severity index was 98, a high number for a high-crime year. In 2019, it was at a low of 61, then stayed pretty low for 2020, the most recent year available, with a score of 62.

Despite that relatively low level of crime (and the fact that HRP is also projecting to end the 2021-22 year with a surplus of more than $1.2 million), Kinsella’s slideshow laid out proposed budget increases. These included $663,000 to hire eight new traffic constables, $165,700 for two new hate unit constables and $663,100 for eight emergency response communicators. 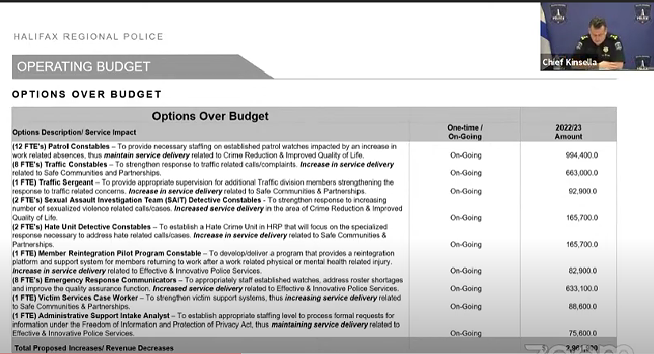 HRP
Slide 1 of 2 showing how HRP ended up with a budget surplus of 1.1 percent or almost $1 million this year.
click to enlarge

HRP
Slide 1 of 2 showing how HRP ended up with a budget surplus of 1.1 percent or almost $1 million this year.

However, the last part of Kinsella’s presentation to the budget committee wasn’t revealed to the public. HRM councillor Paul Russell, who chairs the budget committe, said “there was some confidential information that chief Kinsella has imparted at the Board of Police Commissioners meeting,” and suggested the budget session move in camera.

Councillor Becky Kent, who sits on both the BOPC and budget committee, said she wanted to go in camera for all committee members to “have the full context” of why the BOPC approved the HRP budget increase. But not everyone was sure.

“How do we pinpoint when it is appropriate here to be going in camera versus going in camera to discuss things that are more general in staffing that really should be in public?” asked councillor Sam Austin.

In response, John Traves, the city’s municipal solicitor, said HRP could cite any number of reasons for going behind closed doors, including personnel matters, contract negotiations, labour relations and information that would violate federal RCMP privacy regulations. Minutes later on the webcast, a holding screen appeared for the public as the meeting moved to a private feed.

The closed-door meeting lasted the rest of that day, and when the committee reconvened two days later, it continued in camera for another hour. When the city’s public YouTube feed finally flickered back to life, councillors began by sharing their views on the proposed budget increase. The main motion was put on the floor by councillor Waye Mason.

“I hate going first on this because I suspect I’m in the minority,” he said. “I can’t support the proposed increase to the HRP base budget at this time—and I’m not anti-police.” Mason said he was thankful for hearing from residents. “Those are very real experiences, it must be of concern to all of us.”

“The bottom line for me is I can’t support this budget; I can’t support the over-ask of three million,” said Savage. But his priorities were less focused on defunding the police and more on the potential property tax increase: “That by itself, the report tells us, would increase the tax rate by half a point.”

But councillors Kent, Shawn Cleary and David Hendsbee spoke out in favour of the full increase. “Can we do better in our policing services? Absolutely, we’ve all agreed on that,” said Kent. “But right now we have a police force that we have an obligation to create a safe environment for our communities. Safety is paramount, but also the safety of our officers.”

Kent also said she’d heard from “many, many people on both sides” of the policing issue. Cleary said the 20 people who spoke Wednesday had good points, but he heard from people “who sent in emails, called me, stopped me on the street, that have a more wide set of perspectives.”

Even councillors who didn’t agree with the full budget increase spoke of their respect for police “Thank you very much to every officer who is out there, for the work that you do” said Lovelace. “We would not have public safety without you.”

Some councillors gave vague insight into what may have been said during the in camera portion of the meeting, which Kinsella said beforehand would include info on things like “officer burnout.” Afterwards, councillor Tim Outhit said that “disturbing facts” were revealed about the staffing situation.

And while councillors agreed defunding certainly needed to be discussed, some said they didn’t want to do it without a plan. “I don’t think it would be realistic or responsible just to cut because a bunch of people said you gotta cut,” Cleary said. “I think what we need to do is detask and retask and do it responsibly. But it’s going to take several years.”

After lunch on day two, nearly 10 hours into the budget meeting, it was Austin who suggested that “we send the budget back to the police commission, with a number that we like.”

Councillor Trish Purdy agreed, saying, “I would support if someone proposed that we send this back to the board to tweak it, and to really dissect it.”

A motion to cap the budget increase at $1.393,850 was soon put on the floor by Mancini. It passed with a vote of 9-8 with Savage and councillors Tim Outhit, Hendsbee, Purdy, Mancini, Mason, Smith, Cleary and Kathryn Morse supporting the motion.

HRM chief administrative officer Jacques Dubé said the HRP budget would need to be passed by the BOPC, then returned to the budget committee by March 15 to prevent delays in approving the full 2022-23 municipal budget by April 12. “Time is of an essence for sure,” said chief financial officer Jerry Blackwood.

The BOPC re-opened its discussion of the HRP budget during a special meeting on March 9. With city staff emphasizing the time constraints on the budget process, the board voted to accept the budget committee’s proposal rather than asking for more (or less).

The budget will return to budget committee on Friday, and once approved the 2022-23 HRP budget is increasing by nearly $1.4 million from last year—a little less than the original ask, but a lot more than what residents were asking for in their calls to defund the police.