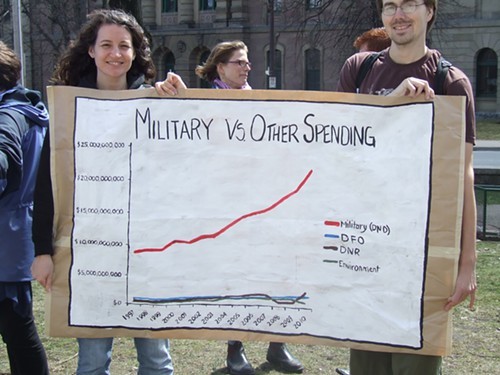 A quintet of “Raging Grannies” belted out Give Peace A Chance in the bright sunshine outside the Spring Garden Library at noon today as part of a Global Day of Action on Military Spending. About 40 demonstrators held up signs and waved placards calling on Canada’s politicians to re-direct military spending to health, education, children and the environment.

“We don’t feel that so much money should be spent on the military when people are homeless,” said Julia Creighton, one of the organizers of the rally. Creighton, a member of the Halifax Peace Coalition, added that governments should have other priorities partly because of Canada’s aging population.

“Every day we see that Alzheimer’s is going to be skyrocketing in the next generation. There aren’t enough beds for long-term care so that this is where the money needs to go rather than to the military,” Creighton said.

Today’s rally, one of more than 100 such events in 35 countries, came the day after the release of new figures showing that last year, world military spending reached a record $1.6 trillion US. The figures from SIPRI, the Stockholm International Peace Research Institute, also showed that the US continues to spend almost as much as all other countries combined — 43 percent of the world’s total and six times more than its nearest rival, China. SIPRI reports that US military spending has increased 81 percent since 2001, the year of the 9/11 attacks in New York and Washington.

SIPRI figures show that Canada’s military spending has reached about $23 billion ranking it among the world’s highest spenders. In fact, last year, SIPRI placed Canada 13th on the list of the 15 biggest military spenders.

According to a report released last month by the Canadian Centre for Policy Alternatives, Canada has spent an extra $30.9 billion on its military since the 9/11 attacks. About half of that money went to Canadian participation in the war in Afghanistan.

Military spending and the election

“We’re trying to draw attention to the huge amount of money that’s spent on the military,” says Sandy Greenberg, one of the organizers of today’s rally in Halifax. “We’re trying to make it an election issue and make people aware that we have the ability to set other priorities.”

Greenberg, who is a member of the Nova Scotia Voice of Women for Peace, adds that for one thing, some of the billions spent on the military could be allocated to the environment instead.

“From what I’ve read, there’s more of a threat globally from the climate crisis than from military actions,” she says. “If we use the money to mitigate climate change we might have a lot more secure world.”