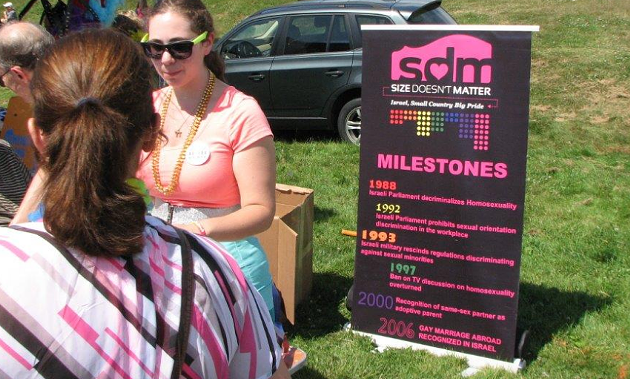 via CIJA
The "Size Doesn't Matter" campaign at Halifax Pride.

It started as a dispute about whether a pro-Israel tourism campaign should be allowed at Halifax Pride. Now, it’s erupted into a debate over freedom of expression and the role of pinkwashing at the festival.

A motion at the Halifax Pride society’s annual general meeting on October 5 would remove “pinkwashing” content from future festivals. Pinkwashing is a term often used to describe a corporation or government diverting attention from its own human rights record by marketing itself as gay-friendly.

The resolution asks that Pride actively identify, remove and disengage from any content that pinkwashes international humanitarian law violations. It would also have Pride re-commit itself to acknowledging the concerns of black, Indigenous and other non-white groups within the LGBTQ+ community, “in order to create a festival that is inclusive to everyone.”

The idea is being brought forward by the Queer Arabs of Halifax (QAH) in response to the presence of Tel Aviv tourism materials at the Atlantic Jewish Council’s (AJC) table during Pride’s yearly community fair. The “Size Doesn’t Matter” campaign is run by the Canadian Centre for Israel and Jewish Affairs (CIJA) in Ottawa. The AJC provides the table at Pride, and CIJA provides the promotional materials.

This past summer, the QAH submitted a letter to Pride’s board expressing its concern with the campaign materials, given the Israeli government’s international human rights record against the Palestinian people. That letter was accompanied with a petition from the Nova Scotia Rainbow Action Project (NSRAP) that was signed by 500 individuals and organizations—including South House and the Rainbow Refugee Association of Nova Scotia.

On its website, the NSRAP stresses the request to remove the “Size Doesn’t Matter” materials is not a motion against the State of Israel, Judaism or the AJC, but against foreign governments funding local lobbyists to do PR at Pride.

“Given the complexity and tragedy of the conflict between Israel and Palestine, we simply don’t think that advertising tourism to the region as a way to sway public sentiment is just or ethical,” writes the NSRAP.

The organization says it’s faced racist backlash and received numerous anti-Arab messages since voicing its support for the pinkwashing resolution.

“This is not about Israel,” the NSRAP website reads. “This is about our local LGBTQ community and the ways in which LGBTQ people of colour are marginalized, dismissed and ultimately seen as unimportant by past and present boards of Halifax Pride.”

The Atlantic Jewish Council feels differently. In a Facebook post headlined “FIGHT DISCRIMINATION,” the organization claims the resolution is “targeting Israel” and “would ban the Jewish community from highlighting Israel’s thriving LGBTQ+ community.”

As such, the AJC is offering to shuttle supporters to the meeting and vote against the resolution. The group’s even offering free food and childcare to whoever can make it out on Wednesday. Likewise, supporters of the QAH (such as Dalhousie’s Students for Justice in Palestine) are organizing similar initiatives.

Progressive Conservative leader Jamie Baillie has also waded into the discussion without being asked, tweeting a letter that the Opposition leader sent to Pride Society chair Willem Blois opposing the resolution.

“It is hard to imagine a more absurd injustice than the thought of the Halifax Pride Society voting to suppress the view and opinions of another vibrant part of our local community,” writes Bailie, who says the proposed motion would undermine Pride’s mission of accessibility to all and have “drastic, far-reaching effects” on the society’s future.

“...should this resolution pass, I cannot in good conscience, participate in any future Halifax Pride Society events, knowing the society has turned its back on its true mission.”

Another resolution at Wednesday’s meeting, proposed by lawyer and past NSRAP chair Kevin Kindred, aims to counter the pinkwashing resolution by asking Pride to recommit itself to freedom of expression.

“I think this is a watershed moment for the community,” writes Kindred on Facebook. “I think we're on the brink of a possibly really bad decision, to start letting Pride dictate to community groups what they can and can't say as participants in Pride.”

A third resolution asks Pride to prioritize outreach to minority and marginalized groups in the LGBTQ+ community, in order that those individuals can “participate in Pride free from censorship, exclusion or limitations on freedom of expression.”

The AGM takes place October 5 at the Halifax Marriott Harbourfront from 6:30-8:30pm.