The decision was not made lightly, says Blais, who walks away from the position a year earlier than he originally planned. 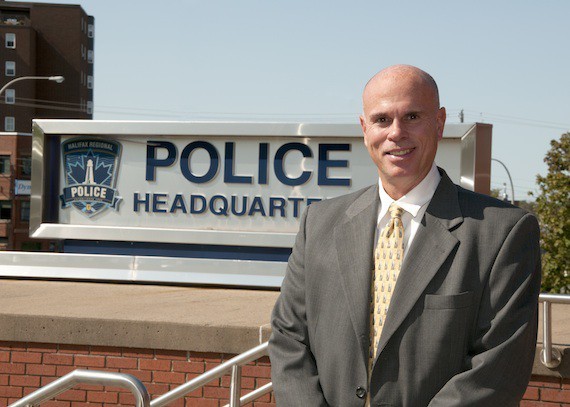 The chief made the announcement Wednesday via press release, in which he thanked HRP employees and HRM citizens for the “incredible honour” it's been to serve.

“Leading the dedicated Halifax Regional Police team and serving our community as chief of police have been two of the greatest privileges of my professional life,” Blais states. “The decision to retire is not one I made lightly.”

At a press conference Wednesday afternoon, a group of reporters grilled Blais for an answer to why exactly he’s retiring. But if the chief has a particular reason, he didn’t spill it.

“We all have to retire at one point or another,” he said, “and that includes you as well.”

Blais did credit HRP’s management team as a factor that lets him leave knowing the department will be OK.

At his press conference, HRP chief and dedicated rule-enforcer Blais said he's going to be "refereeing a lot more hockey" after his retirement.
“We have a very senior, but a very mature management style,” he said. “One of the key accomplishments that we’ve brought about in the last few years has been a change in how we arrive at decisions. So I think now is a good time to be able to make that change.”

The chief will continue on in the role until March 31, 2019. A recruitment process for a replacement will be helmed by the Board of Police Commissioners.

“I thank chief Blais for his service and dedication to the citizens of HRM in his role as chief of police,” councillor Steve Craig, chair of the Board of Police Commissioners said in the same release. “We look forward to a smooth transition and a thorough selection process for the next chief.”

Whether that person is an internal hire or an outsider like Blais was when he left the RCMP to join the city cops, the outgoing-chief thinks the department will be welcoming.

“Change is always difficult for people, but I want to bring it back to about six years ago when I had applied for this and was coming in from my former employment, and that was considered to be groundbreaking. The people on the ground were just fantastic and very supportive of me, so my expectation is that that will continue.”

Blais was appointed to the role in 2012, replacing former chief Frank Beazley.

He came to the position after 25 years with the RCMP and three tours with the United Nations in Haiti, during which he developed Post-Traumatic Stress Disorder. (The chief has since become a vocal advocate for others who suffer from PTSD.)

A self-described leftie, Blais’ tenure has been spent trying to address larger societal concerns about policing, even while HRP's operations were struck by numerous blows, including a disastrous lack of evidence control and the continued overrepresentation of African Nova Scotians in police street checks.

The chief's original five-year work term was extended last August by the Board of Police Commissioners. At the time, Blais told reporters his desire was to stay on in the role until 2020.

“I’ve let the CAO know my desire is to only do three years,” he said last summer. “I’m not going anywhere.”

As for future plans, Blais was noncommittal about entering politics—although he has read former MLA Graham Steele’s books.

“The more applicable question is: What plans do I have afterwards?” he says. “Aside from refereeing a lot of hockey, none at this point. Who knows, I might become a journalist.”