A report from SFU highlights what makes HRM uniquely bad for walkers and cyclists.

If you're someone who tends to bike or walk in the city—there’s some new information about pedestrian safety you might want to know. A new study led by Simon Fraser University has compiled a new top 10 list of the most dangerous areas for cyclists and pedestrians in the Halifax Regional Municipality.

The researchers used the Nova Scotia Trauma Registry to find the places pedestrians had the highest number of severe injuries from motor vehicle collisions, and found that these hotspots generally have no crosswalks, medians, or traffic calming measures and are places where pedestrians were often forced to cross four or more lanes of heavy traffic with regularity to reach a bus stop, retail establishment or sports complex. 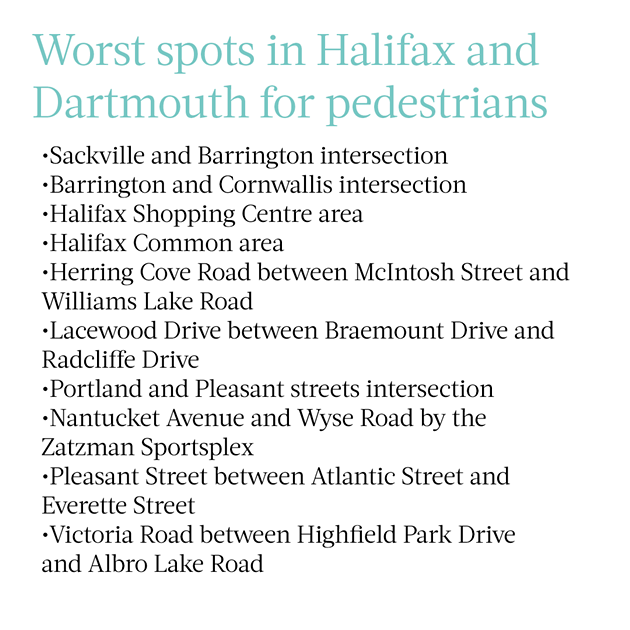 Comparing the results to Vancouver, Geography professor Nadine Schuurman was shocked. Vancouver's worst spots were around bars and downtown, where there are a lot of people walking around, sometimes drunk.

Schuurman says infrastructure needs to be made which goes beyond just the need for more crosswalks. “It would be really nice to see Canada follow the lead of say other European cities and basically prioritize pedestrian and cycle traffic. If you think like a cyclist or think like a pedestrian some of the solutions become really clear from an engineering point of you,” she says.

According to the vehicle/pedestrian collision report released last January by Halifax Regional Police there were a total of 175 pedestrians hit in 168 pedestrian-vehicle collisions in Halifax last year. That's about 100 fewer than in 2017. But traffic deaths increased from 28 in 2017 to 76 in between 2017 and 2018. And 12 of those 76 were pedestrian deaths: double the amount of the previous two years combined making it the most pedestrians killed since 2006.

Renée Savoie, co-chair of Nova Scotia Disability Employee Network was a victim herself in a pedestrian collision just last year. Last January Savoie and her guide dog Freedom were coming home from work and got off at their usual bus stop.

“I crossed Creighton. I was about to cross Oak to go into my driveway and a woman just short turned and took me right out,” says Savoie. She ended up with a serious injury to her left knee which still requires physiotherapy.

Savoie says this isn’t the first time she and Freedom have had trouble crossing the street in the city. “I’m just glad Freedom got out of the way. My guide dog has saved me a couple of times from being hit by a car but there was nothing she could do,” she adds.

Schuurman and her team hope that their research will inform city officials and help keep pedestrians safe. At this time HRM staff are currently in the process of reviewing Schuurman's report so they say it would be premature to comment at this time.

Schuurman says if we understand where pedestrian injuries happen we can better implement prevention strategies. A new Strategic Road Safety Framework annual information report which will include a proposed plan to reduce all fatal and injury collisions in the upcoming year (2020-21) is currently being finalized and will be presented to the Regional Council. The report is expected to go before council this August.