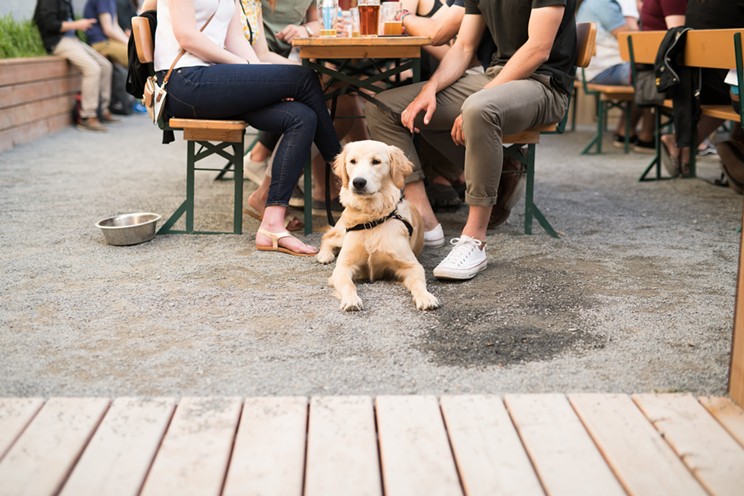 Pups and pints on patios will now be a common occurrence across the province. RYAN WILLIAMS

Get excited to pet Tucker at the patio bar, but don’t forget that a segment of the human population is still waiting for equal access.

On Tuesday, March 30, Nova Scotia’s department of environment and climate change went to the dogs with an announcement: Effective immediately, restaurant, cafe and bar patios will be allowed to welcome pet four-legged friends of the canine variety. “They’ll have to follow, obviously, some safety protocols, but I think it’s a great way to introduce a new policy to allow more people,” said premier Iain Rankin at his regular COVID-19 press conference Tuesday.

Maybe it’s a ruse to distract people from the ongoing clear-cutting of provincial forests, or the new premier just really loves his pooch. Whatever the reason, the government says in its press release that the change is part of its plan to “remove unnecessary barriers for restaurants to meet customer needs.”

The president of the Restaurant Association of Nova Scotia, Gordon Stewart, says it will drive up sales by five percent. “Many dog owners are more likely to linger on their favourite patio, and order food or another beverage, if their dog can stay with them. It's good for our industry and good for customers,” he’s quoted as saying in the release.

Pets and pints: Navigating the grey area around bringing your dog to the patio: Some business owners say the province should relax its laws to let more puppers out to play

But for most customers who need “barriers” removed, their guide dogs and service dogs have been allowed on patios (as well as inside restaurants and businesses) for years, thanks to the Service Dog Act and Blind Persons’ Rights Act.

While the new rule doesn’t force patios to have dogs–“Individual business owners can decide whether to allow” them, says the province’s release–neither does it demand pets be specially trained before parking their furry behinds beside you during dinner. The province says pet waste must be cleaned up immediately, and pups have to stay on the ground and out of the aisles–but the onus to kick out patrons with ill-behaved pooches is still put on the restaurant or bar staff who may not get paid enough to kick up a fuss.

“I’m worried that, you know, there’s going to be some dogs that are not well-behaved on patios,” says Shelley Adams, a visually impaired Halifax resident who uses a guide dog named Rookie. “It’s going to happen.”

“Premier Rankin made the comment this will be a better customer experience, allowing your dogs. But if I can’t get up on the patio, that’s no experience for me.”

Adams anticipates her guide dog will get distracted by the plethora of pooches that will soon be on patios. He’s trained not to get distracted while he’s working, “but he’s also a dog,” says Adams. “So if there’s dogs that are not well-trained or are barking at him, then of course he’s going to be interested, whether it’s in a good way or a bad way, like scared of them or wants to play with them.”

It won’t be every dog that causes a distraction, but Adams hopes people will leave their untrained dogs at home. “I can’t be working him if he’s distracted,” she says. “If he gets excited, I just know I’ve got to stop and get him to sit, wait for that dog to go away and then keep going.”

And while many patio patrons will welcome the loving licks and puppy dog eyes, those with allergies, previous dog-related trauma or a simple desire to enjoy their meal in pet-free peace, may not welcome the extra guests.

For some disabled people, allowing pets in a place they can’t yet access is like a slap in the face. “When I saw the announcement, it caught me off guard at first,” says Darrel MacDonald, an HRM resident who uses a wheelchair. “I’ve had my experience dealing with outdoor patios that have not been accessible, and have been impeaching on existing handicap parking spots”

There’s nothing spontaneous about a night out in Halifax for someone who uses a mobility device: From stairs to small stalls, Halifax's bars and clubs are full of barriers to accessibility.

MacDonald says there are many patios with ropes, steps and/or tightly packed tables and chairs that don’t allow a wheelchair to pass. He hasn’t gone out much since Covid hit, but “the couple of restaurants that I have gone, I always have to look ahead, to go online and try to find pictures of the layout, how can I get into that restaurant?”

It’s only been since October 2020 that any new restaurant will need to have fully accessible hallways, counters and washrooms to obtain a food permit. Many older buildings, and their patios, still lack this access.

“The dog’s allowed on the patio but the wheelchair user can’t get on the patio,” MacDonald says. “So it’s kind of ironic.”

When asked, premier Rankin said legislation for having the province fully accessible will come by 2030: “There’s still a lot of work underway with the directorate, there’s resources in this budget, it’s a really important commitment that we continue to work on as a government.” But 2030 is still nine years away.

“We shouldn’t have to wait for that benchmark,” MacDonald says. “I’ve been in a chair for 22 years, and the society is just now waking up to some of the pitfalls of being a wheelchair user.”

Some members of the restaurant industry have been campaigning for dogs to be allowed since at least 2018, and even before the new rule change, many restaurants permitted pups. But people who aren’t able to climb stairs, sit in tall bar seats or depend on electric wheelchairs that don’t “fit” are still left behind while their friends clink glasses this summer.

“Premier Rankin made the comment this will be a better customer experience, allowing your dogs,” says MacDonald. “But if I can’t get up on the patio, that’s no experience for me.”