Halifax is right to be excited about its new Green Network Plan | City | Halifax, Nova Scotia | THE COAST

“This actually gives us the ability to look at the whole picture before we make a choice,” says sustainable cities advocate Jenny Lugar.

The Halifax Green Network is not your average greenbelt plan.

Regional councillors enthusiastically and unanimously voted to approve the long-awaited plan this past Tuesday, to the delight of many supporters outside City Hall, conservationists and environmental advocates across HRM.

Jenny Lugar, the sustainable cities coordinator with the Ecology Action Centre and one of the leaders of the initiative in support of the “precedent-setting” Green Network Plan, says councillors are right to be excited.

“All the other places that have done a greenbelt, green network-style thing, they don’t necessarily have this level of in-depth information on the landscape, and certainly not in a regional sense.”

The Green Network Plan, in essence, is a comprehensive set of guidelines for the municipality to reference when making decisions that have to do with development, community design and urban planning as well as environmental integrity. It outlines ways that city hall can foster connectivity between parklands, green spaces and open spaces, as well as protect vulnerable ecosystems, landforms and wetlands.

The plan also requests amendments to HRM's Charter that will increase Halifax's legislative power, enabling the municipality to acquire environmental reserves through the regular subdivision and development processes.

Its passing will result in the municipality gaining more authority when it comes to preserving and protecting green spaces and will impact existing planning documents like the Regional Plan. For instance, the Regional Plan's Significant Habitats and Endangered Species map—which currently doesn't guide any policy decisions—will be replaced with the Green Network’s ecology map. 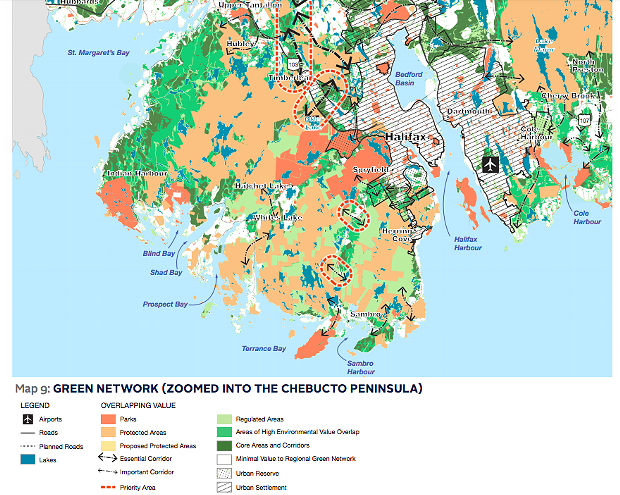 “That means that when councillors are making a decision about what to allow in certain areas, they are going to be able to look to that and say, ‘Well, that’s part of the Green Network, we really shouldn’t be messing around with that area because that could jeopardize other things and that could have a snowball effect,’” Lugar says.

The map of Halifax's new greenbelt isn't arbitrary. Instead of just identifying already known green spaces like parks and trails to “pop a greenbelt down on it,” the city hired consultants to “do some really in-depth scientific research on what the landscape actually looks like,” says Lugar. City hall also studied patterns in the region, such as rivers and lakes, underground water sources, wildlife, fire data and where old growth forests are.

“They took over 75 data sets and layered them overtop one another and that’s what the councillors are talking about, saying this is really exciting and revolutionary.”

Lugar notes that council’s agreement to publish the mapped data as open-source for the public will be helpful for communities across the region.

“People are going to be able to kind of zoom in to their own areas and figure out what’s on the Green Network and therefore, kind of be watchdogs,” she says. “It’s going to help communities band together and say, ‘We see a proposal for something that might be detrimental to the Green Network here and we want to fight against it.’” 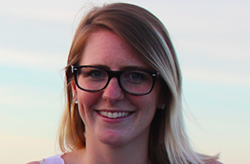 SUBMITTED
Jenny Lugar wraps up her work as the sustainable cities coordinator at the Ecology Action Centre this September, after which she'll be joining the planning team at WSP.
Lugar says that she hopes the excitement from council this past week will translate into budgetary changes that reflect the values of the Green Network Plan.

It will take time to reap all the benefits from these changes, however, there are some improvements that will be seen right away.

“The second a proposal comes in to alter any land, whether that be residential development or commercial development or any sort of application for altering the land in any way, that will be required to flag if it is on the Green Network,” says Lugar. “A lot of our decisions have been made on a one-off basis, and this actually gives us the ability to look at the whole picture before we make a choice.”