Halifax is dining together, at home to support Feed Nova Scotia

After getting laid off from a prestigious UK restaurant, Colin Bebbington quarantined, then got creative.

Colin Bebbington Instagram
Colin Bebbington got laid off from his culinary position at the prestigious Claridge's Hotel restaurant in London in the early days of the COVID pandemic.

Forced to return to his hometown of Halifax for mandatory 14-day isolation, Bebbington got to thinking about how to give back the only way he knows how—through food.

Bebbington called up his long-time friend Khaled Al-Nasrallah, who works in marketing, to team up on the project that has become Dine Together Halifax.

“He gave me a call and said 'this is what I’m thinking, I know how to cook the food, I need you to take care of anything else',” says Al-Nasrallah, who's co-founder of Dine Together along with Bebbington.

The two used their connections around Halifax to begin sourcing ingredients for meals and packaging for take-out and delivery. They also found a local kitchen that was sitting unused during the pandemic.

“As soon as Colin came home, he connected with McKelvie’s and they said this is a great idea, we’d love to be involved. We’ll give you the kitchen as long as we can,” says Al-Nasrallah.

Dine Together for Feed Nova Scotia started small, making 100 mac and cheese dishes for $12 each that first week. They sold out in less than a day.

For three weeks now, Bebbington has been churning out 1,000 meals a week, expanding to cook things like beef stroganoff, his mom’s egg rolls, and mushroom ragout.

Dine Together Halifax
“He’s obsessed with the Halifax food scene, he knows how important it is and how big it actually is, and I think we in Halifax underestimate just how prominent our food scene really is,” says Al-Nasrallah.

The co-founder says the meals feature Nova Scotian ingredients and farmers and other local businesses have helped reduce their food costs.

“As soon as we did the first week, we started getting Pete’s reaching out, Sysco reached out, and even local farmers. Rosebriar Maple Farm in Nova Scotia donated $400 worth of maple syrup last week,” Al-Nasrallah says.

Although there has been a rotation of local sous chefs who have helped Bebbington out in the kitchen, he’s doing most of the food prep—from boiling and cracking lobsters, to stewing vegetables and baking granola—by himself. 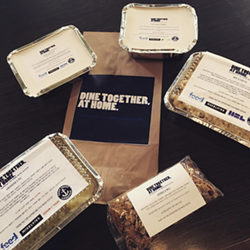 Dine Together Halifax
Chef Colin Bebbington has got your take-out fix, from mac n' cheese to beef stroganoff to vegan mushroom ragout.
But with his experience in world-class kitchens in Europe, Bebbington also likes to experiment: "If you just leave him be, the guy does some pretty crazy things,” Al-Nasrallah adds.

With everyone from the chef to delivery drivers working as volunteers, Dine Together has raised $15,000 over the past four weeks. The only money that doesn’t go to Feed Nova Scotia is the food costs.

On Monday, May 25, the team said they were both excited and disappointed to announce that this will be the last week of the fundraiser.

The menu will be released via their Instagram Tuesday, May 26th around 7:30 pm.

“We leave it up until everything gets sold, and then Sunday the deliveries and pick-ups happen,” says Al-Nasrallah.

ITS LIVE!! Our FINAL menu is finally here and we wanted to take the time to commemorate the last 4 weeks with a few of the highlights! This week we’ll be giving away 15 x $5 gift cards from @oddfellows_barbershop and a prize pack from @eastcoastlifestyle chosen at random from those that donate to the Phoenix Initiative & Follow East Coast Lifestyle / Oddfellows on Instagram. GO BEFORE IT ALL SELLS OUT! DineTogether.square.site