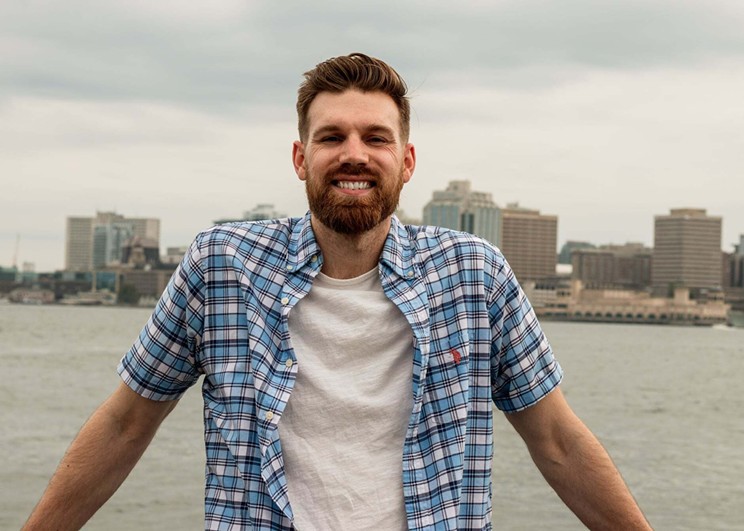 The Bachelorette
Bachelorette contestant Chris Gallant, 27, works as a content producer and public speaker in Halifax.

With two Canucks on season 18 of the ABC show, it’s a big year for hot Canadian men.

Local members of Bachelor nation have a special reason to be excited about the upcoming 18th season of The Bachelorette, and his name is Chris.

Due to premiere on October 19 according to dates released last week, the dating reality show will star Michelle Young, a 28-year-old teacher from Minnesota who was a contestant on season 25 of The Bachelor. She’s the show’s third Black lead after Rachel Lindsay’s season 13 and Tayshia Adams in season 16.

Get ready to fall in love with The Coast’s recaps of The Bachelorette: With Halifax hunk Chris G. among the guys wooing Michelle Young, there’s a local love interest the city can cheer for when the show starts Tuesday.

In the early morning hours of Monday, July 26, ABC dropped the names, ages and locations of Young’s 35 potential bachelors in a Facebook post. Among the men are two 27-year-old Canadians: Nayte Olukoya from Winnipeg, and Christopher G. of Halifax—who embodies the Halifax hipster with his auburn hair and beard.

When he’s not hanging out at rose ceremonies, Christopher G. is Chris Gallant, a content producer for Skills Canada, where he makes videos promoting skilled trades and technology careers among youth. Before that, according to his LinkedIn profile, Gallant worked as a promotions coordinator and lists himself as a public speaker.

Although his personal website has been taken offline, a look through cached pages shows Gallant discussing everything from his “spark” to his “grind” and his “epiphany” where he discovered spoken word. In this spoken word video from 2019, Gallant says “creating a passion isn’t all about romancing, it takes some personal financing.”

While his Instagram, Facebook and Twitter are all closed to public viewing—perhaps in anticipation of his becoming an international ambassador of hotness—Gallant’s LinkedIn reveals that he studied public relations at Mount Saint Vincent University from 2011 to 2017, and has been a volunteer soccer coach.

The Bachelorette’s upcoming season is set to begin filming in New Mexico at the end of July, so it’s too early to speculate on how far the Haligonian will make it in the show, or whether he and Young will form a real connection. But that won’t stop us from pointing out that if Gallant makes it to the final four, Haligonians may get the chance to see the city on the show as Gallant and Young head here for the “hometowns” episode.