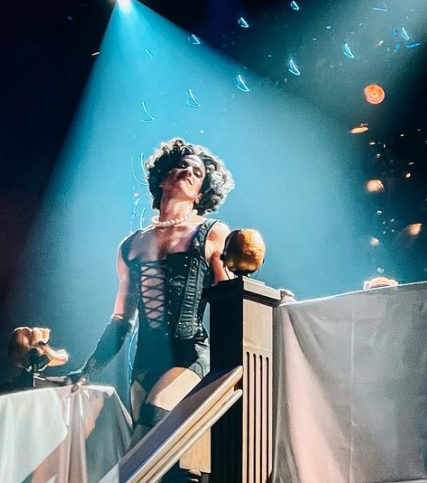 Ryan Brown
Allister MacDonald's performance in Rocky Horror is bound to be a career landmark for the award-winning actor.

An absolute landmark show is happening at the theatre until June 26—but it needs you to do your part.

The curtain for The Rocky Horror Show (Neptune Theatre’s latest production, its season-closing musical, on until June 26) is 7:30pm—or at least, that’s in theory. Usually, productions of the super-racy queer landmark start about an hour-ish earlier, as audience members begin filtering into the venue, dressed as their favourite characters and toting items that reference key moments of the West End musical—which, alongside its 1975 movie remake, is the textbook definition of cult classic. (A quick plot summary for the uninitiated: The play tells the story of a naive young couple, Janet and Scott, who lose their innocence while visiting the mansion of a transvestite scientist, after getting a flat tire.)

See, people don’t just watch Rocky Horror. If theatre’s loftiest ambition is a form of lightning-in-a-bottle communion between actor and audience (something that was confirmed by every single theatre artist I spoke to this pandemic—often in response to my asking what they missed most about the medium), then Rocky Horror is wool socks on carpet: Immediate, guaranteed electric shock for all parties involved.

Theatre Nova Scotia's 2022 Robert Merritt Awards, recapped: “ I never in my life thought I would win an award for a pantomime—and in fact, at one point, I never thought I'd be in one," best actor winner Allister MacDonald says.

It’s a shame, then, that the audience was all linoleum when I went. As my plus one and I loitered out front at Neptune on opening night, we expected wigs, bustiers, sky-high heels—at least, we figured we’d see some wide-woven fishnets. A couple show-goers were wearing Rocky Horror t-shirts and one or two had on textured tights that felt like a fishnet’s more respectable cousin. “Do you think that’s theme? Or fashion?” We’d ask each other, elbowing to get the other’s attention. It was too tame to tell, so we didn’t dare ask the three-to-five people we noticed.

The theatre itself, meanwhile, was dressed for the occasion. A sheer fabric as luminescent-ly rainbow as a gas puddle transformed the doors into portals. Inside, footage from creature features—of which Rocky Horror is equally inspired by and sending up—projected onstage pre-show. As the story progressed, deeper layers of stage and set were revealed, for a gobsmacking effect that showed Neptune has not only pulled out all the stops, but coated them in glitter. I have never seen another play in Halifax with such an extravagant environment. After a season of mostly minimal one-actor shows, the effect was even more dramatic.

And then there was Dr. Frank N. Furter, the play’s anti-hero. Allister MacDonald—fresh off a Merritt Award win for their last Neptune role, Alice In Pantoland’s Mad Hatter—explodes onstage in the sort of pulse-quickening performance that reminds you why you dragged yourself down to Argyle Street to begin with. (And makes you forget that MacDonald is up against Tim Curry’s historic take on the role.) In a deft mix of camp and exactitude, MacDonald manages not only to be the play’s beating heart, but bring a viscerally physical performance that effuses effortlessness.

Everyone lost their minds in the room whenever Furter did or said anything—as is easy to do when witnessing genius. But, when someone is working this hard to meet you half way, it’s really only manners to return the favour.

Rocky Horror’s lasting influence stems, in part, from its midnight movie origins—a part of cinema history from the 1970s that saw risque or counter-culture films shown at 12am to packed audiences looking for something very different than what the early show was offering. The movement’s roots trace to New York—and, arguably, to Andy Warhol’s filmography. It is defined by movies that are hilarious, horrifying, rife with sex—and by the audience’s participation. Seeing Rocky Horror, then, at any time of day, means taking on the role of an audience member that’s been rehearsed by crowds since its first release.

Neptune, to its credit, has clarified what works and what doesn’t by way of audience participation. The list of don’t is short: No food in the theatre or open flame, meaning the classic move of throwing rice and toast is out. (It also isn’t bringing virgins in the audience onstage for a mock sacrifice, as some productions do.) Cards, toilet paper and newspapers are still fair game (each of these items relates to a key prop or phrase in various scenes). People are encouraged to dress up as their favourite character and sport fishnets.

Another hallmark of the Rocky Horror experience is singing along—and yelling key lines at the cast. So, go ahead and make like the millions of audiences before you and yell at Janet that she’s a slut. It’s only manners.