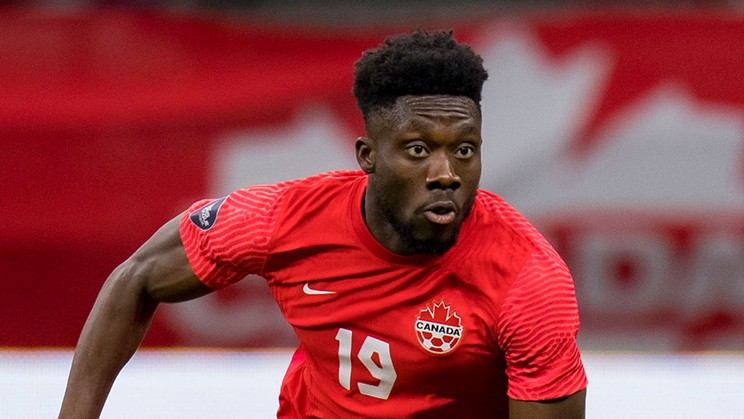 Your Halifax guide to the FIFA soccer World Cup

Where to watch it, who’s in it and why you should care.

When Canada’s men’s national team takes to the soccer pitch against Belgium on Wednesday, Nov. 23, it will make history—not just as the first Canadian men’s side since 1986 to qualify for the world’s largest sporting event, but as the fastest-climbing team in global FIFA rankings in 2021-22. Led by global star Alphonso Davies, a rising 22-year-old talent whose day job is playing for German professional team Bayern Munich, and coached by John Herdman, a firebrand from Northern England who oversaw the Canadian women’s team’s climb to perennial contenders, Les Rouges will enter the 2022 World Cup with the highest expectations they’ve ever faced.

The World Cup is nothing if not a spectacle. More than half of the world—literally—watched the 2018 tournament in Russia. And if you’re pub-crawling downtown in the next four weeks, you’re virtually assured to meet a multi-coloured medley of jerseyed hooligans hurling obscenities at a TV.

Nearly two-thirds of Coast readers who took our survey this week said they’d be tuning into the tournament—if not for the whole shebang, then at least for Canada’s matches.

Here at The Coast, we’ve got you covered with the Haligonian’s guide to keeping up with the World Cup—from the good to the ugly of the tournament, to where to watch it, to when Canada’s playing and everything you need to know to be smarter than your friends and family.

It’s been 36 years since Canada last qualified for the World Cup—a moment in our country’s soccer history that, believe it or not, happened on Atlantic soil. (Hat tip to George Pakos and the muddy King George V Field in St. John’s.)

Accomplishment aside, that 1986 team fizzled out of the global tournament without scoring a goal. That figures to change with this Canada squad. There’s a strong argument that our country’s soccer talent pool has never been deeper—nor has it boasted as much star power.

Davies is the team’s undisputed star (just watch these 80 seconds if you need a primer), but he’s far from the only member of The Reds turning heads at the sport’s highest level. Ottawa-raised striker Jonathan David is in the midst of a goal-scoring tear in France’s Ligue 1 and has been linked to transfers to European giants Real Madrid and Manchester United. At 22 years old, and with just 34 appearances for Canada, he’s already vaulted to second on Canada’s all-time scoring list. Meanwhile, Brampton-born Tajon Buchanan and Leamington’s Stephen Eustaquio have been making waves in Belgium and Portugal, respectively, at Club Brugge and FC Porto.

Are there any Scotian connections?

Not this time, but it was close. Port Williams’ Jacob Shaffelburg (who plays professionally for Major League Soccer’s Nashville SC) has made four appearances for Canada’s senior men’s team and was part of the group that helped Canada qualify for the Qatar World Cup—but alas, his name was left off Herdman’s final 26-player roster. (Those are the breaks when you share a position with Alphonso Davies.)

Former HFX Wanderers FC gaffer Stephen Hart coached the club to a Gold Cup semifinal in 2007. But Hart’s last involvement with the senior men’s side came in 2012.

If you’re looking to adopt an honourary Scotian this tournament, you could do worse than one whose name already sounds like he was born in New Glasgow or North Sydney: Defender Alistair Johnston. The 24-year-old only earned his first call-up to the senior men’s side in 2021, but he has become a back line fixture under Herdman’s watch. (Plus, the fact that he wore short sleeves in Canada’s infamous Iceteca match means he could handle a Halifax winter.)

What’s the controversy with Qatar hosting the tournament?

Where to start? Three former FIFA officials have been accused of accepting bribes in exchange for supporting Qatar’s hosting bid. Amnesty International ran a spotlight on the country's treatment of migrant workers in the lead-up to the tournament, accusing Qatar of subjecting workers to “forced labour” to prepare the World Cup venues, confiscating their passports and leaving them with “appalling living conditions” and salaries that, on occasion, “aren’t paid for several months.” A 2021 Guardian report found those very conditions had killed an estimated 6,500 labourers. And the country’s official World Cup ambassador has been widely denounced for homophobic comments after calling homosexuality “damage in the mind.”

None of this, if you’ve followed FIFA through the decades, is particularly shocking for the sporting organization. Corruption has been endemic in soccer’s governing body for years.

When is Canada playing?

Canada is guaranteed three opening round matches against its opponents in Group F: Wednesday, Nov. 23 against Belgium (3pm Atlantic time); Sunday, Nov. 27 against Croatia (noon AT); and Thursday, Dec. 1 against Morocco (11am).

If Canada finishes in the top half of its group, the men’s side will advance to the knockout stage of the tournament for the first time ever. From there on, every match is win-or-go-home.

Should I pick Canada in my World Cup pool?

Only if you like a dark horse. Oddsmakers have Canada (+20,000 odds, a massive longshot) as the 20th-most likely World Cup team to win it all, ahead of only 10 other nations and even with Wales and Morocco. If you’re looking for the surest pick, oddsmakers favour Brazil (+400) to win, followed by Argentina (+550) and France (+600).

But if you want the hipster pick, then sure, go with Canada. It’s more fun to cheer for an underdog anyway.

Where can I watch the games in Halifax?

HFX Wanderers FC is hosting a series of viewing parties at HFX Sports Bar & Grill (1721 Brunswick Street). Proceeds support United Way Halifax and Extra-Time Society, an arm’s length organization to the Wanderers that aims to “positively impact the community through sport.” Reservations include entry into draws for Wanderers tickets and signed merch.

🌊🍁Featuring a giant 235-inch screen, the best place in Halifax to watch all of Canada's matches is at our viewing parties @HFXSports 📺

Reserve your table in advance to beat the rush!

If you want to hang with the Halifax members of The Voyageurs, Canada’s unofficial soccer supporters group, they’ll be watching every match at Niche Lounge (1645 Granville Street).

You can also find the games at The Old Triangle (5136 Prince Street), The Brown Hound (1450 Ironstone Ln), The Maxwell’s Plum (1600 Grafton Street), Big Leagues (920 Cole Harbour Road), and… well, just about any bar or pub that carries TSN.