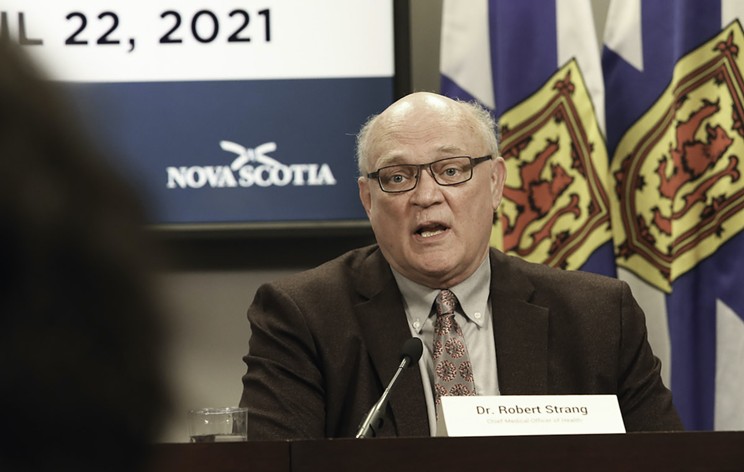 “I know this is not good news,” Strang said. “But restrictions are needed.” COMMUNICATIONS NOVA SCOTIA

Halifax goes back into lockdown to fight community spread

The third wave has arrived, bringing with it four weeks of restrictions.

here's community spread in Halifax Regional Municipality,” premier Iain Rankin said at a COVID-19 briefing Thursday afternoon with chief medical officer of health Robert Strang. Confirming that the recent surge of infections means COVID's third wave has hit Nova Scotia, Strankin announced a "circuit breaker" lockdown for HRM and surrounding areas that comes into effect Friday, April 23 at 8am. The lockdown is slated to last at least four weeks, until May 20 at the earliest.

38 new cases leading to 111 active cases April 22: It's been a year since Nova Scotia had so many new cases in one day.


Among the restrictions coming into effect tomorrow for Halifax: no more than five people can gather indoors or out; no sports, arts, social or special events; no practises, no rehearsals; spas, hair salons and barbers are closed; gyms, pools and yoga studios are closed; arcades, museums and galleries are closed; libraries are closed but can offer pick-up and drop-off services; restaurants are closed to eating in—this closure includes patios—but can do take-out.

The lockdown comes on top of the move to tighten Nova Scotia's borders to travellers, which came into effect this morning.

Unlike the first-wave lockdown a year ago, trails and beaches are still open, within the five-person gathering limit. And most schools are open for in-person learning (although Dartmouth, Cole Harbour and Auburn Drive high schools are among a bunch of schools in what the province calls "an area of increased COVID-19 activity" that will be closed for two weeks). Check the province's full list of closures and openings for details.

The province announced 38 new C19 infections today, the most Nova Scotia's had in a single day since April 2020, during the first wave. We now have 111 active cases, after several days of rising infection numbers that lead to today’s briefing—held a day earlier than usual—and emergency action.

But compared to this time last year when the province had 464 cases at the peak of the first wave, and even compared to early December 2020 when we had 142 active cases, we’re in a much better situation. “More testing usually means more cases identified, and that actually is good news,” Strang said. Nova Scotia is much better off than provinces like Ontario, which reported over 4,000 new cases Wednesday, Quebec (1,200 new cases) and Alberta (almost 1,700). Quebec and British Columbia have also detected the new double-mutated B1617 variant that originated in India.

But our perceived advantages are not reason to let our guard down in Nova Scotia, especially as cases climb. “After talking with my team about the cases they were investigating it is clear that strong measures at this time is an absolute necessity,” Strang said at the briefing.

“I know this is not good news,” he said. “But restrictions are needed.”

COVID cases, hospitalizations and news for Nova Scotia over the January 22-23 weekend

COVID cases, hospitalizations and news for Nova Scotia over the January 22-23 weekend