Circus that makes you question the nature of reality. Nascent comes from the the creators of TU Processed, which debuted in Halifax in 2016. Where Processed explored personal narratives on mental illness and race, Nascent is more metaphysical, delving into the creation of universes and the relationship between space and time. A cosmic spider dances frantically on an aerial rope. A bumbling clown wreaks large-scale havoc. Parasols whirl and storms rage. The atmosphere is dark, moody and immersive, but the narrative pokes fun at the absurdity of existence (who amongst us hasn’t failed to prevent the destruction of a universe because we were busy taking photos of a passing cat, am I right? #relatable).

The Halifax Music Co-op is an intimate setting for circus performance: the high ceilings allow the aerialists to show off their stuff as the audience gets an up-close view (sit front row-centre if you want to feel the breeze as performers swoop by).

The show warms up with two stand-alone pieces featuring tumbling and choreographed hooping set to live music, giving the audience a well-rounded taste of contemporary circus in Halifax. - Nicole Maunsell 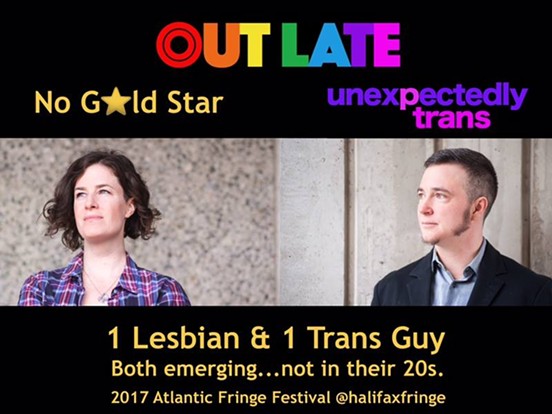 
Two pieces on the theme of coming out in mid-life.


A one-woman monologue complete with flip charts, No Gold Star is based on Alison Lynne Ward’s experience coming out as a lesbian while married to a man. Ward aptly conveys the cognitive dissonance familiar to many queer women who at one point firmly believed they were straight, despite thinking about sex with women all the time and having crushes on their friends. A few jokes fall flat (the Letterman-style top ten list didn’t do it for me), but ultimately Ward succeeds at being relatable while also intensely personal and unique. We see her genuine heartbreak as she grieves her marriage and who she could have been, and her simultaneous aching for the possibility of who she will become.


Prepare to get misty-eyed at Unexpectedly Trans, as Hanlon McGregor performs scenes inspired by his transition and coming out to himself and his family. His character, Dan, is trying to “make friends with the awkward” while navigating family life, hormones and public transit. Director, co-writer and supporting actor Mihaly Szabados artfully kaleidescopes between secondary characters—supportive partner, unsupportive former friend, thief in the midst of robbing a pharmacy—but really shines as Blair, Dan’s young daughter, whose touching relationship with her newly-dubbed Papa drives the narrative. Blair is resistant at first, but like many children has depths of understanding that far outstrip some of the adults in her life.


Both plays convey the significance of finding the language to describe who you are and the importance of sharing it with the world. - Nicole Maunsell