An article published by the comedy site was spoofed by Jacques Dubé in a text message sent to an employee. 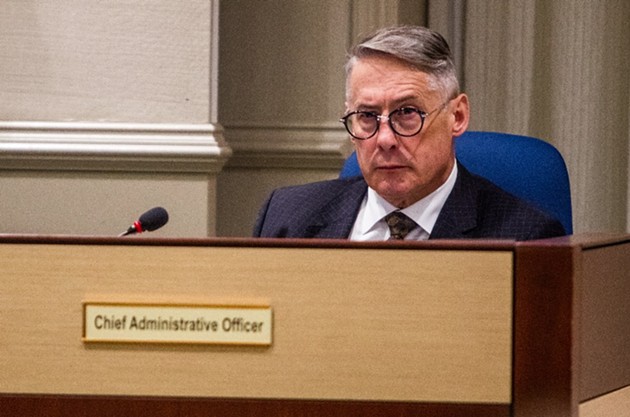 Sources with knowledge of the situation confirm a harassment complaint has been made against the CAO over a text message he sent two months ago to one of his employees.

The message includes a rewritten version of an article first published by parody news site The Beaverton in 2014, entitled “Nation wonders if who ‘loves winter’ also likes getting fucking choked to death.”

It describes the homicidal rage felt by snow-plagued parts of the country towards a winter-loving Canadian named “Jake Bryans.”

“I’m glad that he likes how quiet it gets when there’s new snow on the ground,” reads one quote, that's attributed to a personification of the city of Calgary.

“Do you know what else would make me glad? Killing him. Literally killing this son of a bitch with my hands.”

Dubé apparently replaced the names in the article with those of himself and an HRM manager. The revised story reads like the violent threats are being made by the employee towards the CAO.

The new draft was then sent to the employee via text message on the night before a massive blizzard shut down most of the city.

It's unclear what the context of the conversation was, or if the text included any reference to where the words originated. The Coast hasn't seen a copy of the but has had its contents confirmed by two people who viewed what was sent.

via The Beaverton
A cached version of the article is available here.
The recipient didn't find it very funny, that much is clear. The matter was serious enough for the employee to seek outside legal advice and file the complaint against the CAO.

It also caused Dubé to take a voluntary two-week absence from City Hall in early March, which city officials at the time would only say was due to a “personal issue.”

Regional council first heard about the problem as part of a closed-door meeting on March 9 to discuss an unspecified “personnel matter.” Councillors were provided copies of the text, with the recipient's name redacted. During the three-hour discussion that followed it was determined the fake news story didn't count as grounds for the CAO's dismissal.

Dubé was back at City Hall the following week. A requirement for his return apparently involved being interviewed by a doctor to ensure he had no propensity for violence.

The CAO didn’t respond to questions about the harassment complaint sent to him yesterday and today. He previously told The Coast back in March that his absence from City Hall was spent visiting friends out of the country, and spending time with family.

Murphy also refused to confirm whether any harassment complaints have been filed against any senior HRM employees in the last three months. “Given the narrow time frame” and small sample size, “sharing information publicly could the protection of privacy,” says the spokesperson.

Several city councillors contacted in the last two days strongly declined to comment about the issue, but sources speaking off-the-record have said the CAO still has the support of council.

Dubé only started working for HRM last September, after leaving his former job as Moncton’s city manager. He has a lengthy career in the political world—both regionally and federally—and at the time of his move was strongly praised by his former Hub City colleagues.