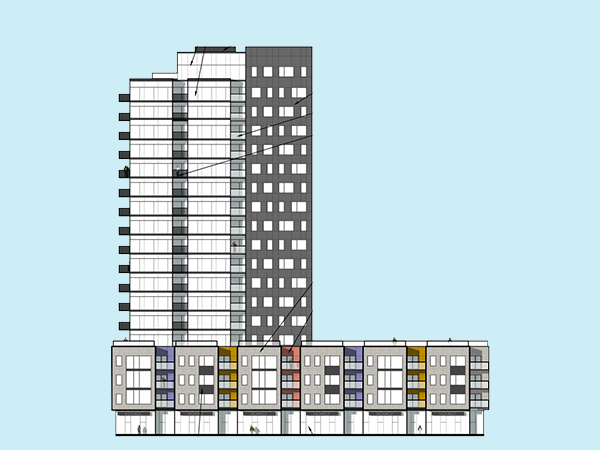 A s the Centre Plan looms in the somewhat near future, the city is moving quickly to get development applications caught in its crossfire settled before the big changes come about. Halifax and West Community Council voted one of those developments, a 19-storey building at 2859 Robie Street, between Bilby and Macara Streets, through to council on Tuesday.

The land owned by BANC Investments Inc. used to house a gas station but has sat empty for many years. As per the current approval process the development was scheduled for a public hearing at Tuesday's meeting. No one showed up.

Councillor Lindell Smith suggested an amendment based on emails he received from constituents who were unable to attend, asking that Macara and Bilby Streets only have three storeys of height for the street walls versus four. Cesar Saleh from WM Fares Architects, who is developing the property, defended the design, saying the four-storey streetfront will be "animating Robie Street." The planning advisory committee also recommended only three storeys of street wall, as well as adding incorporation of affordable housing into the proposal, which wasn't added.

Councillor Russell Walker protested Smith's amendment."If there were really a hue and cry here to change things you would have been here tonight, for the official public hearing," he says.

Low or no attendance at public hearings is one of the reasons Smith has pushed council to put in a social policy framework to consider why people may not be coming to public hearings or getting involved in planning processes and engagement. "The public hearing shouldn't be the be-all, end-all," says Smith. "Often folks in my neighbourhood, people are just, they're to the point where they don't feel that they're heard. So why come to the public hearing? Just because people don't show up doesn't mean that it's not important to them."

Smith's amendment was defeated. The initial motion, to approve the land use by-laws and the development plan, was approved.

Mason suggested the community council, which normally meets every month, plan to meet every other week pre-Centre Plan as many other developments in the area are coming down the pipe quickly: A proposed five-storey, 8,216-square-foot, 34-unit building from 2440 to 2454A Agricola Street where Obsolete Records is now; a 19,818-square-foot eight-storey residential building with 101 residential units on Wellington Street between South and Inglis; the 2165 Gottingen Street build is asking permission to add an extra storey to its four-storey building already under construction and more.