From World Junior controversy to Olympic gold to a Stanley Cup homecoming, 2022 brought a little bit of everything—just not much success on the soccer pitch.

If you were looking for an exclamation point for Halifax’s year in sports, you could do worse than Aug. 20, 2022. On a gorgeous summer day, if just for a moment, you could close your eyes and dream of a city of champions. Thousands gathered, cell phones outstretched, for a glimpse of the Stanley Cup. And for the second time in their Canadian Premier League season, the HFX Wanderers FC unseated defending champions Pacific FC.

It wasn’t all roses in 2022. There were losses. Playoff disappointments. Nationwide controversies. So much happened, it’s easy to forget we saw Halifax at another Olympic Games. (Remember Beijing?)

From the good to bad to historic, we break it all down in our Coast year-in-review.

Cole Harbour’s Nathan MacKinnon could do no wrong in 2022. The 27-year-old Colorado Avalanche centre won his first ever Stanley Cup—and did it while unseating a back-to-back champion Tampa Bay Lightning team with future Hockey Hall of Famers Steven Stamkos and Victor Hedman. (No, this writer doesn’t care for your “what about Corey Perry” arguments.)

MacKinnon’s trophy case is getting crowded at this point: He brought Halifax a Memorial Cup championship with the Mooseheads in 2013 (while taking home the tournament’s MVP award), picked up the NHL’s rookie trophy in 2014, won IIHF World Championship gold with Canada in 2015, earned the league’s sportsmanship award in 2020 and now has a Stanley Cup to his name.

He also signed the richest contract in NHL history in September, inking an eight-year extension with the Avs worth $100.8 million. That’s enough money to buy a women’s soccer team and bring it to Halifax if he wanted. Or afford tickets to a Taylor Swift concert.

In true Halifax fashion, Nate brought the Stanley Cup to the Grand Parade on his day with the trophy and rode past Citadel Hill in a fire truck as a bagpipe band led the way. He also brought the trophy to the IWK children’s hospital—and then made a short trip over to the Wanderers Grounds to keep the party going.

Speaking of the Wanderers, it’s telling that MacKinnon’s day with the hockey trophy was among the highpoints of the Canadian Premier League soccer club’s fourth season. The Wanderers finished with an 8-5-15 win-loss-tie record in league action in 2022, falling short of the final playoff spot by 17 points. (That’s, uh, not great, if you were wondering.) For the second year running, the Halifax-based club also scored the fewest goals (24) of any CPL team.

That prompted the end of founding head coach Stephen Hart’s tenure, who joined the club in 2018. The club fired him in mid-October, four days after the Wanderers’ final game of the season. (They lost, 1-0.)

“We haven’t had the success we want to have on the pitch,” club founder and president Derek Martin told The Coast in October.

To hear diehard fan James Covey tell it, the Wanderers’ 2022 season “went off the rails very, very early.” Star striker and reigning league Player of the Year João Morelli tore his ACL in the club’s second game of the season and missed the rest of the year.

“No one saw that coming,” says Covey, speaking by phone with The Coast. “And it was a season of trying to figure out how to cope with that. Sometimes, the team did a good job of that, and other times, not.” 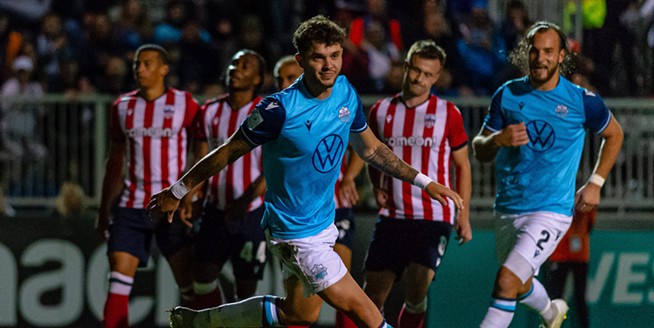 There were highs, to be fair. The Wanderers challenged (and at times, even outplayed) a Toronto FC side fielding most of its regular starters—and a significantly higher payroll from playing in the top tier of pro soccer in Canada and the US—in front of a sold-out Halifax crowd in the Canadian Championship quarterfinals. (Toronto captain Michael Bradley’s salary of US$1.5 million is more than double the Wanderers’ entire roster.) The Wanderers managed to carry a 1-1 draw into the 86th minute before conceding an own goal.

“The performance of the players, almost every one of them, was fantastic,” Hart told reporters post-match. “Excellent first half, very balanced, very composed, and except for a few minutes in the opening of the second half we brought ourselves right back into the game.”

The Wanderers also managed to thump defending CPL champions Pacific FC 3-0 on the road in June. Halifax’s newly-announced head coach, Patrice Gheisar, will hope for more of that as he takes the reins of the club in 2023.

Who’s in next season?

Who’s out next season?

The Wanderers are still in discussions with forward Ryan Robinson and defender Gabriel Escobar.

The Halifax Mooseheads finished a decent-but-forgettable 2021-22 season with a 38-28-2 record, good for fifth in the QMJHL’s Eastern Conference and eighth overall in the top ranks of junior Canadian hockey east of Ontario. Under first-year head coach Sylvain Favreau, the Mooseheads managed to exorcize the ghosts of two straight losing seasons and missed playoff appearances. But the Mooseheads’ playoff return landed with a thud. (Or a croak. Whatever sound a moose makes.)

Photo: Halifax Mooseheads
The Mooseheads fell to Acadie-Bathurst in heartbreaking fashion in the 2022 QMJHL playoffs.

It started with promise. Up against the Acadie-Bathurst Titan in the first-round, five-game playoff series, the Mooseheads surged ahead to a 2-0 series lead and seemed poised for a sweep. But in Game 3, in front of their home crowd at Scotiabank Centre, the Mooseheads coughed up an 8-1 loss to keep the Titan’s playoff hopes alive. Favreau’s Mooseheads followed that with a 4-3 triple overtime loss—again on home ice. The final dagger came two days later in Bathurst, when the Titan toppled the Herd 2-1 in the fifth game to take the series.

If there was hope to be found in 2022, it came in the form of right winger Jordan Dumais. The Île-Bizard-born Dumais finished third in scoring in the QMJHL in 2021-22, pouring in 39 goals and 70 assists in 68 games. He was also named CHL Sportsman Player of the Year. That was enough to woo the Columbus Blue Jackets, who drafted him 96th overall in the NHL draft in July. Teammate Jake Furlong joined Dumais in getting drafted, going 140th overall to the San Jose Sharks.

Lindell Wigginton became the highest-scoring Haligonian in NBA history in 2022 when he poured in a career-high 18 points for the Milwaukee Bucks against the Cleveland Cavaliers on Apr. 10.

Wigginton has spent most of his 2022 with the Bucks’ G-League affiliate, the Wisconsin Herd, where he’s averaging 16.5 points per game. Bedford’s Nate Darling has been pouring in buckets for the G League’s Ontario Clippers, averaging 19.6 points per game.

Dalhousie alum Mike Evelyn competed for Canada in both the two-man and four-man bobsled events, finishing 7th and 9th overall.

Much ado about World Juniors

The issue of what to do with the World Juniors men’s hockey championship became a hot-button one for both the HRM and Nova Scotia’s government in October. A spate of sexual assault and coverup allegations—the details of which are still coming to light—has plagued the sport’s national governing body and its former junior players in recent months.

Should Halifax host the World Juniors in wake of Hockey Canada’s scandal?: The Coast’s readers weigh in

As many as 14 past Canadian junior national team members—each unnamed—are accused of committing alleged assaults at both the 2018 World Juniors in London, Ont., and the 2003 World Juniors in Halifax. Hockey Canada was found not only to have kept a hush fund to settle claims, but also to have filled that fund with revenue from minor hockey registration fees.

That prompted Hockey Nova Scotia’s board to share that it had “lost its confidence” in Hockey Canada’s senior leadership. Nova Scotia premier Tim Houston wrote in an Oct. 6 statement that before the World Juniors went ahead as planned, “we need to see some meaningful changes that respect the concerns of Nova Scotians and Canadians.”

Ultimately, both the province and regional council opted to continue supporting the tournament, running in Halifax and Moncton from Dec. 26 to Jan. 5, 2023. But this year, things will be different: Hockey Canada says all players and coaches will be required to undergo sexual violence and consent training.