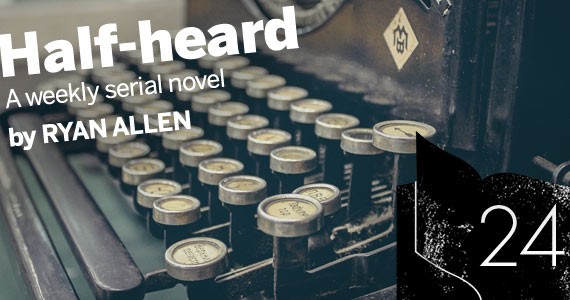 Sarah revealed that she saw three small tied-off latex baggies of who-knows-what fall out of the backside of Gertraud's pajama shorts, and Myles' eyes forwardly displaced themselves a comically gruesome distance out of his sockets, so far out in fact that Sarah would later tell friends that she had only seen that kind of eye-pop on Looney Tunes cartoons and that movie Cool World.

"And another fell out, a second clump of something, that I was still pretty sure was a dollop of turd, which hit her heel and flew across the room like a hackysack with its own agenda. I thought, oh shit, this is bad, we're going to have to buy whatever disgusting piece of antique furniture this bean-bun lands on. We'd have to live with the knowledge that this piece of furniture was stained with shit, we'd just have to throw it out and it'd be a total waste of money.

"But then it landed in this antique little teacup that was sitting on a saucer and rattled it off-balance for half a second before coming to a full rest. The shopkeeper didn't seem to notice, thank god," she paused, not noticing Myles wearing a shock-induced shellac of sweat over his body from hearing the craziest story he had ever heard, and was only listening even closer (because, as a genuine good listener understands, the maximum level of attention provided to the speaker of interest comes from understanding that being invited into another person's private territorial bubble is a privilege you should not mess up).

As the sun ticked west and the bell-clear sky was scrubbed with a sticky adhering air, Sarah continued to broadcast her acute recall of the previous evening to Myles. He was so totally rapt with the triple-layer tale of drug abuse, drug-gerbilling and public shitting that he did not take note of the landmark fact that this would be the longest conversation he had ever had in his life with a person who wasn't going to give him a folio of self-assessment homework and a conciliatory granting of level-4 access to the jars of Werther's Original candies by the office exit. For 15 years, he lived a life of quiet observation, spending days wondering about the idiosyncrasies of other people, or dressing up movie characters in his own daydreams built upon information culled from other movie characters. He'd wash every dish mirror-clear immediately after dirtying, turn off every light upon leaving a room and tip-toe silently from one quiet activity to the next leaving no trace evidence of himself, and he'd crawl into his bed at night and think to himself that if anyone checked, it would be as if Myles had put a halt his existence that day, and hadn't once left his bed at all.

"Was she just hiding them in her waistband, like safe keepings, or do you think they were shoved—"

"Well, there's no point in delving into the depths of her—" "Large intestine." "Ha, you're a quick kid," she gestured slightly with her cigarette. "What do you do when a friend is in that bad of a place? Do I approach her and risk offending her?"

She said she thought Trevor might be the one who had given her the bags, who doled out illicits and gave the roommates a discounted rate on stuff. "He once tried to give Leland six grams of Operation Eagle Claw to cover what he owed for rent money."

"Woah, did it work?" asked Myles, referring to the trade.

"The grass was as potent as the actual operation itself was a success," laughing to herself. "I don't think it could've gotten a cat high."

"Oh." Myles pretended to go along with it.

Sarah told him that she could have gotten it from Alex Stuart too, who has been known to indulge and often had a surfeit of funds to dip into thanks to his philanthrocapitalist parents out in St. Marg's Bay. "Regardless where she got it from, its not like she was forced. It isn't anyone's fault but her own. I don't know if I'm going to say or do anything about it, I just needed to tell someone, I guess. But maybe it is bad. Maybe you shouldn't do any drug that comes with it so much shame and secrecy even amongst collegiate bums like us. Maybe I should tell the others about it, or at least talk to Gertraud about it."

Myles, mildly shell-shocked from the story of drug-hoarding, wondered what all this was meaning, and was beginning to distinguish the roommates from one another. But for what? There were only more questions now. Did knowing this vague piece of information about Gertraud make his picture of her any more detailed, or just more mottled and confused?

She brightened like she remembered something. "Oh yeah, and think your mom will be cool with us having a party next door at our place on Friday?"