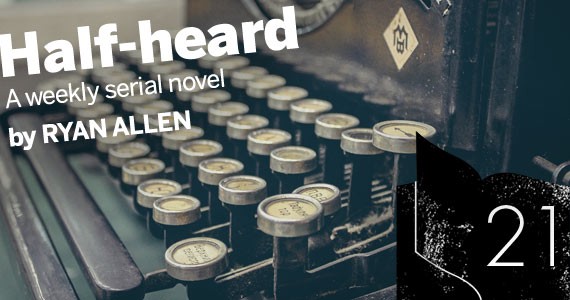 Myles and Northwood's stoops were probably 10 feet apart at the most, and though the stoops were about to function as spots for incidental social encounters in citified environments, just the sheer notion of Myles making small-talk with Sarah—this paragon of coolness who just now came outside and sat down with a pack of smokes—terrified him to the point where he probably couldn't get a word out or get up and leave if he tried.

She sat staring blankly, her field of vision blurred by whatever mental images were flashing in her head. She lit her cigarette and exhaled upwards in a large sigh that seemed to assuage whatever was getting at her.

What Myles knew from the radiator audio and closet doors was that Sarah was generally a level-headed, maternalistic sort of housemate. She rested her elbow on her knee and sat chin-in-hand staring into concrete with a forlorn glare and clumps of stress-blotches all over her face. She sat listening to the no-sound of the breeze breathing past the quickly-drying leaves on the trees above and continued staring.

After the first minute of their respective halves of the silence on the sidewalks stoops, Myles gulped, and with the subtlety of someone opening a beer can in a crowded theatre, turned his head to right. Not having breathed in what felt like an eternity, he let out a huge daydreamer's kind of exhalation through his nose that came out like the most forced "hmmmmm" under the sun.  He immediately crinkled up his noise in disgust, turned red and coughed a little. He not-so-conspicuously glanced at something else in his line of vision that Sarah just so happened to be in the way of.

Sarah looked over, only noticing Myles now with a perturbed look on her face that Myles could tell—though he was looking past her and not at her, of—had to do with what was on her mind and not so much Myles.

It all came crashing down when she drew another deep breath. Myles prematurely jumped at it, practically shooting out, "What was that?" Sarah looked back over at Myles and calmly asked, "I'm sorry?" "Oh, I thought you said something."Sarah smiled politely and turned back to the street.

Myles mouthed a big "woah" at his misstep and went back to fidgeting on his stoop. He kept (in-)discreetly looking toward Sarah. He looked her up and down, fascinated by her slumped shoulders and placidity. He started to try to mimic her body's state of seated repose. Putting his chin in his hands, making sure his elbows didn't slip off knees. Hand in his pocket. Cigaretteless-hand in front of his mouth, calmly swatting a fly that wasn't there, chucking an invisible pebble onto the curb, mashing the buttons on his Mom's cordless phone he had by his side in case one of Mom's backgammon partners called while she was out shopping, looking over, studying, mimicking, running his arachnodactylic fingers through his short, cropped...

"What are you doing?" Sarah asked, amused.

On Bloomfield's sidewalk, three young boys had another chubby moon-faced friend down on the ground with a small convex lens over his stomach. They were trying to concentrate the August sun's rays to a fine point on the boy's chest where a single curled hair stood and waved freely over the infertile flesh-scape of his gut. They were all chuckling slack-jawed and gave off that child-sadist vibe that you see in kids who treat landfills like playgrounds and have dogs with names like Nitro or Slayer. And to further expel the scene from any acceptable standard of humanity, there was a dog involved. Nitro's snout was eyeball-deep into the clothed backside of the seemingly unaware firestarter as he hyuck-hyucked and knelt over his mini-masochist with the curly-fried pube.

Myles looked past Sarah for a moment and saw what he had been pretending to stare at for the last minute. "Holy!"

He blushed and half-smiled trying to collect himself, "Not that. At, at the—"

Sarah let it go and laughed. "Your mom works for the cleaning company downtown, right? Seabreeze?"

"Yeah, well, she manages the cleaners. She's not a janitor, per se," he said defensively.

"Either way, just asking," Sarah said, and went back to her deep cerebration.

Myles, chest against his knees now, rubbing his arms together and asked, "How is it going?" as if all he was doing was exercising some kind of neighbourly friendliness and not really desperately wanting to the mechanics of every little constituent of "it" and how all of them were "going."

It seemed like an innocent enough question, Myles thought.