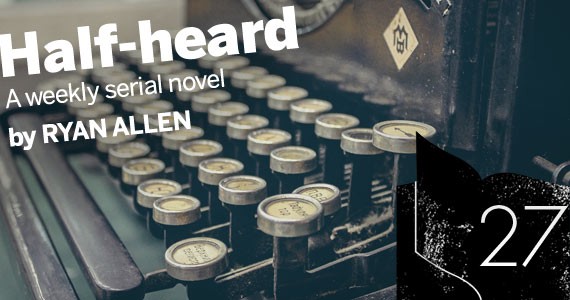 For whatever reason, unemployment was the norm for the roommates during the academic off-season in Halifax. Perhaps it was the exhaust-rich air that attenuated the constitutions of the student class, turning them to slugs seeking society's shade, or an entitlement created by creditors and entertainment industry's subjects with lives full of upper-urban decadence, constantly entrenched in fantastic interpersonal drama with no mention of power bills or car payments.

Whether they were extending the remnants of the previous semester's student loan, calling the 1-800 numbers on the backs of cereal boxes to complain about insects in their Cinnamon C.T. to receive surfeits of coupons, or relying on their parents' substantial rotisserie of credit cards, they all seemed to get by without having to answer to any overseeing honcho yet, excluding their misguided landlord.

No one seemed to have any place to be they hadn't personally assigned to themselves. It was a collision of previous generation's Calvinist guilt to always be busy and the current generation's collective exemption from living any less than the way they wanted. Work hard, but for yourself.

These days, no one could admit to just relaxing or being aimless and lazy. They had to make it seem like they were always headed to some definite endpoint. Leland really had to finish this episode, Sarah had to go for this bike ride, Will was going to feel fulfilled after successfully making time for three friends today, on Alex's smartphone "bath," "lunch" and "internet" were all scheduled activities. Trevor wasn't going to worry about sitting around all day, because he had penciled himself in for an evening lake trip.

So is the common case they could be busy for days, assigning importance to tasks that held no importance whatsoever, only to provide them with illusory obligations. Which is why Thursday afternoon was as good of a time as any for Sarah to knock on Gertaud's door.

Sarah walked into Gertaud's room with the intention of speaking to her about whatever it was she thought she saw on Tuesday evening in the Hydrostone. She started second-guessing herself by this point, thinking maybe what she saw fall from Gertraud's shorts was something not so egregious.

"Just writing my next move for Simon. CCL rules and regulations state we only have three days to postmark our next move and send it off to our opponent. It makes for a slow-advancing match, but it's fun. Takes me back to more antiquated times."

Gertraud sort of blankly crumpled the middle of her face. "Yeah, I was thinking dial-up internet, but sure."

Simon was Gertaud's nursing home-ridden Correspondence Checkers partner. The Correspondence Checkers League was set up by a local not-for-profit whose central focus was broadening seniors' options for activities while still keeping their limitations and restrictions in mind. The CCL allowed the elderly to connect with the outside world when day-trips and visiting friends and family was difficult or not an existing option.

"It's really nice of you to take time out of your day to do this with Simon," Sarah said.

"Well," Gertraud said, marking her 6-10 move on her piece of paper, "It's not much for me, but I know it makes a big difference for him." With the opportunity to play with a stationary senior from any of the participating nursing homes in the country, Gertraud was randomly paired with Simon, a 94 year old decorated veteran.

"Ever think of visiting Simon, maybe? Playing checkers in person? Sitting at a table with him?" Sarah asked, trying not to sound condescending. Simon, the randomly selected partner, lived several blocks from Gertraud at a quaint home on Windsor Street.

"Definitely not," sealing up her the manila envelope with a lick. "Those places give me the creeps. All those sunken eyes, liver spots, mouth-breathing, all of them looking slack-jawed at nothing in particular like they're seeing some deceased-roommate-turned-wraith, that urine-soaked bed sheet smell—it smells like boiled Windex, you know? Pee."

"I guess it is a little too much to ask."

Sarah readjusted herself as she leaned on the frame of her doorway, trying to look as if she was just going to casually bring up the matter like it suddenly came to her mind. "Hey, can we talk about something?"

"Sure, just one second. I'm going to run to the mailbox on the corner to drop this off. Come with?"

They exited the upstairs and Gertraud's aura of steely selflessness followed, forgetting her postage stamp on her desk.

An advent calendar of poetry: December 19