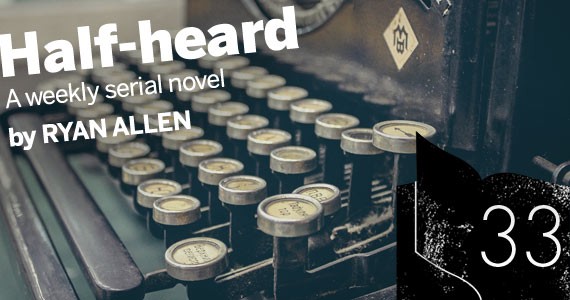 Outside under the sickly pale August moon that barely hung over the opening of the canopy of sidewalk trees, soundtracked by the far-away threnody of a disorganized quartet's unintentionally sad rendition of Hoople/Bowie's "All The Young Dudes," were now 80 irrevocably intoxicated party-persons gathered around a full-fledged street-brawl between two guys that held David and Goliath-like parallels in terms of physical proportions.

Myles took another sip of beer, which he was still referring to as "doing beer." (This was the first drink he had ever had in his life.) He wriggled himself through the rustling hedgerows of part-time punks and hipsters to find Will and Trevor at the centre of the swelling scene.

Trevor's left eyeball was jiggling around in its socket like a cartoon. His nostrils were flared and all the elements of his face sucked toward the centre in the way that cokers' or pillheads' faces do, giving a rodent aspect to their whole look. He's noticeably pale and over-partied in the soft streetlights, but with the Hoople blaring through the front door he just looks like a harbour boardwalk busker in the tailspin of his career. He has his fists out in front of his face and he is to-and-fro-ing in a butterfly-to-bumblebee fashion while Will stands there with his fists down, trying to establish eye contact with Trevor to maybe have a word with him. He doesn't look confused and angry, he just has his arms out screaming to Trevor that he's sorry and for him to calm down just a little so they can talk. Trevor keeps trying to take a swing at Will, and falling into the bordering hedges of people holding Faxes and cigarettes with every botched jab.

Inside Welnot is looking across the room at Alex and feeling very, very conflicted about everything and thinking that maybe he'll go over and make some small talk with him once the freespirit hula-hoopers wrap up their routine by the hallway. Meanwhile, Trevor is still circling Will now, trying to find a moment to exact a flying squirrel-style pounce onto his back. He's talking to Will too, but mostly independent of whatever dialogue Will is trying to generate between them. Mostly swear words or Travis Bickle-sounding lines.

Myles sees Sarah a few people away from him in the throng of bystanders and looks at her like what-the-fuck, she shakes her head at him in an I-give-up kind of way. She looks back at Trevor, who is trying to keep his arms over Will's shoulders from behind, legs flailing in the air.

"My appraisal of the sitch is something like this," she says, leaning into Myles. "Earlier, I think I saw Will digging around some pockets rifling for some kush, and pulled some out of the pile and that was that. But it was probably Trevor's, since Trevor's mad as hell and obviously on enough Bolivian marching powder to flatten a horse."

"But I thought maybe Will would be fighting Trevor over—" Myles stopped himself.

The multivalence of these people's relationships was baffling to him. He hadn't anticipated this strange kind of turnaround. The contradictions and variances were all the more apparent up-close. He thought about the Eye documentary he watched on refractive errors. He did some more of his beer can. From where he stood Will looked kind of chubby rather than muscley. Wasn't Trevor's crush on Leland going to come to some climactic apex tonight? Instinctively he grabbed an unattended Faxe and downed it before 15 years of being told not to drink something you found on the ground could sink in.

Trevor's very quick on his feet and now just hopping back and forth theatrically like a fighter in solo training, and all the while Will is not advancing or retreating on Trev in the slightest. It's obvious to everyone that Trevor's blown off too much and is soaring off the edge but everyone wants to keep watching. Inside the house Sarah's own private version of hell is playing out right by the kitchen, and the falsely advertised Mott The Hoople cover band is playing a version of Wild Cherry's "Play That Funky Music" that's even more anemic than the original. Will is saying, "Trevor, just stop, just come on, look—" Sarah and Leland are standing there sans the same gasping-in- horror-feeling as everyone else, wondering how much longer this will go on.

Before Trevor finishes ripping the collar of Will's henley he's already falling towards the ground from an effortless and reflexive mechanical blow from Will to his whiskery chin.