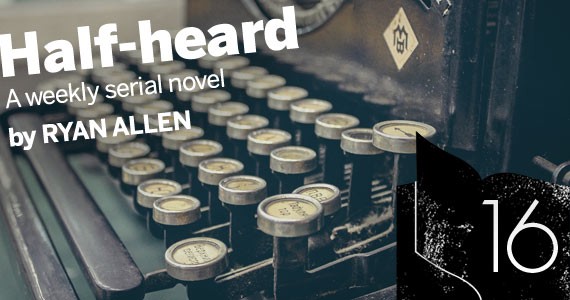 Now in on Young Street, in the Hydrostone Market area—this quaint strip of shops and restaurants, all architecturally similar with this splendid example of English-style garden suburb sort of vibe to it all—Sarah and Gertraud arrive at the first spot that doesn't seem crowded. The cart comes to the most awkward and anticlimactic slowing-down-to-a-halt sort of stop ever, in front of Seigmund's Miscellaneous Objects and Ornaments of Little Value shop of trinkets beside Salvatore's Pizza and Trattoria at a rumbling pace. Sarah, still in control of the situation and very much still aware of Gert's (Need To) Shit, jumps off the back of the cart, teetering on her feet like her centre of gravity was rattled out from under her shirt somewhere over the last three blocks, barking in this abnormal, lacerated voice that she's got her, while Gert hyperventilates, saying half-words through shallow breaths, her hair strung across her sick face in thick, slimy locks.

Sarah drags her from out of the cart like a corpse, Gert's legs get caught in the cart and she keeps pulling her, tipping the cart over and dragging it sideways, scraping it against the sidewalk until it jams itself into the entrance door and her leg breaks free. Then Sarah, with Gert under her arm like a bundle of wood, stops at the counter and demands to use the facilities ASAP, enjoining the person behind the counter—who is clad in more scarves, bangles and furry little animal paw necklaces than they can really register at the time—that no, they are not interested in any of their items and have nothing to sell, but regardless of whether or not that makes them loiterers, her roommate—no, her friend—Gertraud, is in dire need of a washroom immediately and that it would be in the best interest of their little junk-hut if they let her do what she has to do pronto, or else they'll have to deal with a steaming surfeit of human excreta all over their laminate flooring that no one will ever be able to fully recover from. All the while, Gertraud mumbles what sounds like some shambolic mantra in reverse over and over.

Somewhere between Sarah throwing bottles out of the cart onto Isleville Street and throwing Gert into the direction of the bathroom where she sat on a self-made geyser of noxious vapours, a sense of camaraderie developed between the two of them that they'd never felt in the last 11-and-a-half months of of being roommates. Sarah wound up identifying and really feeling for Gert—she wasn't this impenetrable, super-intimidating mannerless jerk she thought she was. She wound up wanting to help her. Because empathic concern and empathy itself aren't automatic settings, they require one recognizes there are other lives just as entrenched in awful stuff as their own. When you start thinking that way, people take on more dimensions than you can really handle or pack into a neat box. She wound up seeing beyond what Myles himself had mostly heard from her and all the roommates—flat, wafer-thin representations of the people of substance that they were. And that they all from time to time thought they were alone in being, which is a condition we all find ourselves in when we aren't actively thinking about how we shouldn't be. It was also all Welnot really saw of anyone right now too, and was making him more and more unreasonable every day.

To Myles and Welnot alike it was as if these people were supporting characters in the story of their lives. For Welnot it was easier to make sense of everything if he reduced everyone to some one-dimensional version of a person, or some composite of the characters he had seen on sitcoms. People that possessed only some small, digestible facet of his beautifully complex self.

Myles, though, knew there was more to these roommates, but did not know how to access it. He wanted to know these people like someone knows their friends or lovers, but he only ever heard the choice bits. He only remembered the clear, funny, quick and quirky moments. The ones that made sense, the ones with the one-two-punch formula, the witty back-and-forth, the stuff that made sense if you were just tuning in from another television broadcast. He wanted to know all the parts of these characters in this house inside and out.