spewing blood and fluids since 1984 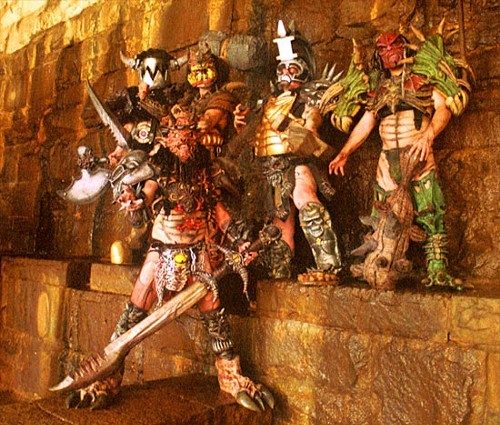 The rumors are correct - GWAR is returning to Halifax for the Pop Explosion. The "intergalatic snuff-rockers" are embarking on a "Bloody Tour of Horror" to promote their latest album, "Bloody Pit of Horror" - natch. Apparently their tour schedule is quite punishing, considering these dudes have been "on Earth" for about 25 years. But according to frontman/monster-thing Oderus Urungus, the band has only become, uh, riper with age. "Nothing less than the utmost display of blatant aggression will suffice to appease the lust of our fans, especially in this, our extra violent 25th Anniversary," he says in a press release. "It is patently unfair to compare our exploits with that of other bands...they are, after all, only human..." Oh yeah. They play Halifax October 20th at the New Palace, which is a prospect that makes me shudder gleefully with its awful, beautiful potential. They'll be joined by Casualties, Infernaeon and Mobile Deathcamp. Can't wait to see that first onstage autopsy. Tickets will go on sale Friday August 20th through Sonic Concerts.