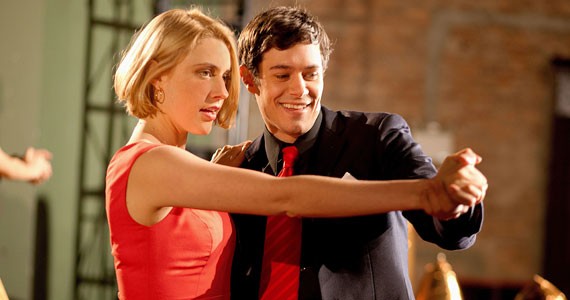 The future of American acting yawns. "Sorry," she says, embarrassed. "I have film festival rundown."

Greta Gerwig is 28 and has almost as many acting credits. You may have seen her in studio fare like No Strings Attached or Arthur, or Noah Baumbach's Greenberg, stealing the movie from Ben Stiller. But she emerged from a group of young American filmmakers---Joe Swanberg, Andrew Bujalski, Aaron Katz and Jay and Mark Duplass---who cranked out microbudget indies featuring post-college grads talking about their feelings, often improvised and shot in available light on consumer-grade DV. The passel of films was dubbed "mumblecore" by The Village Voice.

"It's not the term I would've chosen to describe these films," says Gerwig in a hotel during the Toronto film festival, where she's doing press for Whit Stillman's Damsels in Distress. "But I think the truth is when things get a name, especially some sort of artistic thrust gets a name---I won't call it a movement---it's good because it allows people to write about them and think about them as a group. Which is frustrating for the filmmakers because of course they're all individuals and they have their own tip and their own things that they're interested in but as long as you keep making things, the differences between people will emerge over time. You don't have to try to convince people you're different. People will know."

People know all about Gerwig now, as she ascends her scrappy roots past the Independent Spirit Awards and into the mainstream. Her naturalistic performances---practically anti-Method in their apparent lack of discipline--- are disarming and fascinating, magnetic even when they're uncomfortable.

But what Gerwig is known for is nowhere on display in Damsels in Distress, a comedy in which she stars as Violet, the prim and humourless leader of a group of college girls preaching refinement and chastity---Tracy Flick with a softer jaw. Violet's got rules about everything---boys, drinking, dancing, community service. The language is precise, the clothing generic, the credits font a lovely script.

"It does definitely take place now, but the characters are at home in a different time, especially mine," says Gerwig, who tap-danced at her audition and watched Grace Kelly films to prepare. "It's very nostalgic and out of touch and not participating in the world as it exists today. It's literally a break with the world---she's trying to create her own bubble."

The same could be said of Whit Stillman, who hasn't made a movie since 1998's The Last Days of Disco, after helming film snob favourites Metropolitan and Barcelona. His worlds are stylized, wry, upper crust.

"I would have done anything with him, I would've done any part, but he hadn't made films in a really long time," says Gerwig. "And I'd actually put together a list of dream directors that I wanted to work with, and Whit was on that list. My agent called me and said, 'You'll never guess who has a script.'"

This summer, Gerwig appears in Woody Allen's To Rome with Love and the indie rom-com Lola Versus and is currently filming The Corrections. Even though she's gotten to a place where she could just act, in between projects she wrote, directed and starred in a feature due out next year.

"My whole life I've had too many things going on," she says. "I like to think of myself as a renaissance woman."