Festival heats up with humour and song. 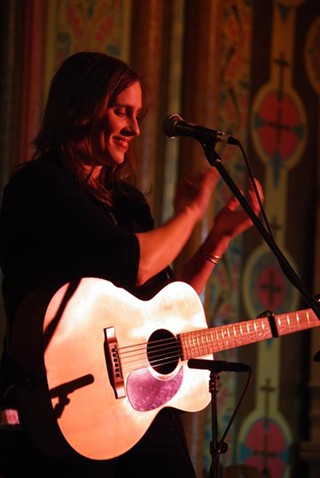 Rose Cousins is a heartbreaker In the Dead of Winter may be in its fifth year, but it hasn’t strayed far from the original vision once held in the legendary Khyber Club. As a Halifax-based festival, IDOW’s mission is to showcase up and coming local artists. Natasha Peach is merely one of the many songwriters featured this year.

With her shoes off and black and white stripped socks on, Peach might have been getting over a cold but she hardly missed a note at her Company House performance.

Tori Amos-esque in moments, Peach is a songwriter who is gingerly coming into her own. A touch shy in moments, she seemed much more at ease when invited Ria Mae and Margot Durling on-stage to sing harmonies with her on, “All I Ever Wanted.” “Now it’s back to awkward time with Natasha Peach,” she says, as the twosome left the stage.
Given more time spent below the glow of the spotlight, Peach could chart along Canadian pop pianists such as Sarah Slean and Chantal Kreviazuk.

Down the street a congregation of listeners gathered at St. Patrick’s Church eagerly sat rubbing their cold hands together in anticipation of the Good Lovelies. The Toronto-based trio charmed us last year at the Company House, but to soak in their buttery harmonies within the acoustics of St. Pat’s was a treat even they singers themselves weren’t prepared for. Clad in heels and black dresses, the trio’s —Caroline Brooks, Kerri Ough and Sue Passmore —stunning vocals soared to the heights of the ornate ceilings of the old church and nestled perfectly into the ears of the captivated audience.

As they played “Baby, I Got My Way,” “Sleepwalkin,” “Lie Down,” and “February Song,” from their self-titled album, the chemistry and pure joy radiating off of each Good Lovely was infectious.

Though no one could prepare for their ethereal rendition of Leonard Cohen’s heavenly, “Hallelujah.” Even Ough seemed breathless once the final note echoed into the ether of the church.

“Wow, Leonard Cohen,” she whispered under her breath. There is a fantastic contrast between the Good Lovelies gorgeous songs and their girlish on-stage antics, it’s as if three best friends got together, decided to form a band and use touring as an excuse to have an endless slumber party. Confessional, coy and adorable, the Good Lovelies are exactly what they say: good and lovely, but also hilarious.

As they graciously praised Halifax for adopting them, they described Rose Cousins’ music so good that it will “make your heart barf.” Naturally once Cousins got on the stage she had something to say.

“You’re like three different types of berries, Good Lovelies. I want to mush you up, dehydrate you and make you into fruit roll-ups.”

Cousins’ is one of the finest performers of our time. With her heartfelt sentiments and dry humour, she’s a natural storyteller.

Whether she’s speaking to the loss of her grandmother who passed away at 91, dedicating a song to one of her dearest friends (she covered festival organizer Don Brownrigg’s “Along, Too,” on grand piano), or commenting on the tightness of Luke Doucet and Melissa McClelland’s jeans, it’s hard not to love her.

“Just to think this is Canada’s music power couple,” says Cousins, as Doucet and McClelland joined her on stage. “Both of them wear tight pants very well. I’m wearing the same pants just six sizes bigger.”

While Doucet artfully played electric guitar, Cousins performed a vast selection from her latest release, The Send Off, recorded this past September with the legendary guitar hero, including: “White Daisies,” “Celebrate,” “Mandolin Man,” Mary Margaret O’Hara’s “I Don’t Care and “I Were the Bird.”

“It was the last song written on the record,” says Cousins, recalling a summer week walking the north shore of her Prince Edward Island homelands —the place that sets her heart back in balance —watching the birds soar above the ocean.

“Halifax is the best place to grow and incubate,” says Cousins. “I’m so grateful to live here and to be a part of the In the Dead of Winter festival. I remember being one of the organizers in the first year with Heather Gibson, now I am just so lucky to be a friend of the festival.”