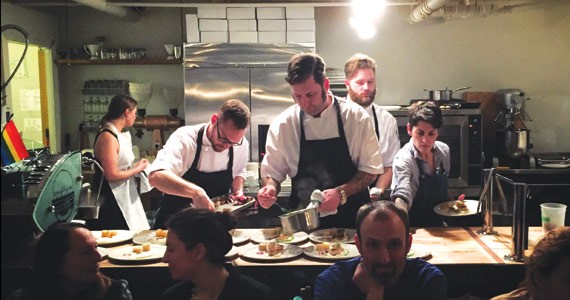 This weekend there's an event in Kelowna, British Columbia, called Gold Medal Plates. Every fall for the past handful of years, the Halifax qualifying round for this event has rolled into town, perhaps most notably bringing silver fox Jim Cuddy back to the Cunard Centre to remind everybody how great the song "Bad Timing" is. And then chefs compete for a prize nobody outside of the restaurant world really knows or cares anything about.

Gold Medal Plates is billed as the Canadian Culinary Championship in service of raising money for Canada's Olympic and Paralympic athletes. It's a gruelling competition that sees 11 chefs from across Canada execute three culinary challenges over two days, serving hundreds of guests and battling for a gold medal champion title.

Martin Ruiz Salvador is Nova Scotia's best chance of winning Gold Medal Plates. He's the only chance, really, since just one chef from Nova Scotia competes in the finals each year. But in the grand scope of the event—in the dozen years since it was founded—Ruiz Salvador has always been the best chance.

You can argue against Ruiz Salvador as the best chef in Nova Scotia if you want, but if you do, a better argument would be that you are a fool.

Renée Lavallée, chef/owner of The Canteen, competed at the Gold Medal Plates national level last year. "It gives you a bit of recognition," she says, "but really it gives you a chance to be creative, it makes you think on your feet, it challenges your problem-solving skills. It's a completely different ballgame. It brought out this other part of me that I never knew existed."

This year, the entire roster of chefs at the final competition have competed at the national level before. "It's like a master class," says Lavallée. "It takes a special person to be able to get out there and do it. To get there is one thing, but to do well out there is something else entirely. Especially this year."

This weekend will be Ruiz Salvador's third time competing, hopefully a charm. The first time he performed at the national competition, he came in fourth. Then for a few years Halifax wasn't a city in contention in the competition, but the event returned in 2013.

"I was asked if I was interested in being a judge and I was like 'No, I'm interested in competing again!' I was lucky enough to win Halifax again this year. At the national competition I really, really did not do very well: I forgot to put an item on in the black box, which basically eliminated me after the first day," he says. "This year we decided to take one more kick at the can.

"It's bizarre," he says of his ongoing interest in the event. "I'm the farthest thing from a competition chef. You have Team Nova Scotia or Team Canada, they have the Culinary Olympics and I certainly don't knock any of that but it's just not what I'm into. I just feel like I'm representing Fleur de Sel, you know? I like seeing our restaurant up against other restaurants."

I like seeing it, too. Because Fleur de Sel isn't just the best restaurant in Nova Scotia: it's one of the great Canadian restaurants.

Will anybody other than chefs really ever care about Gold Medal Plates? Probably not. But if you care about great food in Nova Scotia even a little bit, you should be cheering for Martin Ruiz Salvador.

"He said the other day he just wants to do his personal best," says Lavallée. "I know deep down he wants to win. And I think he can."

Best Restaurant (Outside The HRM)