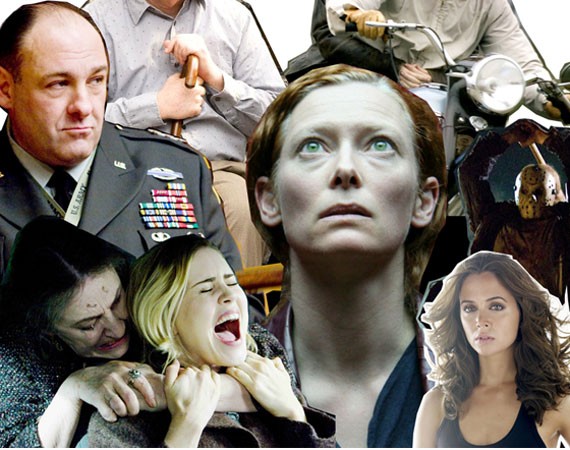 Sick of lame commentaries? Our film critics put special back into special features, with a list of the year's DVDs that feature a little somethin’ extra.

Button remains scattershot on second viewing, hampered by David Fincher's inability to believe in sentiment as much as technical wizardry. But the disc's three-hour making-of documentary sets a new quality standard for behind-the-scenes extras. DVD —MP

The never-aired, first-season Dollhouse finale boasted by this set is even more of a treat now that the low-rated Fox show has been officially cancelled. The episode, "Epitaph One," ambitiously jumps ahead in time, showing viewers the fates of many of the show's morally conflicted characters ---and where the slippery slope started by the people-pimping Dollhouse's ominous identity-replacing software eventually leads. (Also on Blu-ray.) —LM

The disc is wanting in extras, but the re-insertion of footage trimmed to get a PG-13 (totalling under a minute) lifts Drag Me to Hell's value in the Sam Raimi splatter pantheon. (Also on Blu-ray.) —MP

The first three entries of a mostly dismal slasher series have been released in earlier versions, but these special editions deliver the DVD and Blu-ray goods before things went sour. Part two remains the best of the lot, and number three, in cheesy 3-D for the first time on home video, is a fun TV-party disc. (Also on Blu-ray.) —MP

In the Loop (BBC Films)

Based on the British TV series The Thick of It, you'll want to pause the DVD while you laugh your ass off at the razor-sharp, political satire. Imagine Yes, Minister with added swears. —CK

Considering her otherworldly beauty and outre interests, it's remarkable how Tilda Swinton can convincingly portray American mundanity. Her Julia, here, a downward spiralling alcoholic embroiled in a kidnapping plot, is a bravura performance. —HT

The Last Days of Disco (Criterion)

This restored Criterion edition of director Whit Stillman's affectionate look at The Last Days of Disco will make you eager to befriend virtuous yuppies and go out dancing, and even more eager to write Stillman a letter encouraging him to start making movies again. —LM

The exhaustive six-hour story of the Pythons plays like an elegy for a now-rare type of comedy that values knowledge over pop culture-savvy and wordplay over snark. (Also on Blu-ray.) —HT

Night of the Creeps:Director's Cut (Sony)

Fred Dekker's cult '80s horror mash-up finally hits DVD and Blu-ray, and the surprise isn't that its shocks and laughs are pretty consistent. This is one "buried classic" the geeks weren't wrong about. (Also on Blu-ray.) —MP

The State: The Complete Series (MTV)

The Stella and Reno 911! alums who made up comedy troupe The State announced in November 2007 that a full-series set of their beloved MTV sketch show was ready to go (complete with commentary tracks and never-seen sketches). The series was finally released in July 2009, with some licensed music altered, but with the group's offbeat comedy entirely intact. —LM

One of the Synecdoche, New York disc's extras is a bloggers' roundtable that assembles a pile of smart movie scribes (including former Premiere writer Glenn Kenny) to chat about the film, and what they got from it---a great compass to use whilst attempting to navigate Charlie Kaufman's most Charlie Kaufman-y movie yet. (Also on Blu-ray.) —LM

While Season Five wasn't the best outing from Bravo's slicing, dicing and sous-vide-ing competition (that honour goes to Top Chef: Chicago, and humble winner Stephanie), it's the only season available on DVD. Plus, it totally features Fabio, my all-time favourite cheftestant---a charismatic Italian sound-bite machine who breaks his finger mid-competition and keeps cooking a round-winning chicken dinner anyway, declaring "This is Top Chef, not Top Pussy." —LM

Extra scenes in the DVD release include Hollis Mason's murder and other interstitial moments that help flesh out the R-rated superhero epic. Still no spot on the comic, but you have to admire the effort. —CK

The Wizard of Oz: 70th Anniversary

If you've ever seen a movie, chances are you've seen this one. Now spend the next year watching DVD extras about it. (Also on Blu-ray.) —MP